Breaking up with my type: How I learned to stop worrying and let myself loathe the men I once desired

Goodbye, finally, to all the tall, unshaven, record-obsessed hipster guys who treated me like trash 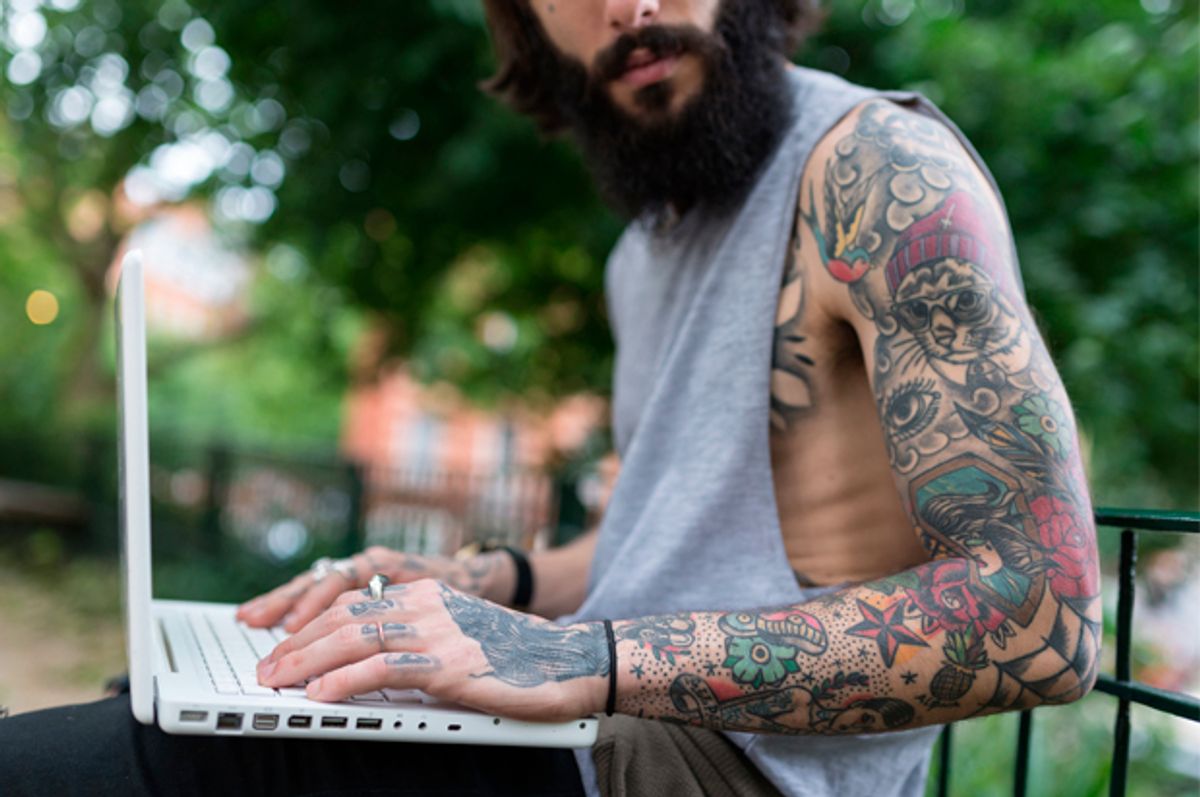 Realizing that you hate the people you want to sleep with is the adult version of learning that Santa Claus and the Easter Bunny and the tooth fairy don’t exist, all at once. It’s disappointing. But at some point you have to stop pretending.

For most of my 20s I had a type: tall, unshaven, record-obsessed hipster men who treated me like trash. Not the kind of trash you tie up neatly and respectfully bring to the curb every day. The kind of trash that gets stuck at the bottom of a dumpster soaked in some mysterious liquid and you pretend you don’t see because it’s too scary to acknowledge that you might one day have to confront its grossness.

I could pick them out of a bar like a game hunter on safari. Though to be fair, they weren’t hard to spot. My type wore, exclusively, distressed denim shirts, tight black jeans and colorless canvas sneakers. They were attractive but not in your typical way, in a way where their big nose or lanky build or asymmetrical haircut made me think I had discovered gold. And they always shared a name with at least one of The Beatles (if Ringo had been named Mike).

Because I am an idealist, my type was always about my age. I have a hard time opting into the current system whereby men can live half an adult life without considering another person’s emotions —until they turn 40, at which point they decide to start caring and then can freely choose from millions of unsuspecting women of any legal age. It’s a rule of principle not desire, and so it is more or less useless. I love salt-and-pepper-haired men, with distinguished creases and futon-less living rooms. But while this rule is probably the single biggest factor keeping me single as I continue to catch, then recover from, 30-somethings like colds, I refuse to be part of any system that perpetuates a cycle of inequality.

Men of my type were very confident. Not brazenly confident, like loud men in suits named Blake can be. Subtly confident, in a way where their opinions on "Pet Sounds," Lars von Trier, "Infinite Jest" and other things I taught myself to care about were indisputable. In a way where they could talk for hours about a particular photography project without ever thinking to ask if the other person was interested because of course they were. They weren’t loud as much as they were firm, perpetually in their own heads with unwavering conviction about what they liked and didn’t, and I loved that about them. I envied it.

I was always a tomboy. I liked cars and bikes and anything that got me dirty. But at what seemed like an arbitrary age to a girl who never really grew breasts, it came to my attention that girls shouldn’t like bikes and cars and things that got them dirty. And so the pattern began. Sneakers? No. Curly hair? No. Seconds of spaghetti? No way. I’m pretty sure I spent the next two decades trying to figure out what the hell I was supposed to want. And so for a long time my type was someone who could help me do that.

But my type would always end it by letting me know he “just wasn’t feeling it,” which usually coincided with some mid-tier life event like his 30th birthday or his best friend's wedding. These swift and silent breakups would leave me so utterly disconnected from what I assumed to be reality, where actions and words represented the thoughts of the people who perform them, and so completely distrusting of my ability to read social signals, like our late nights sharing secrets and his telling me he cared, that eventually I decided to stop dating altogether.

It was then, when I gave up on men completely, that I discovered the treasure — the pearls — that are 30-something female friendships. Around 30, I realized, was when single women got better and single men got worse. It’s the age when women have internalized and learned to deal with the injustice that comes with their gender; they get stronger and give fewer shits. Men, on the other hand, learn that their wrinkles are by some weird miracle considered attractive, as are their dad-like bodies, and that essentially the limits of time as we know it do not apply to them. They get spoiled.

My relationships with women were like a whole other species compared with my romantic flings. We traded honest stories of struggle. We empathized with years of pushing ourselves to be more aggressive with the men we worked with and more chill with the men we slept with. We’d learned to manipulate and contort our feelings so many times we were lion tamers of emotion. When we finished a bag of Kettle Chips in one sitting we reminded one another that we deserved it. We shared tips on body-hair removal and fears of infertility. I learned what real conversation felt like. We asked questions, admitted flaws; we listened to one another and let ourselves be vulnerable.

But emotional satisfaction alone can last only so long.

As I exchanged awkward hellos with my first real date in years, I was hopeful. He looked the part. But as soon as he started speaking things went haywire. He spoke unaffectedly for what felt like an hour about why bourbon was better than whiskey and didn’t seem to care or even notice that I would have rather been clearing glasses behind the bar than listening to his explanation.

The next date’s loud voice cut through the crowded cafe as he described his job with pride. I saw my former self like a ghost in some Christmas special, hanging on his words. But now the tone that once seemed so wise and admirable — because men are taught to brag and women are taught to smile — felt brash and unreflective to me. I could see him trying to feign interest in my job just enough to get another drink, but could tell by the shift in his eye as soon as I started that anything in the room was more interesting than the part of the conversation he had nothing to do with. I felt like I had x-ray vision glasses — some super power that allowed me to see beyond his artsy attire and firm opinions into a skeleton of self-importance.

On each date I found myself apologizing for our conversation desert and wondered how many times in a year, or in a decade even, it occurred to these tall men with messy hair and ratty tees to apologize to anyone for anything. If they ever felt an unbearable need to make every interaction pleasant for the other person, to the point of sacrificing their own interests one by one. If they ever experienced the overwhelming guilt that came from talking about themselves for more than two minutes without asking a deluge of reparatory questions, like the useless prompts I dished out to keep them interested and comfortable. The attraction first seeped out of me like a leaky pipe, then gushed out like an open fire hydrant.

Eventually, I met a man I liked. He seemed in touch with his feelings, self-aware and willing to admit weakness. After hours of juicy conversation, we broached the subject of sexual reciprocation.

“I’ve just been put in positions, over and over, where I’ve felt pressure to please men without any consideration of my own needs. So it’s kind of a trigger if a guy expects sex,” I explained, proud that I was finally able to articulate years of repression, thanks to my girlfriends.

He rolled his eyes.

Sometimes I wish I could erase my memories of the wasted hours I spent listening to their stories and quieting my own. But ignorance is not bliss.

Instead, over the past few years I’ve begun the process of redefining my sexual attraction. Ripping out all my Pavlovian responses like remodeling a house — a real fixer-upper. But I’m even pulling out the goddamn foundation. I'm wondering if maybe I don’t even want to date men. Maybe if I dig deep enough my love for women can move from the emotional to the physical.

Reconsidering and redefining my type to from scratch at a time when most people my age are having babies feels like starring in the bizarro version of the movie "Big" — an adult trapped in an adolescent's body. It’s terrifying and confusing and lonely. But any amount of discomfort is better than the alternative: sitting across the table, pretending to listen raptly for even one more minute to the men I called my type.