Donald Trump goes ugly at Pennsylvania rallies, just as news breaks that he may have paid no taxes for years 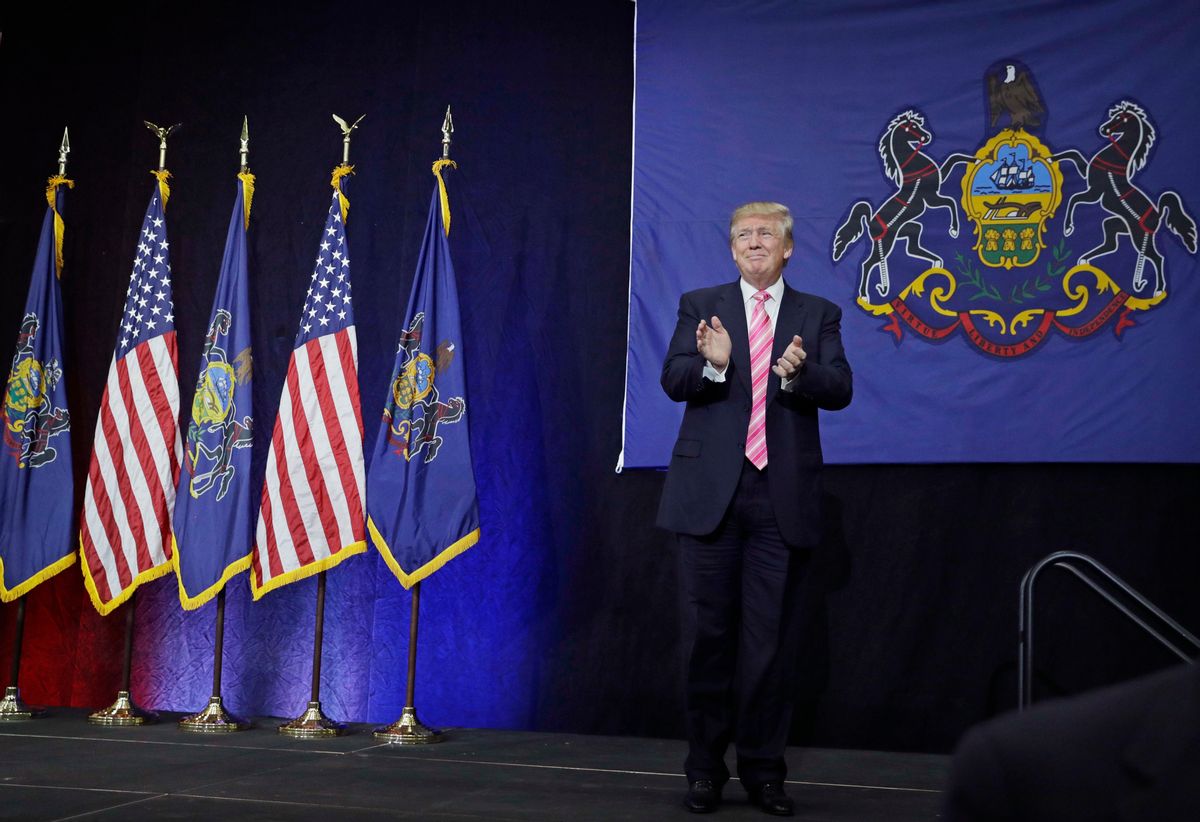 MANHEIM, Pa. -- Every four years we go through the same ritual of hyping Pennsylvania’s status as a battleground state before watching it go Democratic. Mitt Romney memorably spent some of his final moments as a presidential candidate in 2012 campaigning in the Philadelphia suburbs, leading more than a few gullible pundits to speculate that maybe something had shifted in the polls and Romney had a chance of tipping Pennsylvania into his column. He ended up losing the state by five percentage points.

It’s easy to understand why Republicans would want to make a play for Pennsylvania: the state isn’t as reliably Democratic as other so-called “blue wall” states, and it has a robust cache of 20 electoral votes. Poaching the state would hobble the Democratic candidate and send hot needles of panic throughout the party over the loss of a heavily unionized mid-Atlantic redoubt. But while the GOP has dominated the rural and suburban parts of the state, it just can’t seem to figure out how to overcome the Democrats’ huge advantages in Philadelphia, Pittsburgh and other urban areas.

Looking at the poll averages, Donald Trump is running fairly close to Hillary Clinton statewide — he’s within two points, per RealClearPolitics. At the same time, Democratic campaign veterans still think it’s out of reach for him. “[Hillary’s] not going to win Pennsylvania by 8 or 10,” Obama's 2008 campaign manager David Plouffe told Slate recently, “but Trump can’t win it.” Whatever chance Trump has relies on counties like Lancaster turning out in huge numbers. Lancaster is Republican as hell. It went for John McCain by 13 points in 2008, and Romney beat Obama there by nearly 20 points in 2012. That’s why Trump was here in Manheim on Saturday: to beseech a large crowd of supporters in this Republican stronghold to help him pull out a massive upset.

One theme I picked up on in talking to Trump supporters before the rally was a widespread recognition that Trump’s lack of discipline and focus on personal battles, especially his fight with former Miss Universe Alicia Machado in the week following the first debate, isn’t doing him any favors.

“I like him a lot, I just hope that he knocks off the crap,” said Julie Bayshore, a British-born immigrant to Lancaster County. “We don’t need him to be fighting over [Alicia Machado], we need him to be fighting for us.” Curt, a federal government employee from Baltimore who didn't want me to publish his last name, agreed. “He has that tendency sometimes of making some things too important, when he should be not focusing on that at all,” he said.

“I thought to myself, ‘Why is he up at 3 in the morning Twittering?’” said Lancaster County resident Tricia Lattimer, referring to Trump’s early-morning tweets about Machado and her (nonexistent) sex tape. “But then I thought, ‘Well, he doesn’t need as much sleep as Hillary Clinton.’ But he needs to let it go.”

Trump didn’t talk about Machado during his remarks here, but he carved out plenty of space for nonsense, minutiae and some nasty new rhetoric about Clinton’s personal life. “The recent debate, which I think I won, even though they gave me a bum mic,” Trump complained at one point, referring to the debate commission’s acknowledgment of some issues with Trump’s microphone. “They gave me a bum mic! And I gotta scream into the mic,” he continued. “How many people in this room think that maybe that was done on purpose?” (Many people did think exactly that.) He also went on an extended rehash of the media coverage of the Republican primary and his strength in the polls against GOP candidates he vanquished months ago, lashing out at “phony pundits” who were wrong about his chances.

When it came to Clinton, Trump was far nastier than he’s been in recent memory. “Here’s a woman, she’s supposed to fight all of these different things, and she can’t make it 15 feet to her car,” Trump said, mocking Clinton’s pneumonia-induced dizzy spell at a 9/11 memorial. “She’s got a bad temperament,” Trump said of Clinton. “She could be crazy. She could actually be crazy.” Trump quipped that Clinton “all but said that most of the country is racist, including the men and women of law enforcement," a flagrant distortion of her remarks at the debate about the problem of implicit bias in law enforcement and society in general. After re-litigating the FBI investigation into Clinton’s emails, Trump declared “she should be in prison,” moving toward the same rhetorical space as his supporters, who routinely chant, “Lock her up.”

What precipitated this sudden, venomous turn? Well, it’s possible that Trump is still feeling punchy from his debate loss, or that he was just getting bored and decided to crank things up a few extra notches. Alternatively, it might have had something to do with the fact that as Trump was speaking, the New York Times published a report detailing how two decades ago Trump declared nearly a billion dollars in casino losses as income, and as a result may well have paid zero federal income taxes ever since. (Trump’s campaign provided an official statement to the Times that notably did not deny any of that.)

Regardless, the mood among Trump’s Pennsylvania faithful was upbeat. They think he’s going to win the state, and everyone I talked to offered rationales, of varying degrees of plausibility, for how this will happen: secret hordes of Trump voters who haven’t been counted in the polls, the number of Trump-Pence yard signs in their neighborhoods, unexpected Trump strength with African-American voters or simply the incurable political optimism of early October in an election year.

Others had a slightly darker outlook. On the recommendation of his candidate, one Lancaster County Trump supporter I talked to was on the lookout for voter fraud, and was convinced that the Democrats were planning to steal the state from Trump. “I’ve been told there’s people in Philadelphia -- I know it’s happening in other places -- they take dead people’s votes and throw them in for Democrats,” he said. I asked if he thought Trump would win Pennsylvania. “I hope he does,” he said. “And if he doesn’t, I think it’s rigged.”