Ken Starr's karma: Donald Trump's planned Hillary Clinton attacks will take us back to the worst of the 1990s

As Trump threatens to go back to a petty political witch hunt, he should remember how those escapades ended 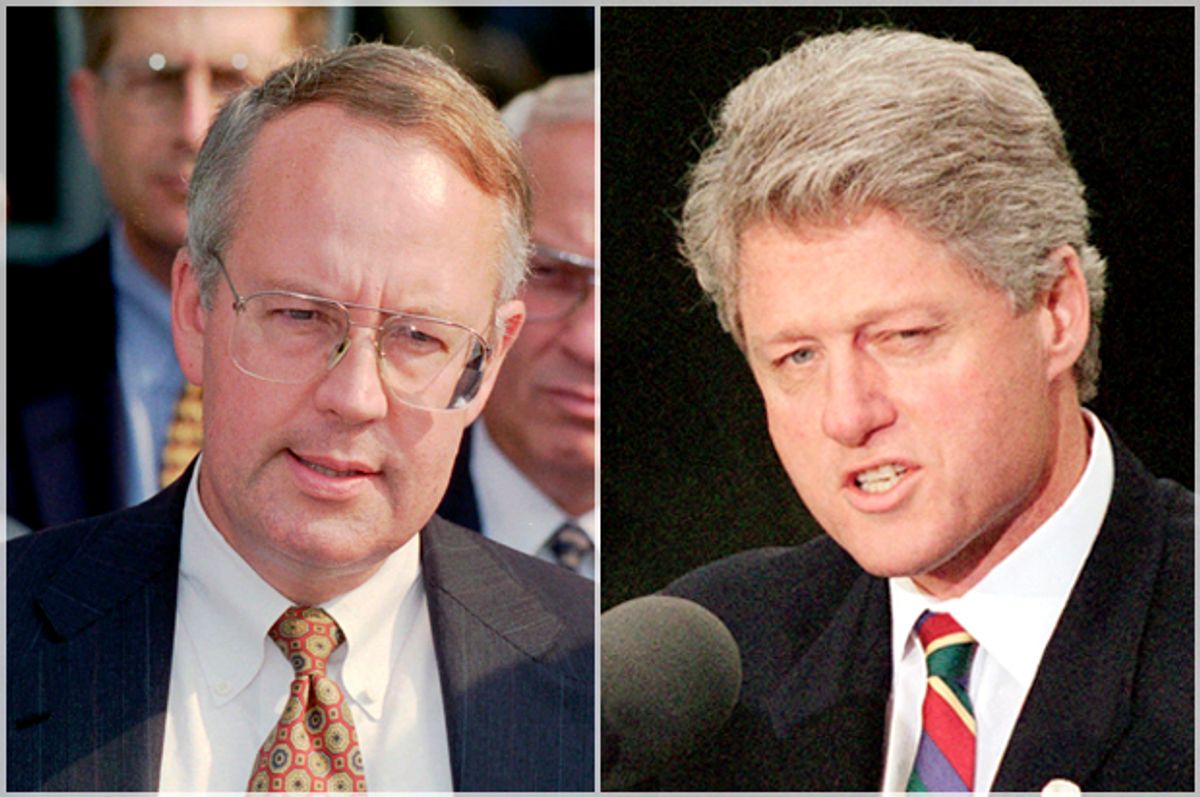 I suppose it was inevitable that with Hillary Clinton on the ballot we'd be spending some time looking back at the 1990s. It's fair enough that her record as first lady and work within her husband's administration would be examined. And yes, it was probably always in the cards that the right wing would break out the old scandal machinery to rehash some of the titillating sexcapades of yesteryear. It's always seemed to stimulate them.

Trump has taken it to a new level, of course. He is a boorish misogynist whose closest advisers are Roger Stone, a dirty-tricks master who wrote a work of fiction about Clinton's sex life; Roger Ailes, a legendary media strategist and recently revealed sexual harasser of epic proportions; Kellyanne Conway, one of the original Clinton character assassins; and David Bossie, whose career has been devoted to the destruction of Bill and Hillary Clinton. These are professional partisan operatives who have been working in the right-wing fever swamp for years. Of course they'd wind up working for Trump to defeat Hillary Clinton. It's what they do.

But I have to admit I find it just a little bit hilarious to see some of the Republican establishment figures of that period wringing their hands over what Trump has done to their party, as if there were absolutely no precedent for such tacky behavior. There absolutely is. I seem to recall that during those earlier times we had dignified statesmen like Rep. Dan Burton, R-Ind., who called the president a "scumbag" and famously "investigated" whether he or first lady Hillary Clinton had White House aide Vince Foster murdered by shooting a watermelon in his backyard. And then there was the gracious Sen. Jesse Helms, R-N.C., who suggested that President Clinton shouldn't come to any military bases in North Carolina without a bodyguard.

Those are just a couple of the colorful members of Congress who elevated the discourse back in those more genteel days before Trump came along and made everything so uncivil. And that was before independent counsel Kenneth Starr launched his crusade to bring down the president, in the process turning cable news into a cross between Jerry Springer and soft-core "Skinemax" movies.

Starr had been brought in after the first independent counsel, Robert Fisk, had failed to find any wrongdoing, which was unacceptable to the Republicans. So a partisan judicial panel fired Fisk and brought on Starr with a clear mandate to find something — or else. As independent counsel, he had unlimited authority and budget to investigate the president and anything he found in the course of that investigation. With the help of a network of Republican legal operatives and a couple of thoroughly odious backstabbers named Linda Tripp and Lucianne Goldberg, they managed to catch Clinton lying about an affair with a young White House employee named Monica Lewinsky. (She was not in fact an intern.) And the rest is history.

Starr's office leaked like a sieve throughout the investigation, dribbling out lurid details on a daily basis for an endless parade of former female prosecutors to pick over on cable news that night. From excited speculation about the famous blue dress to ruminating about whether the president had Peyronie's disease (you can Google it), these people spent months talking about sex on TV, all while adopting a laughably fatuous pose of moral superiority. It was an amazing spectacle.

But nothing could have prepared the nation for the official Starr Report that was delivered to Congress and immediately distributed on the internet. Instead of a dry legal brief, Starr, the former judge and Christian conservative who stood for rectitude, respectability and moral standards, had written a torrid, bodice-ripping romance novel. Here's a short excerpt:

According to Ms. Lewinsky, she and the President kissed. She unbuttoned her jacket; either she unhooked her bra or he lifted her bra up; and he touched her breasts with his hands and mouth. Ms. Lewinsky testified: "I believe he took a phone call ... and so we moved from the hallway into the back office .... [H]e put his hand down my pants and stimulated me manually in the genital area." While the President continued talking on the phone (Ms. Lewinsky understood that the caller was a Member of Congress or a Senator), she performed oral sex on him. He finished his call, and, a moment later, told Ms. Lewinsky to stop. In her recollection: "I told him that I wanted ... to complete that. And he said ... that he needed to wait until he trusted me more. And then I think he made a joke ... that he hadn't had that in a long time."

Everyone in the whole country gasped in horror as they devoured the "report" from the first page to the last. It was one of the most surreal episodes in American political history, right up there with 2016 and Donald Trump.

Let's just say that the "discourse" throughout this sorry episode wasn't exactly elevating, so perhaps it's fair to be a little bit jaundiced about the news that Starr now bemoans the decline of civility in presidential politics and claims he has deep regrets for what his prosecutorial zeal did to the legacy of Bill Clinton. He said, “It’s sad that the chapter is so rooted in the unpleasantness, as I used to call it, the recent unpleasantness."

"The unpleasantness" is one way to describe an out-of-control prosecutor who used every lever of state power to intimidate and coerce anyone he thought might be willing to testify against the president of the United States. It was very "unpleasant" for the people whose lives he destroyed in that process.

But as with so many of the Clinton accusers of that period, Ken Starr is now facing his own crucible. Hillary Clinton, the woman Starr humiliated before the whole world by putting his poorly written erotica about her husband's extramarital affair out for everyone to see, may be about to become the first woman president in history. Starr is facing an embarrassing sex scandal of his own from his time as chancellor of Baylor University, where he was accused of covering up rampant sexual assault by the football team. This stunning denouement has cost the former scourge of the Clinton administration his job and his reputation. At the risk of further polluting the discourse, I can't help but point out that karma's a bitch.