Trump tells Pennsylvania supporters to deputize themselves as poll watchers. What could possibly go wrong? 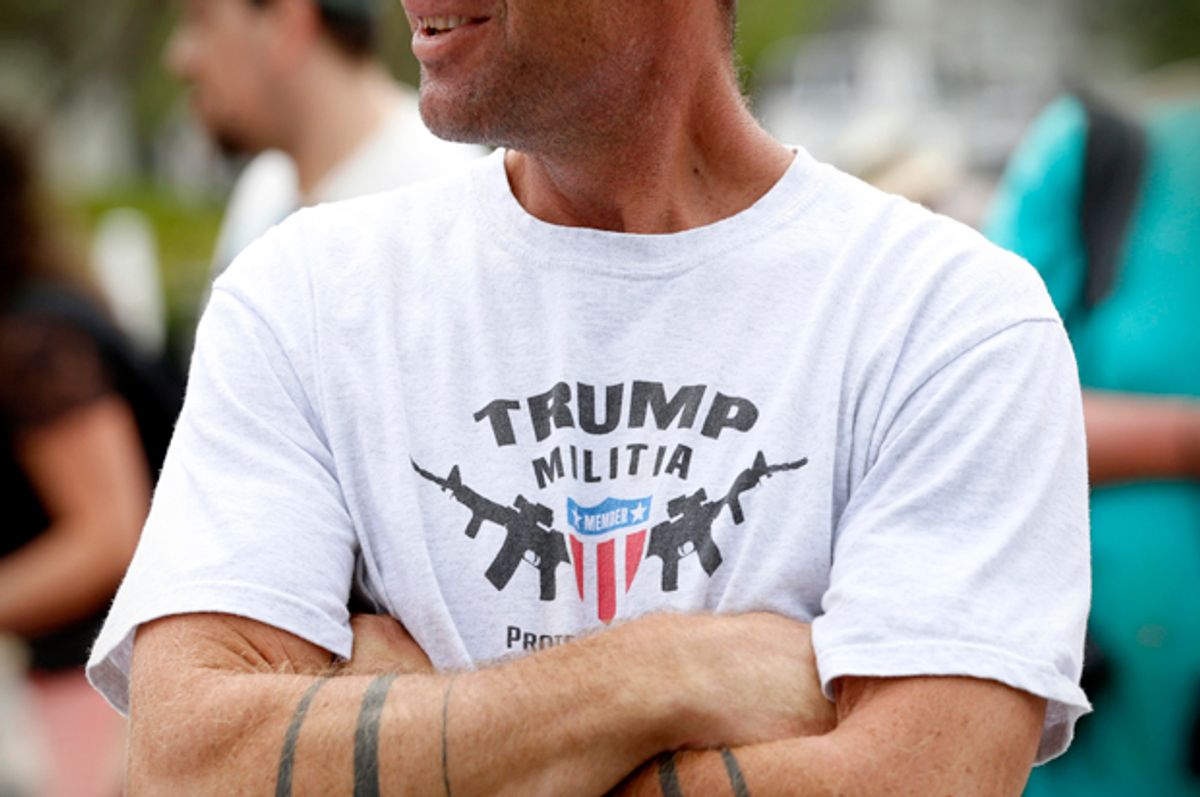 At several points throughout his campaign, Donald Trump has called for his supporters to organize themselves into vigilante election-integrity monitors. Building on the rich tradition of Republican “voter fraud” hysterics, Trump warns attendees at his rallies that unspecified funny business is happening at polling places in “certain areas,” and instructs them to cast their ballots and then head to one of those “certain areas” to make sure the election isn’t stolen from him.

Added Trump: “So go over and watch. And watch carefully because we're going to win the state of Pennsylvania.”

These rants often focus specifically on Pennsylvania, which Trump seems to believe he can snatch away from Democrat presidential nominee Hillary Clinton this cycle. The “certain areas” he's referring to are the state’s Democratic strongholds — urban centers like Philadelphia and Pittsburgh — where minority voters have given Democratic candidates an as-yet insurmountable edge in presidential elections, and where conservatives falsely claim rampant voter fraud is occurring.

It’s entirely possible that Trump supporters will be on the hunt for “voter fraud” in Pennsylvania on Election Day. That’s worrisome, as it raises the specter of voting-line confrontations and intimidation of voters.

The important thing to recognize is that people can't just deputize themselves a poll watcher. Under Pennsylvania state law, official poll watchers must be affiliated with a political campaign or party, and there are limits on how many watchers can be at a polling place at any given time. Poll watchers must be residents of the county that their assigned polling site is in. They typically undergo training and must be certified and credentialed in order to enter a polling place and perform their official duties.

“This idea of people coming and watching out of their own motivation is not something that would be legal,” said Adam Gitlin, counsel at the Brennan Center for Justice’s Democracy Program.

What Trump is talking about presumably is having his supporters go to polling places and loiter outside, keeping their eyes peeled for pernicious voter fraud. It’s not clear how that’s supposed to work, given that such self-appointed poll watchers would have no access to voter registries. Nor would they be empowered in any way to do anything about fraud, imaginary or otherwise. If they do show up, they’re just going to be conspicuously hanging out in heavily Democratic areas where they think voter fraud will occur. (State law requires that anyone who isn’t in line to vote remain 10 feet away from a polling place.)

That in and of itself is not voter intimidation. But if you have a group of people who are fed a story about election rigging, inflamed by the passions of the campaign and not familiar with election laws, you’re creating the conditions for intimidation to arise.

“There may be some folks who decide to follow the narrative of election rigging and to go outside their home precincts to intimidate voters,” Gitlin said. “That would be really unfortunate, because a lot of the time even the most well-meaning efforts to monitor elections . . . easily slip into illegal conduct.”

Things could get pretty hairy if Trump supporters show up at polling places with visible firearms. “If it’s just people with Trump signs who are out there . . . just saying, ‘Vote for Trump’ and maybe handing out literature, they have a First Amendment right to do that,” said Sara Rose, staff attorney for the American Civil Liberties Union of Pennsylvania.

“If people are just standing outside the polling place clearly having weapons, we think that’s intimidating and we’re going to take action,” Rose added.

The good news is that the ACLU and other election-integrity groups will have their own observers keeping tabs on polling places and looking for instances of voter intimidation. And Pennsylvania has a force of elected constables to make sure that no one is harassing, intimidating or hindering voters in any way.

Voters are also legally empowered to act if faced down by a gaggle of amateur Trump poll watchers who get out of hand. Pennsylvania state law states that “any three qualified electors of any election district” — meaning registered voters — “may call upon any mayor, chief burgess, sheriff, deputy sheriff, constable, deputy constable, or police officer . . . to maintain order and quell any disturbance, if such arises.”

So heads up, Pennsylvania voters: If a self-deputized Trump voter-integrity posse gets up in your face while you’re waiting to cast your ballot, these folks are breaking the law. If no help is immediately available, just grab the two nearest registered voters and let the authorities know what’s happening.