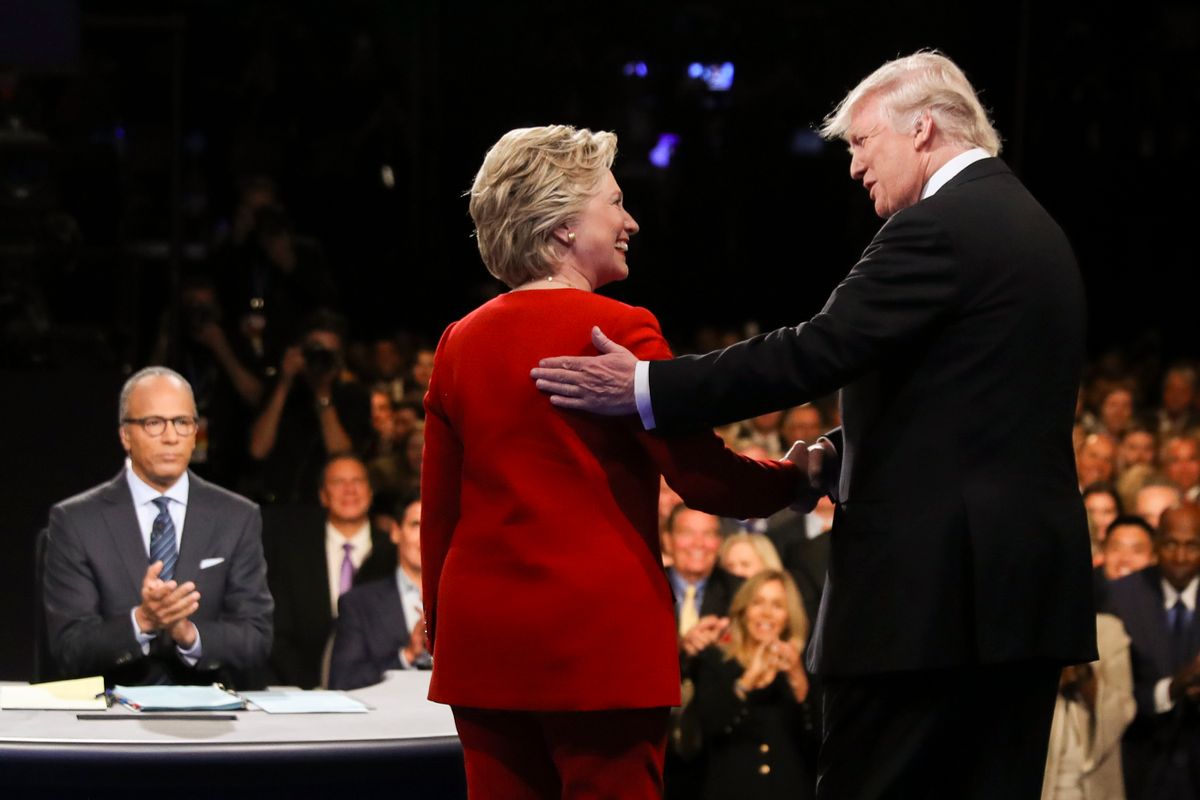 FILE - In this Sept. 26, 2016 file photo, Democratic presidential nominee Hillary Clinton and Republican presidential nominee Donald Trump shake hands during the presidential debate at Hofstra University in Hempstead, N.Y. For presidential candidates, the town hall debate is a test of stagecraft as much as substance. When Hillary Clinton and Donald Trump meet in the Sunday, Oct.9, 2016, contest, they’ll be fielding questions from undecided voters seated nearby. In an added dose of unpredictability, the format allows the candidates to move around the stage, putting them in unusually close proximity to each other. (Joe Raedle/Pool via AP, File) (AP)
--

For presidential candidates, a town hall debate is a test of stagecraft as much as substance. When Hillary Clinton and Donald Trump meet Sunday night in St. Louis, they'll be fielding questions from undecided voters seated nearby. In an added dose of unpredictability, the format allows the candidates to move around the stage, putting them in unusually close proximity.

"There's a lot more interaction, physical interaction," says Judd Gregg, the former New Hampshire senator who helped President George W. Bush prepare for debates. He said a candidate who is too aggressive in a town hall, either with the voters or a rival, "can come across looking really chippy, not looking presidential."

After an uneven showing in his first debate, Trump's candidacy may rise or fall on his ability to avoid falling into that trap. The Republican repeatedly interrupted Clinton in their opening contest and grew defensive as she challenged his business record and recited his demeaning comments about women.

Trump, who prefers drawing big crowds to rallies, has done only sporadic town halls and has rarely been challenged by voters face to face, except when his rallies are interrupted by protesters. In a nod to the challenge posed by Sunday's format, he agreed to advisers' suggestion that he get in some practice at a real town hall Thursday night in New Hampshire.

The GOP nominee has reviewed video of this year's first presidential debate, and his aides have stressed a need to stay calm and not let a Clinton attacks get under his skin in the second of three contests. The campaign has built in more rehearsal time ahead of Sunday's showdown in St. Louis. Trump has also listened to the counsel of New Jersey Gov. Chris Christie, who excelled at the town hall format during his failed presidential run.

Presidential town hall debates are typically serious affairs and lack the liveliness of campaign trail events. Still, Trump adviser Peter Navarro said he believes his candidate will be energized by engaging with voters.

"Everything about that first debate environment was alien to the Trump culture of high energy interaction with people," said Navarro, who has advised Trump on economic issues. "I think he'll feel much more comfortable."

Clinton is far more practiced at town halls and prefers smaller events with more direct voter engagement. Aides said she won't shy away from raising recent revelations about Trump's tax history or reminding voters of his pre-dawn Twitter attacks on a Miss Universe winner, but will aim to keep her focus more on the voters sitting on stage.

Seeking to raise the bar for the businessman, Clinton advisers said they do expect Trump to be more measured than in the last debate. They point to his calmer demeanor during last month's commander-in-chief forum, where the candidates appeared back-to-back and took questions both from a moderator and an in-person audience of voters.

"It's a situation where he can only probably get better in terms of coming off as more restrained," Clinton spokesman Brian Fallon said of the town hall format. "But even if he does show up little more disciplined than last time, I don't think he'll get a second chance to make a first impression."

The first town hall debate was held during the 1992 election and featured incumbent President George H.W. Bush and challenger Bill Clinton, along with third party candidate Ross Perot. As a voter stood to ask Bush about the national debt, the president glanced down at his watch — a fleeting moment but one that seemed to reinforce criticism that he didn't have empathy for Americans.

The wild card in the town hall debate is the physical choreography on stage. Candidates are seated but with no lectern or table to hide behind. They're given hand-held microphones and are free to roam the stage to answer questions or challenge each other.

Four years ago, Obama and Romney circled each other on stage throughout the night. During one particularly heated exchange, Romney kept moving toward the standing president until they were arguing with just a few feet between them.

During the 2000 election, George W. Bush was answering a question on leadership when Vice President Gore stood up from his char and walked unnaturally close to his Republican rival. Bush turned to Gore, and with a slightly puzzled look on his face, gave him a nod and smile. The audience broke into laughter.

That seemingly natural Bush reaction? It was well-rehearsed, according to Gregg, who played the role of Gore in Bush's debate prep. Gregg said he'd expected Gore would try to intimidate the Texas governor, so he practiced walking close to him during their mock debates.

"His reaction was the exact same with Al Gore as it was with me — to look at me with a bemused smile and move on to his answer," Gregg said. "We practiced."