Down goes the Trump-tanic! Republicans flee the wreckage — and the Clintons dodge a bullet

Schwarzenegger, McCain and other GOP bigwigs have finally had enough — and the damaged Clintons heave a huge sigh 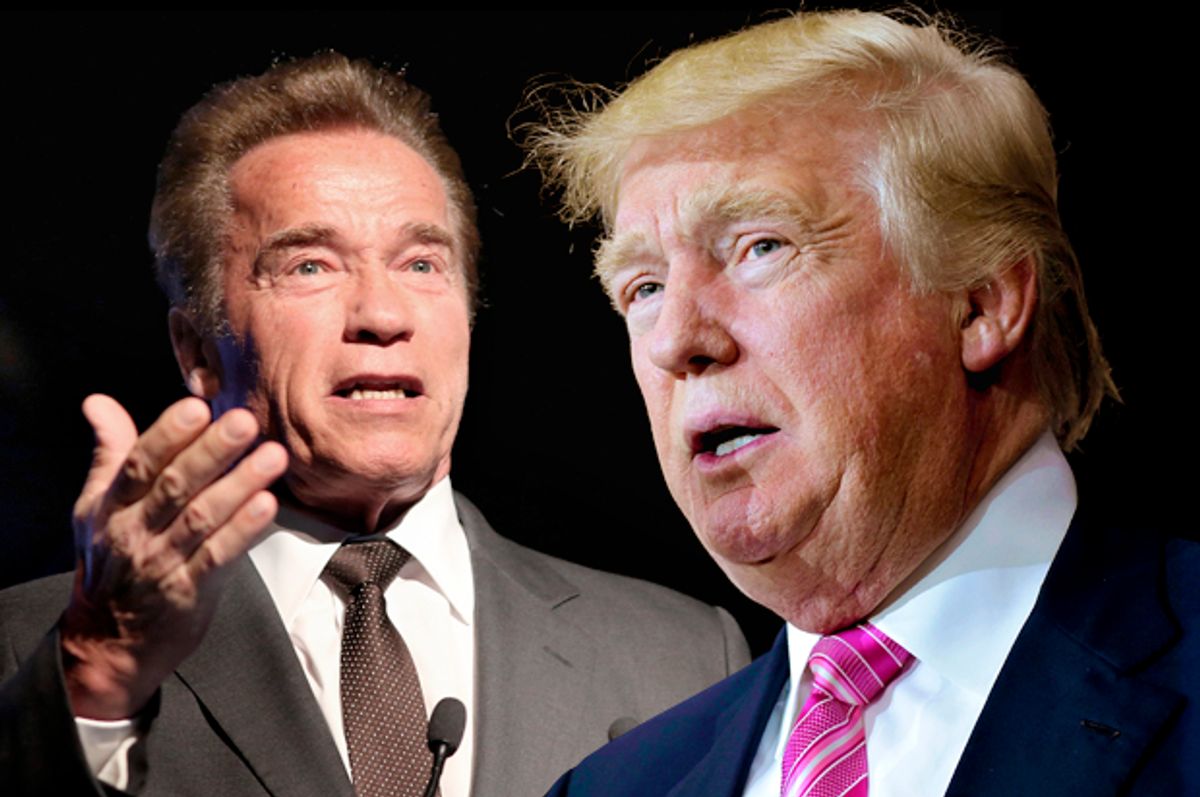 I originally intended to launch a semi-contrarian argument before the big debate this weekend that Bill Clinton’s troubling sexual history and the peculiar nature of the Clinton marriage were, if not legitimate campaign issues, at least legitimate areas of public concern. Even if Donald Trump -- who has repeatedly threatened to inject Clinton sleaze into the 2016 campaign -- was clearly the last person in the world who should raise them. After another weekend of nasty Trump revelations, I still believe that’s true. But the second part of the argument looks a lot more important than the first, am I right?

The only remotely surprising aspect of the 2005 recording acquired by the Washington Post, in which Trump boasts to an “Access Hollywood” host that his wealth and celebrity make him irresistible to beautiful women (“Grab ’em by the pussy. You can do anything”) is — well, OK, there’s nothing surprising about it whatsoever. Anyone who pretends to be shocked that Trump would say such things has either suffered a debilitating brain injury or is a hypocrite on a galactic scale. Both things would seem to describe the agonized predicament of the Republican Party, which is currently fluttering its dainty hands in the air and protesting that it had no idea the candidate so enthusiastically chosen by its voters was a hateful and odious sleazebag.

I was going to suggest that it’s somewhat surprising Trump allowed himself to be recorded saying those things, but that’s not true either. He is a smug, stupid, arrogant, preening Pork-Man from one of the minor moons of Jupiter, and you can’t expect him to conform to norms of human reasoning or even human self-interest. We have been in uncharted waters pretty much since the 2016 campaign began, and it’s already a worn-out cliché to say, “Just when you thought this race couldn’t get any weirder …” But it gets weirder. Now the water in that uncharted ocean has turned to toxic sludge, and Paul Ryan and Mitch McConnell find themselves marooned in a rowboat with a hideous orange goblin and no way out.

This thrilling ride on the Trump-tanic couldn’t be happening to a nicer and more deserving bunch of people, needless to say. All the two-faced sexual sanctimony and barely concealed misogyny Republicans have retailed for the last 40-odd years has come back around to bite them in their overfed collective ass. I honestly don’t think this is a victory for women or Democrats or feminism or Hillary Clinton, or indeed for anyone or anything else. As I have explored at length in previous columns, I believe the ruination of the Republican Party speaks to a deeper political dysfunction that also afflicts the Democrats, on a less obvious level.

But there’s no question that a certain mordant and satisfying justice is at work in this spectacular implosion, barely a month before the presidential election. All these mendacious right-wing clowns who love to quote from the Bible (without understanding its history or its layers of meaning in the slightest) might look to the admonition of Hosea 10:13: “You have plowed wickedness, you have reaped injustice, you have eaten the fruit of lies.” Now they’ve got lie-juice all over their faces, and streams of fire ants crawling up their legs.

As the New York Times gleefully reported on Saturday, prominent Republicans appear to be running in circles and shrieking, with no semblance of a plan. I mean, they didn’t have a plan before — the strategy was partly “pretend this isn’t happening” and partly “maybe we can tame him!” — but now they look even more like a gang of fools and tools. House Speaker Ryan disinvited Trump from a planned joint campaign appearance in Wisconsin but, in typical Ryan fashion, hasn’t yet decided whether to un-endorse the guy he visibly didn’t want to endorse in the first place. McConnell probably spent the weekend hiding the good silver and the expensive liquor behind the furniture in the Senate majority leader’s office, so Chuck Schumer’s staff will go nuts trying to find it in January.

John McCain now says he won’t vote for Trump, which makes the GOP standard-bearer 1-for-5, at best, among living Republican presidential nominees. (Mitt Romney and both George Bushes were already in the “pretend this isn’t happening” camp. Bob Dole, who is 93, has yet to be heard from this weekend.) Arnold Schwarzenegger says he won’t vote for Trump. Sen. John Thune of South Dakota, third-highest Republican in the Senate leadership, says he won't vote for Trump. Two staunchly conservative female House members who previously supported Trump, Barbara Comstock of Virginia and Martha Roby of Alabama, have called on him to withdraw. Sen. Mike Lee, Rep. Jason Chaffetz and virtually every other elected Republican from Utah have fled the spreading Trump contagion, raising the prospect that the nation’s only Mormon-majority state might support a Democrat (if only by default) for the first time in 52 years.

One of the first defectors from the Trump camp after the Post released the damaging video on Friday was Sen. Kelly Ayotte of New Hampshire, already facing a tight race in a state Clinton is almost certain to carry. Ayotte announced that she would write in Mike Pence’s name on Election Day, rather than voting for the guy at the top of the ticket. One can only hope the irony is not lost on Granite State voters: Pence’s personal life may be above reproach, and he does not indulge in overcaffeinated — or over-whatevered — Twitter feuds at 3 a.m. But if anything he is far worse than Trump when it comes to reproductive rights, gender equity, paid family leave, LGBT equality and other issues perceived as important to women.

After a 23-hour news blitzkrieg more intense and more bizarre than any other we have endured during the 2016 campaign, even Tic Tac — manufacturer of the ubiquitous breath mints in the clever little snap-top container — sought to dissociate itself from Trump’s endorsement. (“I’m going to use some Tic Tacs in case I start kissing her,” Trump tells Billy Bush in the Post’s video, apparently referring to the soap-opera actress arriving to escort him onto the set.) “Tic Tac respects all women,” tweeted @TicTacUSA on Saturday afternoon. “We find the recent statements and behavior completely inappropriate and acceptable.” Nicely done — particularly because completely unexplained. Someone, somewhere, will presumably see that tweet and have no idea what it refers to. Don’t you envy that person?

You just know that Bill Clinton saw that Tic Tac tweet and chortled into his mid-afternoon kale-and-bourbon smoothie. I was going to write this weekend that while I’m not interested in the details of the Clinton marriage, and I believe that with rare exceptions a politician’s personal life has nothing to do with his or her qualifications for office, there is nonetheless a disturbing penumbra surrounding Bill and Hillary as a couple. It distorts everyone’s perceptions of them — right-wing nutjobs, Bernie Sanders voters and everyone in between — and it does no good to pretend otherwise.

To be clear, I absolutely do not mean the Monica Lewinsky affair, which reflected an all-too-typical boomer male entitlement but was a consensual matter no worse and no better than the extramarital liaisons indulged in by many or most men in positions of power. For Rudy Giuliani and other Trump surrogates to hint that Bill Clinton’s relationship with Lewinsky was somehow abusive or bordering on rape is beyond insulting. I’m also not talking about the question occasionally raised by moralistic scolds: If Hillary’s such a feminist, how come she stayed with a guy who cheated on her repeatedly? Like a large proportion of the human race, I too have been a partner in a highly imperfect marriage, and I’m disinclined to throw stones. To coin a phrase, stuff happens — we all work it out as best we can.

But anyone who asks themselves seriously whether Bill Clinton has ever made comments similar to those Donald Trump made in that 2005 videotape, perhaps in less coarse or more gentlemanly language, can arrive at only one conclusion. And while some of the women who have leveled allegations of sexual misconduct against Bill Clinton over the years were plausibly pursuing money and fame, or have been so co-opted by conspiracy theorist and Trump ally Roger Stone and the right-wing hate machine that it’s impossible to evaluate their stories, that isn’t true of all of them. For progressives and Hillary Clinton supporters, the case of Juanita Broaddrick, who has long insisted that Bill Clinton raped her in a hotel room in 1978, is especially nettlesome.

Broaddrick has herself become an instrument of the Clinton-loathing right and the 2016 Trump campaign, but that only happened after she re-emerged from years of silence, enraged by Hillary Clinton’s comment last November that “every survivor of sexual assault deserves to be heard, believed and supported.” (A similar phrase has subsequently been excised from Clinton's campaign website.) When Hillary was asked whether the women who had accused her husband of sexual misconduct should be believed as well, she pretty much stepped in it: “Well, I would say that everybody should be believed at first until they are disbelieved based on evidence.”

Of course it’s true that no one other than Broaddrick and Bill Clinton will ever know exactly what happened between them in that Little Rock hotel room 38 years ago -- but isn’t that the sort of he-said, she-said dismissal enlightened progressives are not supposed to make anymore? If Broaddrick’s allegation that Hillary Clinton sought to silence her after the fact is flimsy in the extreme, her story about what Bill Clinton did to her, and how he behaved afterwards, has been remarkably consistent and seems all too plausible. (There are several good articles about the ambiguities of the Broaddrick case; Katie Baker’s for Buzzfeed might be the most thorough and thoughtful.)

I’m not suggesting that any clear conclusion is available about the Broaddrick case or the other allegations surrounding Bill Clinton, and I am certainly not suggesting some moral equivalence between Hillary Clinton — whose lifetime of work on behalf of women’s rights and children’s welfare has been honorable and clear — and the noxious cloud of evil and nothingness that is Donald Trump. But the argument that the Clintons are a ruthless power couple who are happy to run over anyone who gets in their way is difficult to refute, and is one of the principal reasons why Hillary Clinton’s race against a fatuous and unqualified nonentity has been so close (at least until now). Or to reiterate what has become increasingly obvious through this crazy campaign year, Democrats suffer from the same delusional hypocrisy as Republicans, just in a less grotesque form.