ABC's "American Housewife": Your funny TV friend who wants to have her cake and feel bad about it, too

ABC's new comedy could be the inheritor to its classic series "Roseanne," if only it loses its weight issues 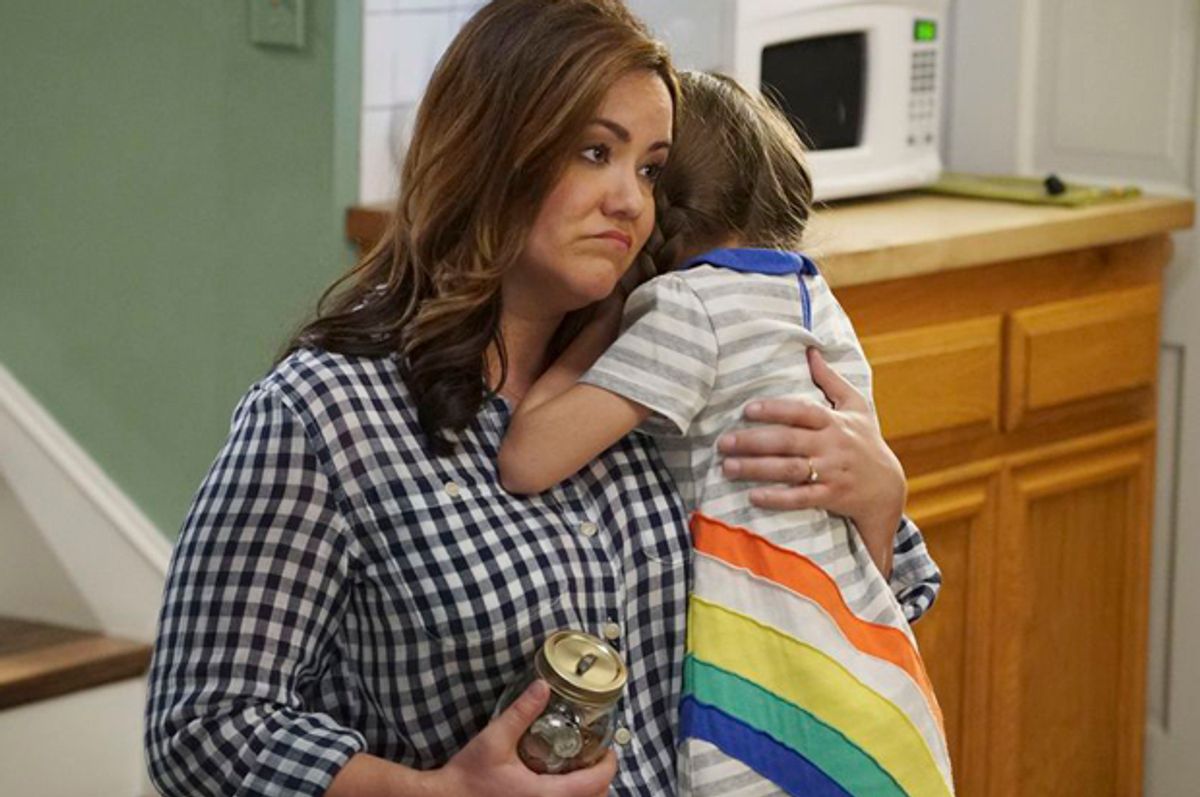 When ABC set a premiere date for “American Housewife,” debuting at 8:30 p.m. tonight, the network could not have known that the show would arrive right in the middle of an election season that’s come to be defined by one presidential candidate’s brazen misogyny and how complicit his political party and media have been in enabling it.

Before Republican presidential nominee Donald Trump was heard bragging about groping women in an 11-year-old video, he had already denigrated a former Miss Universe winner for gaining weight, back when she reigned and now. He had also gone on record insulting the size and looks of other women, most famously Rosie O’Donnell.

All of this merits mentioning because when we meet the titular housewife, Katie Otto (played by Katy Mixon), she is glumly staring at the gigantic house across the street from hers that just went on the market. Katie informs us via voice-over that said house is currently occupied by a woman she calls “Fat Pam.”

“And once Fat Pam is gone,” Katie reveals in her first voice-over narration, “I’m going to be the second fattest housewife in Westport.”

“American Housewife” is bound to instill mixed emotions in anyone who has ever dealt with weight issues. In a country where 69 percent of the population falls into the category of overweight or obese, that means most of us can relate to Katie’s situation. And Mixon, a demonstrably funny woman blessed with terrific timing and a tremendous knack for physical humor, makes it easy to forgive the show’s initial flaws.

Katie is a brave, witty proxy for those of us who have endured the sort of sugarcoated indignities to which she’s subjected, although said viewers may wish they had her unapologetic cheer and lightning-quick comebacks. (They don’t have a room full of comedy writers filling her mouth with perfect dialogue.) She happens to be overweight because she’s a harried woman who passed three humans through her body and doesn’t have the time or the financial resources to focus on herself.

Women of America, she is us.

At the same time, the pilot rarely passes up an opportunity to remind the viewer how uncomfortable Katie is with her body. She loves food but flagellates herself in her private moments or when she’s with her loving husband Jeff (Diedrich Bader) or in the company is her fellow outsiders Angela (Carly Hughes) and Doris (Ali Wong).

Curiously, when Katie shares her concerns about sliding into the second fattest position with her pals, they’re only slightly comforting. You see, while Angela and Doris are minorities in the very rich and white town of Westport, Connecticut, Katie sticks out like a walking cheat day in a land of green drinks and Fitbits because she’s also a renter.

Those twin shames lead her feel the judgment of the skinnier, yoga-tautened mothers every time she takes her kids to school, women who call her “real” to her face in a tone that lets her know that “real” is Westport mommy code for “You shouldn’t be eating that, or driving that, and I saw you unbutton your pants at that stop sign.”

In this season of miserable messaging connecting a woman’s size to her worth, whether on TV series such as NBC’s “This is Us” or on the campaign trail, “American Housewife” is a curious dish. Katie Otto is by no means a wilting, lonely wallflower. In fact, her husband treats her body like a playground, even reacting with sex-crazed glee at finding out that she’s wearing Spanx. She’s the viewer’s ally, the personification of the average woman’s frustration with having unrealistic standards of behavior, diet and beauty forced down her throat.

“When did it become OK for women our age to do nothing but diet and work out?” she asks, while observing one of her slender neighbors. “It’s all those damn fools do! It’s completely absurd and a total waste of feminine energy! I object to it. Deeply, and on every level.”

That’s Katie’s confident outside voice. But her inside voice carries the series, in yet another example of the voice-over narration favored by ABC, and that voice is nowhere nearly as kind to Katie — although its caustic tone about everyone else sure is entertaining.

Where “American Housewife” shows promise is in its focus on the comedy within Westport’s class and economic divide, as well as the sacrifices women must to make in choosing have children.

The only reason Katie and her family are in this stuck-up town is that the schools are great, particularly for her youngest Anna-Kat (Julia Butters), who is a germaphobe with unspecified special needs. At the same time Katie worries about the lasting effects the place will leave on her older kids Taylor (Meg Donnelly), who is budding into precisely the kind of woman Katie despises, and her materialistic son Oliver (Daniel DiMaggio, doing his best to channel Alex P. Keaton).

Then again, she would have more to worry about if she weren’t there to take those phone calls from teachers and participate in parent functions at school.

And we witness the price of Katie’s focus on parenting in the show’s more lighthearted second episode, titled “The Nap,” which takes on the choice of raising a family over having a career. “American Housewife” is far from the first to examine the devalued nature of being a stay-at-home mom, but Mixon’s energy adds a freshness to the whole “Mommy wars” debate by filtering it through farce, climaxing to an exasperated moment that makes her yell to the skies, “I have a marketing degree from DUKE!”

Mixon was terrific in HBO’s “Eastbound & Down” and CBS’s “Mike & Molly,” and the strong comedic presence she brought to those shows carries the first two episodes of “American Housewife.” That talent may be the key to buying this new comedy some patience with the audience as it figures out what it wants to be.

For in the show’s finest moments, “American Housewife” feels like a modern inheritor to “Roseanne,” albeit with a central character with more pep and polish than Roseanne Conner. Roseanne and Dan Conner also had more important things to worry about than appearance or body image, a notion that hopefully will take root as ABC’s newest comedy rolls along.

Because as far as the premiere goes, interestingly enough, Katie inadvertently sums up its biggest potential turn-off in one devastatingly honest line: “It’s making me feel really bad about something that I don’t already feel great about in the first place — being fat.”