Trump's dog-whistle diatribe was this campaign's darkest hour, while Michelle Obama's speech was its finest 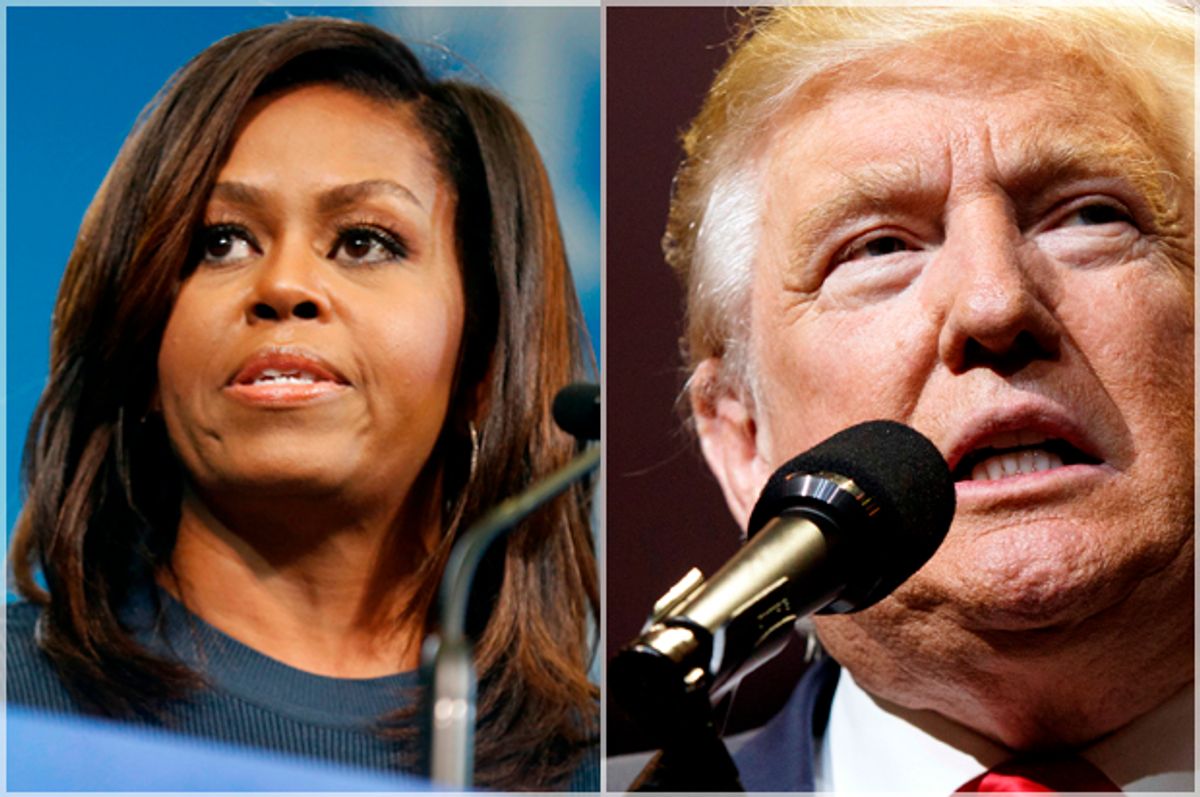 Everyone was anxiously waiting on Thursday morning to see how Republican presidential nominee Donald Trump would react to the cascade of new accusations of sexual abuse, misconduct and inappropriate commentary that came down on Wednesday night. His lawyer had threatened The New York Times with a lawsuit and the word on the street was that the campaign had decided to go nuclear.

But before Trump could deliver his scheduled speech to a West Palm Beach crowd, first lady Michelle Obama delivered one of her own in New Hampshire that put the whole issue into perspective. Surprising everyone, she decided to not give her usual stump speech and instead addressed Trump's treatment of women head-on, delivering the most emotionally raw remarks of her public career. With a voice that uncharacteristically shook at times, she patiently explained to a reeling nation how Trump's language and behavior sounds to millions of women and proclaimed this truth:

This is not normal. This is not politics as usual. This is disgraceful. It is intolerable. And it doesn't matter what party you belong to — Democrat, Republican, independent — no woman deserves to be treated this way. None of us deserves this kind of abuse.

Don't think she wasn't speaking about herself and the woman who is running to succeed her husband (as well as the rest of us). Both of them have been  subjected to flagrant misogyny from the right-wing fever swamps the moment they entered public life. During her years as first lady, Hillary Clinton was routinely demeaned and insulted for her looks, "manliness," voice and supposed inability to keep her man happy. Michelle Obama has been the object of sickening derision on both a sexist and a racist basis. In this election, you've seen the T-shirts that some Trump supporters are putting on their kids that say "Trump that bitch" and "Hillary sucks but not like Monica" —  and worse.

If Michelle Obama's speech was a call to the nation's conscience and a plea for principled men and women to take a stand for basic human decency, Donald Trump's speech delivered minutes later was something else entirely. It was not one of his extemporaneous ramblings. It was a scripted teleprompter speech, obviously written by Trump himself and his alt-right "campaign CEO" Steve Bannon. It was one of the most disturbing speeches he's given yet, and that's saying something.

Trump opened the speech with a full-blown conspiracy rant:

For those who control the levers of power in Washington and for the global special interests, they partner with these people that don't have your good in mind. Our campaign represents a true existential threat, like they haven't seen before. This is not simply another four-year election. This is a crossroads in the history of our civilization that will determine whether or not we, the people, reclaim control over our government.

Just look at what this corrupt establishment has done to cities like Detroit; Flint, Michigan; and rural towns in Pennsylvania, Ohio, North Carolina and all across our country. Take a look at what's going on. They've stripped away these towns bare and raided the wealth for themselves and taken our jobs away, out of our country, never to return unless I'm elected president. The Clinton machine is at the center of this power structure. We've seen this firsthand in the WikiLeaks documents in which Hillary Clinton meets in secret with international banks to plot the destruction of U.S. sovereignty in order to enrich these global financial powers, her special interest friends, and her donors.

To quote the late Molly Ivins, it sounded better in the original German.

It's tempting to believe that Trump may not understand all the allusions in that passage, but then he is known to have kept a book of Hitler's speeches by his bed so maybe he did. Either way, the alt-right anti-Semitic devil on his shoulder, Steve Bannon, certainly understood them, and you can bet that all the white nationalists and neo-Nazis who love Trump heard the soothing sounds of that dog whistle loud and clear.

Trump claimed the Clintons and the media are in cahoots to destroy him and then adamantly denied the accusations by nearly a dozen women that he had kissed, groped, fondled and otherwise sexually assaulted them over a 30-year period, despite the fact that he had been caught on tape bragging about doing all those things. He then took it to another level, accusing these women of being "horrible people; they're horrible, horrible liars." That's right; the same man who staged a televised stunt just four days ago in which he sanctimoniously slammed Democratic presidential nominee Hillary Clinton for supposedly trashing the reputations of assault victims, stood before the cameras and trashed the reputations of assault victims.

As if to prove Michelle Obama's searing description of the demeaning behavior that women are forced to put up with in this world, he even went so far as to intimate that one accuser wasn't beautiful enough for him to assault, a line similar to the one he used the day before when he said he didn't invade Clinton's space because he had "no interest, believe me" in being in close physical proximity to her.

That's what Michelle Obama was talking about when she said:

I have to tell you that I listen to all of this and I feel it so personally, and I'm sure that many of you do, too, particularly the women. The shameful comments about our bodies, the disrespect of our ambitions and intellect, the belief that you can do anything you want to a woman — it is cruel. It's frightening. And the truth is, it hurts. It hurts.

Elections are always national discussions about issues, culture, power and politics. But we've never had a conversation like this one. It's as if we're speaking different languages, in different dimensions. On Thursday, it was starkly revealed just how far apart we are.

Our first African-American first lady gave a heartfelt speech about women's experiences of misogyny and sexism and asked that people reject it and vote for the first woman president — for someone whom she described in glowing terms. Donald Trump delivered an angry, conspiratorial diatribe directed at his paranoid white nationalist base and then proceeded to prove himself to be the sexist lout we already knew he was.

If you were looking for two important speeches that symbolize the choice in this election, they were both delivered on the same day, within hours of each other. Let's hope the one that has the most lasting impact was the one delivered by Michelle Obama.