"Stay off the moors!": John Landis' "An American Werewolf in London" is a modern horror masterpiece

The gore-comedy for seen-it-all post-‘70s teens, full of rock & roll, sex and monsters, debuted in the dawn of MTV 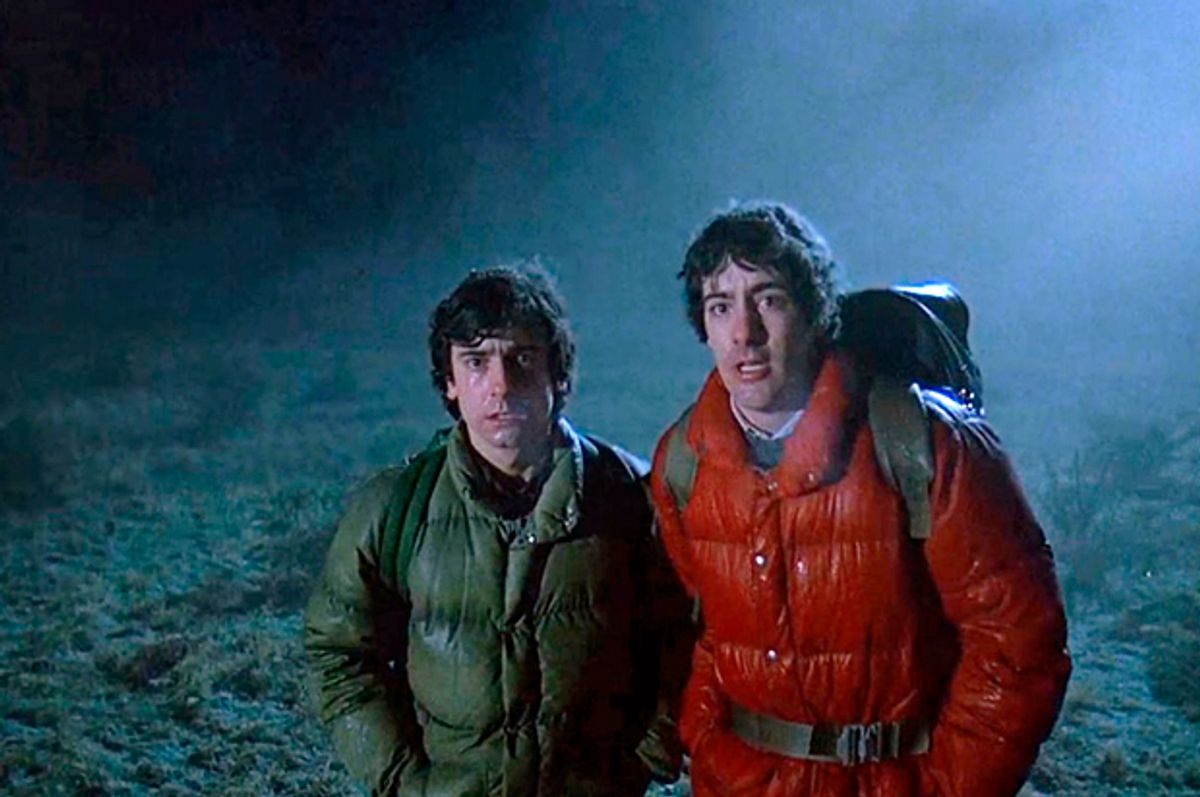 “Stay off the moors! Stick to the road.”

Good advice in life in general, but especially when you are backpacking through the misty north of England. It’s around this time of year, when the moon rises sooner and the air starts to chill, that I like to add some of the classic Universal Monster Movies to my queue: you know, “Dracula,” “Frankenstein,” “The Creature from the Black Lagoon.” To a population desensitized by the whole “Walking Dead”/”Fear the Walking Dead”/”Ash vs Evil Dead” culture — to be honest, I got jaded back in ’86 with “Re-Animator” — these movies from the ’30s, ’40s and ’50s can seem a little quaint, but there’s one Universal monster movie (while technically released in the early ’80s, it is a Universal movie about, well, scary monsters) that still shocks, thrills and does not seem at all dated. This year John Landis’ “An American Werewolf in London” turns 35 and there’s a new restored Blu Ray out now to celebrate. There’s much to be feted — there’s really nothing like it, nearly four decades on, just as there was nothing like it back in 1981 when it first hit theaters.

Let me drop a name here to make a point. Recently, I interviewed Dan Aykroyd for a book project. We were discussing Landis as a director and I expressed to Mr. A. that I thought Landis was underrated by many movie fans, who consider his pictures loud, vulgar and full of stunts, set pieces, pyrotechnics and a general lack of the subtle restraint or emotion that we’ve come to expect from our prestige filmmakers. Aykroyd countered that I was crazy, that Landis was a genius and that everyone knew it and loved his films: “Kentucky Fried Movie,” “Animal House,” “Blues Brothers” and later, following a debacle on the set of an adaptation of “The Twilight Zone” cult TV series, “Trading Places” and “Coming to America.” Aykroyd maintained that Landis was appropriately celebrated for his work.

This might be true. But even as a 12-year-old movie fan, the first time I saw “An American Werewolf in London” I wondered why the makers of this film were not Oscar-winning rebel mavericks beloved by the French. (“Werewolf” actually did win an Oscar in 1982 for Best Makeup and Hairstyling). I mean, just take the narrative and visual arc of Griffin Dunne’s character. Dunne later carved out a career playing buttoned-down yuppies (quintessentially so, in Martin Scorsese’s great 1985 black-comedy caper “After Hours” and opposite Madonna in 1987's “Who’s That Girl”). But in “Werewolf,” he is Jack, one of two Americans backpacking through the North of England. He and his best friend David (David Naughton) stop into a local pub, The Slaughtered Lamb, and fail to heed the advice of the locals — this despite a pentangle on the wall surrounded by candles. They order tea but leave abruptly and moments later Jack is a bloody, chewed up mess, flailing in the wet road and David is bitten by what he wrongly assumes is some kind of large, ill-tempered dog.

Jack perishes. David ends up in a London hospital treated by Jenny Agutter (this being the third in the Agutter-crush trilogy for Anglophile boys of the ’70s and ’80s, the first being “Logan’s Run” and the second being “Equus,” AKA the one with the horse, where she’s totally naked). David has hallucinations. He is running in the woods naked and kills a deer. His family is blown away by a squadron of door-to-door stormtroopers. (Ding dong, “Who’s there?”) That scene, by the way, is so loud and over the top that it certainly must account for Landis’ fun-over-feelings reputation.

Then David sees Jack at the end of his hospital bed, but he isn’t dreaming or tripping. Jack is really there, his flesh ripped open, his innards exposed, his ski jacket filthy. Jack is a talking, moldering corpse, and Jack asks for a piece of toast. This is the darkest of black comedy. “We were attacked by a lycanthrope,” Dunne’s Jack explains almost gleefully, “I was murdered — an unnatural death and now I walk the earth in limbo until the werewolf’s curse is lifted …”

Jack is not happy about his fate. “Have you ever talked to a corpse? It’s boring!”

He begs David to kill himself because otherwise, at the first full moon he will become a wolf.

Now, we know this is inevitable. But that doesn’t stop Jack from returning, and here’s the thing: Each time he does, he is that much closer to being a talking skeleton. Jack decomposes, and the less flesh on the bone there is, the funnier he becomes. Lon Chaney and Lon Chaney Jr. would have looked at this part of the script, shouted “What is this shit?,” torn it up and gone to Boardner’s for an early happy hour. But Landis goes there.

Makeup artist Rick Baker could have won the Oscar for that sequence alone, but the actual transformation was like nothing we’d seen in a monster movie before. We never experienced the vicarious pain of Bela Lugosi becoming a bat, or what it must feel like to be Boris Karloff, sewn together from robbed body parts and shot through with high voltage. But as the moon comes up and Naughton paces alone in Agutter’s small London flat, we see and feel every bit of the man-to-wolf shift: the elongation, the hair growth, the dental transformation. Every monster movie that comes after it, Cronenberg and the like, owes it a little debt.

Now, supposedly John Landis had the idea for “Werewolf” in the late ’60s as a pet project and didn’t get to make it until he had a few hits under his belt (or as Aykroyd rightly points out, a shitload of big crowd pleasers), but sometimes with a classic, it’s the timing that seals it. “An American Werewolf in London” is a real rock and roll movie. Naughton was something of a pop star, first of all. And secondly, it’s among the first films of the ’80s to use rock songs (in addition to Elmer Bernstein’s retro-style score) in a postmodern way.

Each act is marked by a version of the standard “Blue Moon.” The film opens with a lush rendition by Bobby Vinton. When David is fighting for his soul, we get Sam Cooke’s version, and the film closes with a rollicking doo-wop from The Marcels. Van Morrison’s “Moondance” plays as Naughton and Agutter fall in love and “Bad Moon Rising” by Creedence Clearwater Revival marks their consummation and last bit of happiness before David goes off to run amok in Piccadilly and meets his bloody end.

MTV premiered that same summer, and the second British invasion was in full swing. A horror comedy for seen-it-all post-’70s teens, full of rock and roll, gore, sex and monsters, seemed right on target. And while Landis had and would have bigger financial hits, none of his films, with perhaps the exception of “Animal House,” would feel so in the pocket culturally. So much so that when Michael Jackson, a belated product of the MTV revolution, was looking around to make, oh, just the biggest music video of all time, he turned to Landis and in many ways, the director’s baby, “An American Werewolf in London,” for inspiration. Re-watch “Thriller” after you track this film down and waste an hour and a half with it again. Don’t be a putz.