Lessons in the Calais Jungle: Teaching students has taught me about humanity 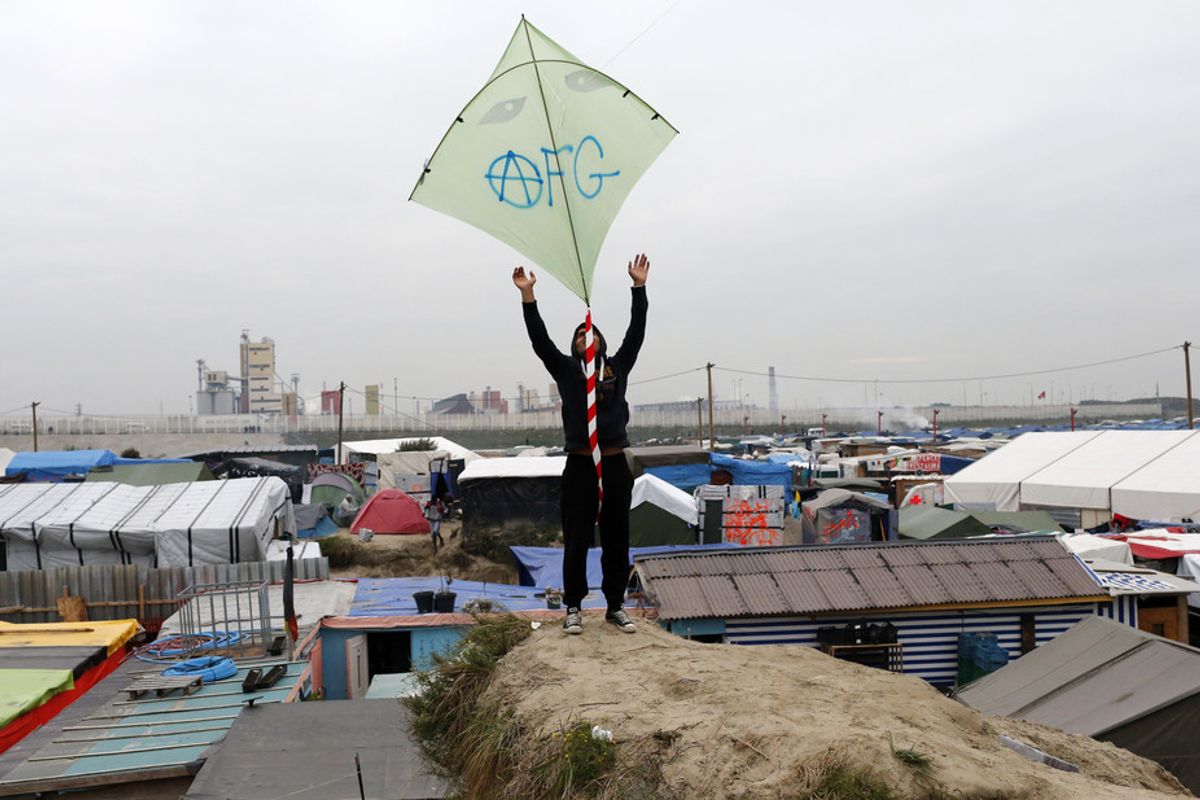 I am part of a team of academics teaching a course to residents in the Calais Jungle, a camp for migrants and refugees outside the French city. The course, Life Stories in the Jungle, has been running since November 2015. I travel with a team of colleagues and students from the University of East London to Calais on a regular basis to meet and recruit students in the camp, read relevant literature together — work by Nelson Mandela, Martin Luther King, Malcom X, Paulo Freire, Sojourner Truth, Malala Yousafzai and Barak Obama — and encourage them to tell their own stories. It is one of the first credited university courses provided to students in the camp.

Teaching in the Jungle requires a flexible approach and warm clothes, as few equipped classrooms are available. Timetables and schedules live their own life in the Jungle. Sometimes a class is a one-to-one discussion, reading of a text together or going over a student’s piece of writing. Other times it is a discussion spoken across several languages, with fragments of it translated back to English.

Stories have become a commodity

Students engage with the course and their own stories for different purposes. Some have been writing their stories and ideas and are looking for help and feedback for their writing style and with English. Others use the course to start writing in English for the first time. Some stories are visual — told through the media of photography and art. Many want their stories to be recorded and heard, but have been let down by the media as well as volunteers in the camp, who — perhaps with good intentions — collect stories just so that they can claim to represent the people inside of Jungle.

Stories have become a commodity that the residents of the Jungle are asked to trade, sometimes for favors and money, other times more subtly as part of other volunteer efforts. There are concerns around how some residents’ stories are publicized and the adverse impact they can have on their future status in Europe. In addition, for the students we meet, stories are an important part of identity — and the ownership of their stories means holding on to it.

The stories students write and tell for the course remain their own property. They are submitted as coursework and marked, but afterward students can decide to either publish them or not. Some do so through Facebook and other social media, others hold on to theirs for the future. Some are working together to write a book, "Voices from the Jungle," due to be published by Pluto Press next year. Many students benefit from support and feedback in developing their story telling, but the stories are not for us. Rather, through teaching techniques and styles of telling, and engaging with the stories of others through our readings, we encourage students to own their stories and decide for themselves how they are used.

As one student told me in early October: “The Jungle is the biggest education I have had.”

The French government plans to dismantle the camp by the end of October. It is said evictions will start on October 24. A last-minute attempt by a group of charities to stop the closure was just rejected by the French courts. There is concern over what will happen to those living there, particularly 600 unaccompanied minors. In May, the United Kingdom agreed to re-home some of these children, but it took until October before the first group of those with family in the United Kingdom to arrive.

This isn’t the first time the residents face uncertainty. Partial evictions and demolition of the camp took place in February 2016. In July, the French authorities announced the closure of all businesses operating in the camp. The restaurants and cafes, run by migrants and refugees, provide vital services like shelter, social spaces and electricity to residents while volunteers, visitors and others with the means pay for food and services. After an appeal, the decision to close businesses was overturned in August by the administrative court in Lille.

All of our students have faced regular intimidation and violence from the French police and tell us of hospital visits and sustained injuries. Armed police forces are often present in the camp when we teach, but so far have left us to operate in peace. A U.K.-sponsored wall is currently being constructed around the Calais port.

The conditions in the camp are inhumane and unsafe. Yet the camp provides many informal safety networks, community links and educational opportunities that aren’t available in official accommodation centers for asylum-seekers in France, or indeed the United Kingdom. Most of the students on our course want to continue their formal education, but will have to wait years to find sufficient funds, get required residency status or, for those remaining in France, sufficient proficiency in French to do so.

If the Jungle does indeed close by the end of October, we will continue to work with our students through social media as well as try to meet them where they end up from time to time. The officially recognized Grand Synthe camp in Dunkirk is likely to absorb some of the residents of Calais, as are other smaller camps in Dieppe and other neighboring towns, which may provide further possibilities to continue our work.

Lille University has accepted 80 camp residents to start their studies from late October with full scholarships, but hundreds more are looking for similar opportunities. European politicians and citizens worry about the integration, employability, and the cost of the refugees and migrants arriving in the European Union. My experiences of teaching students in the Jungle show that access to education immediately upon arrival is one of the most important solutions to all three of these concerns. More importantly, it is a human right.

Aura Lounasmaa is a lecturer at the Center for Narrative Research at the University of East London.