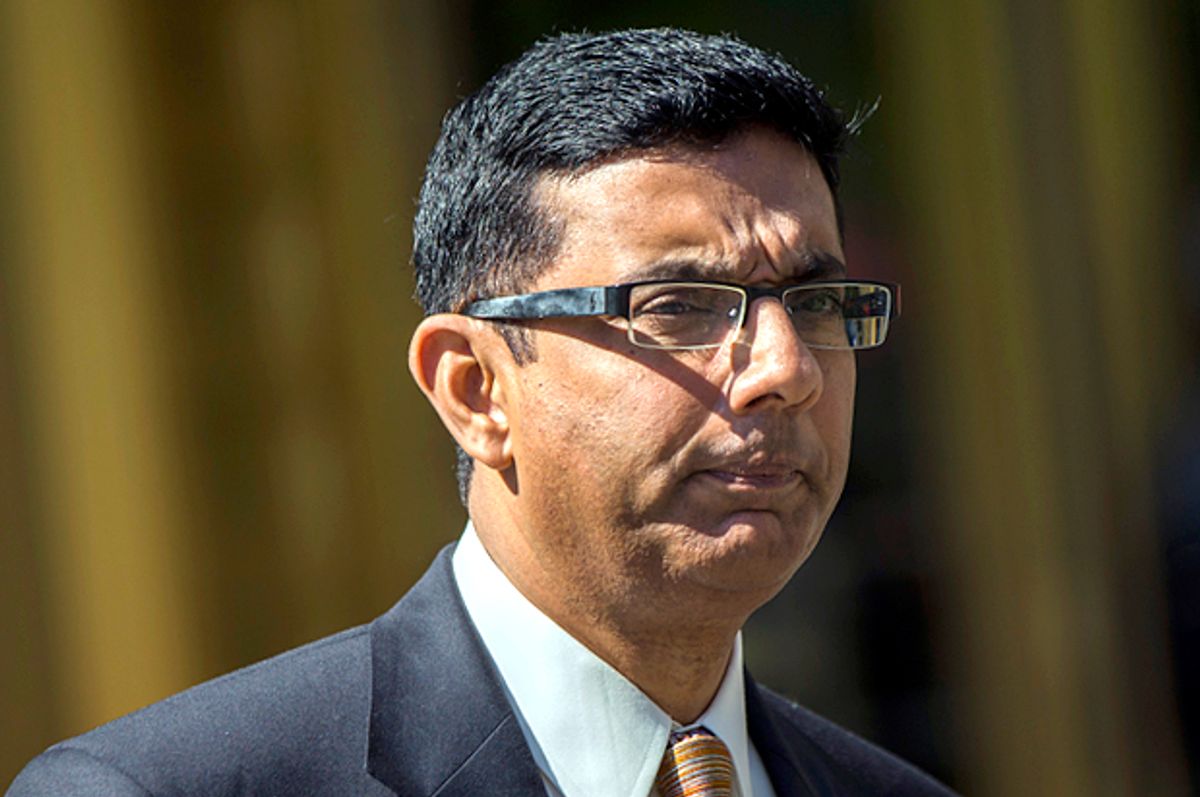 Dinesh D'Souza isn't just a convicted felon and adulterer. The filmmaker, right-wing pundit, defender of Donald Trump's right to access beauty pageant contestants' dressing rooms, and world's most racist amateur comedian is also generous in his praise toward those who are in his estimation great judges of character — in babies.

On Friday morning, Talking Points Memo's Josh Marshall tweeted, "When your friends abandon you and you become a felon, you apparently get bitter like this." It was a link to a now deleted tweet, but journalist Zachary Davies Boren posted a screen grab of D'Souza's alleged message. It was a photo of Barack Obama with the words "Obama's dad dumped him at birth & his mom got rid of him at the age of 10-did they know something we didn't when we signed up for this guy?"

And just when you thought this election cycle couldn't possibly be more triggering — for survivors of sexual harassment and abuse, for women who've had late-term abortions, for the LGBT community, for African-Americans, for Muslims, for Mexicans, for the terminally ill. Then along comes garbage fire with a mouth Dinesh D' Souza to find a whole new population to shock.

Like Barack Obama and our last Democratic president, Bill Clinton, I, too, had a father who "dumped" me at birth, so yeah, the outrage here is personal. It's a hell of a thing for a child to grow up trying to make sense of, and there's a hurt that never goes away. But I'd wager that most of the millions of Americans who have made it to adulthood in spite of absent or crappy parents have at some point reached a level of intellectual awareness that poor D'Souza (and you're probably reading this) never has: the understanding that it's not a baby's fault if a parent bails.

But the laughable irony of D'Souza's alleged message is that this a man who can safely be described as a poor decision-maker. While the married president of the Christian King's College, he was publicly traveling with his married girlfriend — a choice that Vanity Fair later tactfully referred to as "reckless." Two years ago he pleaded guilty to a campaign finance violation, after being accused of using "straw donors" to raise $20,000 in illegal contributions for New York Republican Wendy Long's Senate campaign.

He has in the past argued that the torture and abuse that went on at Abu Ghraib "reflected the sexual immodesty of liberal America." He's a man who wrote a book called "What's So Great About Christianity" who then reportedly goes on Twitter to shame abandoned children. And by the way, in the annals of punching down, that is what you will find at the very bottom of the list. Congratulations, you're literally a monster.

Imagine having that much rage and bitterness, as well as being just a total overall sad hack, mostly recently as the creator of a film described by one critic "the single dumbest documentary" he'd ever seen. It must get lonely, to have gone from actually being taken seriously a few years ago to being just another Twitter troll. And as D'Souza finds himself increasingly dumped by his former supporters, you've got to wonder, maybe they know something, huh?