"I was in the rescue boat with them. I saw the dead bodies": Documentary "Fire at Sea" captures the heartbreak of the migrant crisis 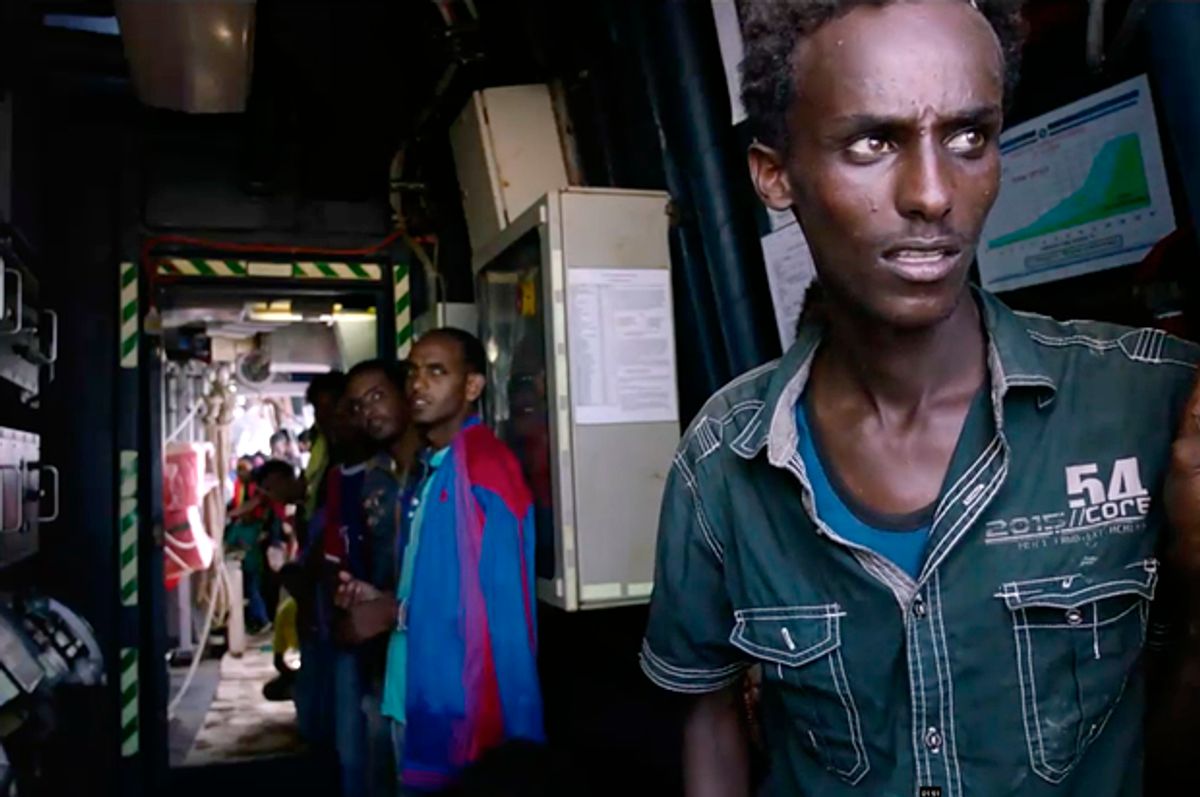 Gianfranco Rosi’s documentary “Fire at Sea,” which won the Golden Bear at the Berlin Film Festival and is Italy’s submission for the 2017 Academy Award for Best Foreign Language Film, takes an unusual approach to presenting the migrant crisis. Rosi captures the impact of African refugees hoping to get to Europe through their impact (or lack thereof) on a handful of inhabitants on the tiny island of Lampedusa, Italy.

“Fire at Sea” introduces viewers to Samuele, a young boy native to the island whose family consists of a long line of fishermen and Dr. Pietro Bartolo, who examines the African migrants who arrive in overcrowded boats with burns on their bodies from the diesel fuel. Other scenes depict the migrants on boats or in a detention center in contrast to the Italians’ life.

Rosi met with Salon to discuss his film and the topical issues “Fire at Sea” raises.

Let’s start with an icebreaker question: Did you get seasick like Samuele?

I got horribly seasick on the boat. I had to take pills. I was sick five times before Samuele was sick once. I thought I’d shoot the boat scenes many times to give the idea of seasickness, but I did one shoot.

What prompted you to take an observational approach [as] you did to this subject?

I don't like the word “observational.” The film seems observational, but it's about capturing the strong interactions that happen and the epiphanies. The camera is a membrane. I don't know what’s going to happen. It’s unexpected. I include that anxiety.

Before I film [someone] I spend so much time with that person. I don’t improvise. I wait to film something important happening, like the Nigerian group chanting in the detention center. I was in the rescue boat with them. I saw the dead bodies. I spent time in the port and the detention center with them. They invited me to the room where they were praying, and they let me film them.

Your style is to film them “as they are.” You don’t interview your subjects. Why?

I never ask questions. I try to grab a piece of life — a surprise moment of reality that no question can answer. I never asked a migrant a question except to [get permission] to film death.

The death is the witness to this moment in history — the human slaughter of [migrants] escaping Libya: 25,000 people died in 15 years trying to reach freedom. Many died being gassed on the boats by the engine. The third class on the boat is a death chamber. It’s important to show this reality to the world. It killed my inner world after I filmed that scene. [Gestures heartbreak]

I had no energy to go on filming. This 30-second scene is a monument to all death. It’s an extreme site of humanity.

Dr. Bartolo states, “It is our duty to help these people.” Your film gives a voice to that plea. Can you discuss this?

Dr. Bartolo's duty is to help us, the audience, accept death. To see something you don’t want to see. I want audiences to ask, “What can I do?” Art can create awareness. It's a cry for help.

There is a strong emphasis on voices in the film — from the calls for help from the migrant boats to the local DJ, who plays love songs, and Dr. Bartolo, who reports the burns of a refugee. Can you talk about how you portrayed and presented the various voices in the film?

It's like notes on a piece of music. [Draws musical notes in a notebook]

I film the distance between them; the silence. That creates enormous poetry. The scene of Dr. Bartolo giving Samuele a physical — no writer or actor could be so powerful. The passion and care of the doctor, the anxiety and trust of the kid — it's so profound. The reality is so strong.

They embody [people] we don’t see. They are archetypes beyond Lampedusa. Samuele and the doctor are ancient souls. The DJ listening to music — his face was telling you everything.

Yes, your minimalist aesthetic is really compelling. Can you describe your approach?

Subtraction is important in my world. Less is more. It’s like the artist Giacometti. [Draws a thin Giacometti-style figure in his notebook]. He would ask, “How thin can I make this [sculpture]?”

I ask, “How less can I go?” People will fill in what’s missing. We are surrounded by information. Observation is not enough in this world. I transform reality into emotional truth. My duty is to be as truthful as possible to the essence. I capture a moment — not what comes before or after it. I don't have to show before and after. You need to get rid of before and after to arrive at the essence of the scene.

You are nonjudgmental, keeping politics out of the film. Can you address that aspect?

There are no politics in the film. I leave space for it to be a part of the film without being ideological. The title “Fire at Sea” is the most political thing about the film. It's an oxymoron.

I show the harsh with lightness — like Italo Calvino — by using Samuele’s point of view. If I used Dr. Bartolo’s, it would be ideological. The kid is full of surprise and wonder. He has no contact with the migrants. The two worlds come together but they never touch.