When "no" means "let's negotiate": Why Salma Hayek's and Jessica Drake's claims about Donald Trump resonate with women 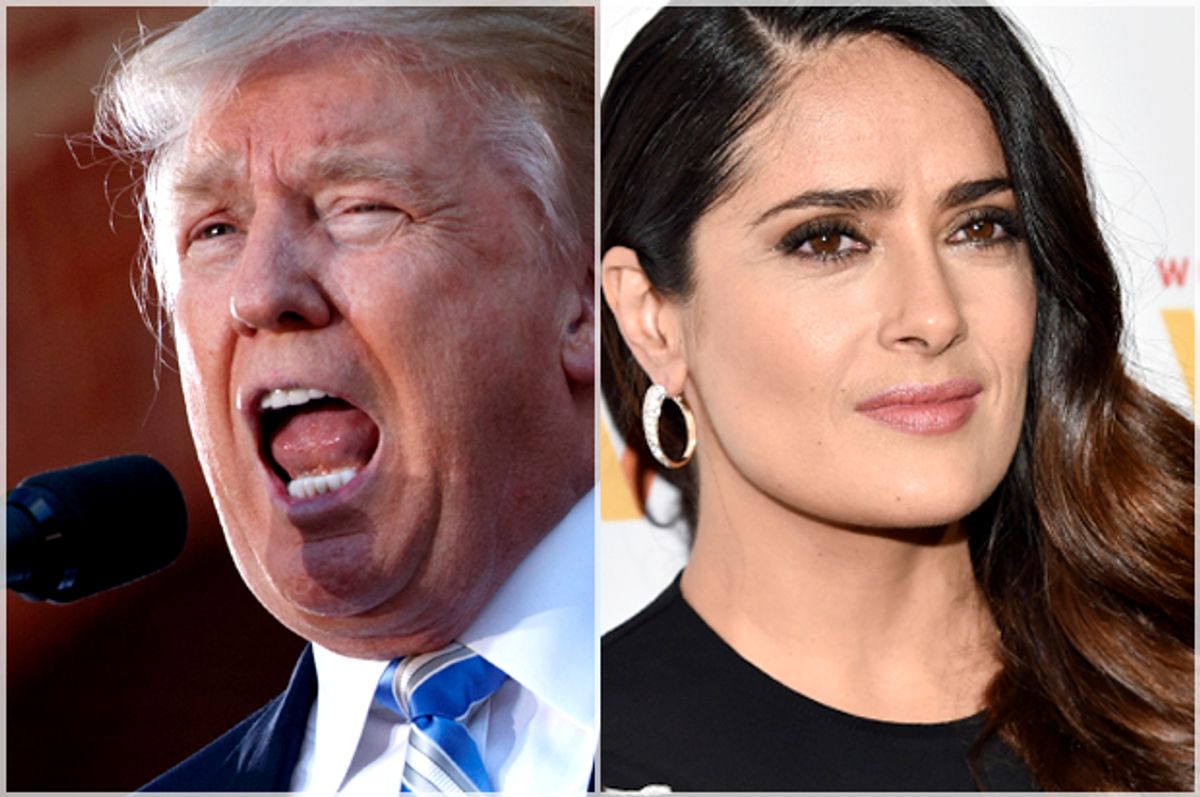 According to Hayek, Trump asked her out years ago although he was aware she had a boyfriend at the time. Trump obtained her phone number by pretending to be a friend of her boyfriend and continued to pursue the actress, to no avail. The National Enquirer later reported that Trump refused to go out with Hayek because she’s “too short.”

After the Enquirer story was published, Hayek said, she received yet another call from Trump, who she said feigned surprise at the bogus headline but suggested she accept his offer to go out with him because she wouldn’t want people to actually believe the story. Current speculation suggests that Trump planted the tabloid story himself. But that’s beside the point. Hayek said no and that should have been the end of it.

For adult film actress and director Jessica Drake, her multiple rejections of Trump were not met by sleazy tabloid headlines. Drake issued a statement over the weekend claiming that Trump had kissed her without her permission and then began to pursue her romantically.

Even if most men don't come armed with a tabloid or a private jet, a man stubbornly refusing to accept no as an answer is something most women have had to deal with at some point. The pursuit often doesn't end when a woman rejects or declines a man’s advances. The man will try again (and more aggressively) with offers of lavish dinners, extravagant dates, what have you, moving on to emotional manipulation like guilt trips or pity parties when a simple decline ought to be enough to put an end to unreciprocated advances.

And our language is partially to blame.

When a woman politely declines an invitation from a man, we say he's been exiled to "the friend zone." This suggests that if a woman is not open to a romantic or sexual relationship, her friendship, at least, should be up for grabs as a consolation prize of sorts. Presumably masculinity is so fragile that if a man is rejected romantically, the woman should be at least gracious enough to be available to him in some capacity. And from within the parameters of the "friendship," the romantic pursuit simply goes undercover.

The “friend zone,” my friends, is bullshit. It’s a concept designed to make a woman feel guilty or ashamed of exercising her right to say no.

Interested in this systematic shaming of women, I took to Facebook to ask my friends' thoughts on the friend zone. Overwhelmingly my female friends agreed that it is shaming to be accused of friend-zoning someone because there's a distinct level of guilt — like we're expected to acquiesce to romantic overtures.

The response often comes in the form of accusatory defensiveness: “I’m not good enough for you?” My male friends, on the other hand, had no problem with the concept — shocking. I think it's become a system that men have grown accustomed to, guilting women into accepting their company or responding aggressively or petulantly when their advances are politely rejected or rebuffed entirely.

One time a man whom I had no intention of being friends with or anything else chastised me after his not seeing me around lately. “You’re just always with your boyfriend” was his claim. As if that was not the point.

Many women have been there: A guy asks you out. You say no. He persists and it makes you uncomfortable. The close proximity of his face to yours, the way his body positions himself directly between you, the exit and everyone else on the other side of him, the unwelcome squeeze of the arm or hip or his hand on your lower back. And that’s just in person. There’s also the digital form via repeated texts and social-media "likes," comments, posts.

It’s not fun, and yet women are told to play nice and let men down gently. Not only is this frustrating but also misleading. The unwanted suitors often take the polite declines as a starting point for negotiations; when the woman isn’t flat-out rude, the man believes he might be able to wear her down.

And then there’s the shame women also receive for “being too nice” to a man they have rejected or have no romantic interest in. We’re told we’re too friendly or too naive about their intentions, for our own good. But that’s not it. Women know when a man is pursuing them, and we also know what can happen when a man receives an answer he didn’t want.

Margaret Atwood has that great line, “Men are afraid women will laugh at them. Women are afraid men will kill them,” which is as acerbic as it is true. Men don’t like rejection — no one does — and women have learned that there’s a reduced risk of harassment and violence if the friend-zone route is taken. But it’s a road we should turn our back on because it takes us in circles.

The friend zone isn’t a neutral waiting room women keep would-be suitors in until they make an offer we can’t refuse. It’s more punishing than that, like Penelope of Ithaca warding off puerile and violent advances of unwanted men while she weaves her tapestries. It’s only a matter of time before it all unravels.