Pwned by Putin: How the Russian despot ruthlessly trolled our so-called democracy 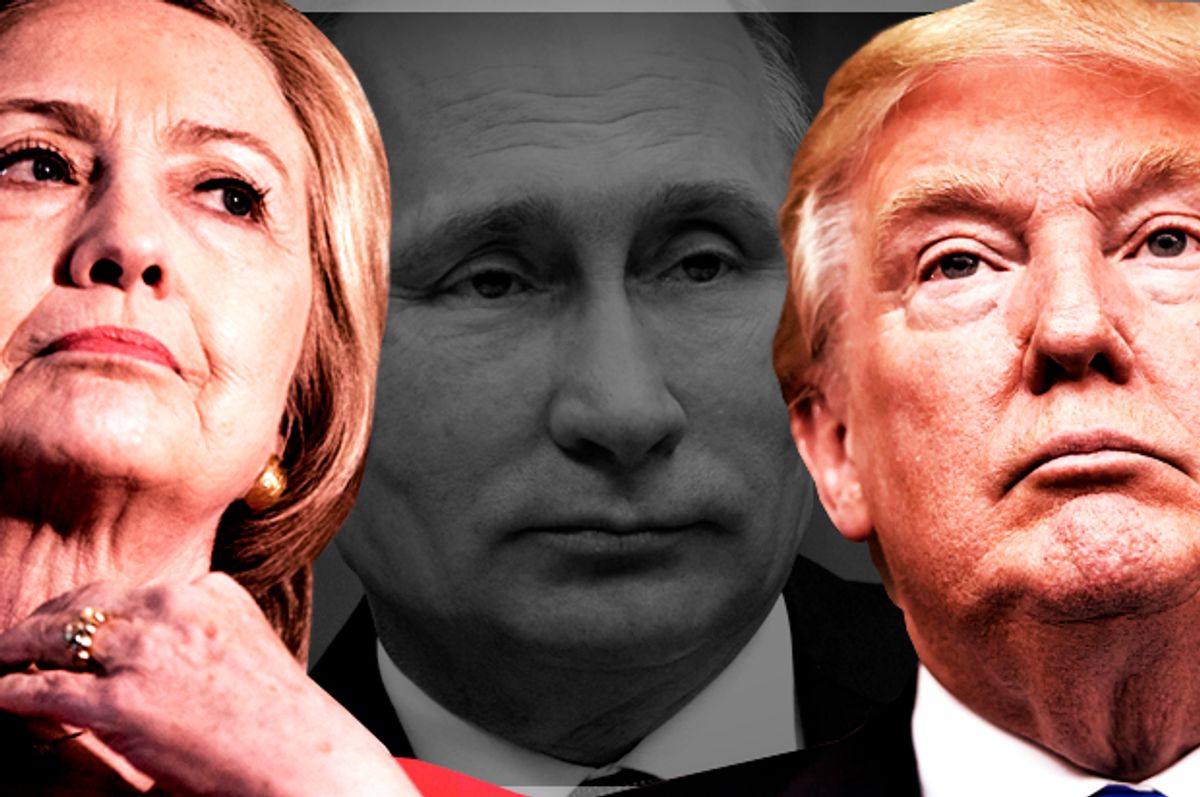 I do not claim to know what will happen on Nov. 8, and if this election campaign has had any positive effects amid all the carnage and chaos, it has at least taught the pundit class some humility. Wait, maybe that’s not a positive either: I recently heard New York Times columnist David Brooks on NPR, explaining that he has spent the last seven months wandering around the country trying to learn why he was so wrong about Donald Trump. On behalf of columnists everywhere, I can only offer a heartfelt apology to any citizen whose life has been invaded by that sanctimonious troll.

But Brooks’ internal WTF struggle is nonetheless understandable. I read FiveThirtyEight and the Upshot as compulsively as every other hapless political junkie, but Nate Silver’s overwhelming odds are somehow not reassuring. (Hillary Clinton has dropped below 80 percent since Wednesday: Widespread panic!) Maybe Michael Moore is right and there really is a gigantic but uncounted bloc of white proletarians, preparing to issue a giant Brexit-style “fuck you” to the bicoastal elites. Or maybe it’s simpler than that. We already know who has lost this election: our entire damn country. And we know who won: this year’s No. 1 Halloween goblin, Vladimir Putin himself.

I’m serious. For someone who seems kind of vain and small-minded and not especially bright, the Russian president has exercised a Voldemort-like level of control over this whole process. His meaty paws seem to be everywhere, moving pawns around the chessboard of America’s worst-ever election, and his manly visage lies behind every unlikely plot twist. Putin is the secret agent of history at work in 2016, proving conclusively that history is stupid. We’re all just microscopic cogs in his catastrophic plan, as Nick Cave once put it. He’s like Macavity the Mystery Cat, with beady eyes to match, everywhere and nowhere at the same time: You may seek him in the basement, you may look up in the air — but I tell you once and once again, Vladimir’s not there!

Putin took a few moments to deride American anxiety and political dysfunction during a speech this week at the Valdai forum in Sochi, the Black Sea port city that hosted an especially disastrous Winter Olympics a few years ago. He denied any effort to influence the U.S. presidential campaign and made international headlines by asking facetiously: “Is America a banana republic? America is a great power. If I’m wrong, correct me.” His hand-picked audience chortled, and not without reason; it was perhaps the sickest anti-American burn applied by a world leader since the days of Nikita Khrushchev. I believe the idiomatic American response would be: Dude!

I was more deeply struck, however, by Putin’s observation that paranoia about Russian influence was one of the “fictional, mythical problems that have created hysteria in the U.S.” Our country has numerous “acute and urgent problems, from its colossal state debt to the rise of gun violence,” Putin said, about which “the elite have nothing particular to say.” You don’t have to believe the Russian leader is innocent of all malicious intentions, or that he hasn’t been seeking to meddle in American politics, to agree that he kind of has a point there. This entire election campaign has been deeply idiotic and depressing, and try as we might it’s no good blaming him for that.

To put this another way, even if Putin has played a role behind the scenes in making America look like a banana republic, he couldn’t have done it if we hadn’t planted the banana groves ourselves. His purported actions have only exposed areas of American weakness and hypocrisy that were already there. Putin is an autocratic, pseudo-democratic despot with a record of suppressing free speech and making political opponents disappear, granted. Does that make him wrong when he observes that our so-called democracy is falling apart?

If you believe the U.S. government — which is always a perplexing question — then hackers working for Putin’s intelligence agencies presumably penetrated the Democratic National Committee’s computer network and then delivered its internal documents to WikiLeaks. But neither Putin nor Julian Assange is responsible for the fact that two successive Democratic Party chieftains apparently tried to tilt the primary race toward establishment fave-rave Hillary Clinton and away from insurgent Bernie Sanders. So far, interim DNC chair Donna Brazile (who recently took over for disgraced former chair Debbie Wasserman Schultz) has offered no defense against charges that she supplied debate questions to Clinton in advance except “I can see Russia from my house!”

Putin’s tentative alliance with Iran and his support for Syrian president Bashar al-Assad have no doubt complicated the prospects for peace in Syria and worsened the humanitarian disaster. But it’s not Putin’s fault that American policy in the Middle East has been both incoherent and belligerent for decades, lurching from one blunder to the next at immense expenditure of blood and money. I know at least one left-wing journalist who has stopped himself several times from observing in public that at least Trump’s proposed realpolitik approach to Syria makes sense and might lessen the suffering, whereas Clinton’s confrontational policies offer nothing but more killing, increasing tensions and a possible new Cold War with Russia.

To be clear, I never bought into this summer’s hottest liberal conspiracy theory, the one about how Putin and Trump (and maybe Assange too) had a secret plan to undermine democracy and destroy America. For one thing, the plan wasn’t much of a secret: The Russian president and the Republican nominee didn’t need to confer by way of Edward Snowden’s triple-encrypted email account or hold a private meeting in a Zurich bank vault to figure out that they were kindred spirits with interests in common. For another, that whole “OMG Trump’s in league with a furriner!” meme was simultaneously desperate, cynical and naive. Democrats briefly hoped Trump had finally said something that would destroy his street-cred with patriotic, red-blooded heartland Americans, and tried to gin up a level of outrage that was conspicuously fake. It didn’t help that Trump’s excuse — when he invited the Russians to hack Hillary Clinton, he was talking out of his ass, as per usual — was inherently much more plausible.

So that’s not it. What has made Putin’s Macavity-style machinations so ingenious is the fact that he hasn’t actually had to do anything in order to throw the entire American political system off balance. Or, to be more accurate, that we don’t know what Putin has or hasn’t done, and it doesn’t much matter — he’s got us terrified and hypnotized and hunting for Russkies under the bed, à la 1964.

Putin is behind the rise of Trump and the fall of Debbie Wasserman Schultz, or so we convince ourselves — and for the latter event, at least, we should be grateful. He’s behind the chaos in Syria and the FBI’s renewed investigation of Hillary’s emails. I have no idea whether Putin has Clinton’s missing emails, or whether there would be anything incriminating in them if he did. But every Democratic Party apparatchik lives in fear of that possibility. He’s behind all the moronic chatter about a “rigged election” — and is no doubt the guy rigging the election, however it turns out. He’s responsible for the pervasive and unpleasant odor emanating from the Clinton Foundation — and I guess that's largely true, since we might not have noticed it without his alleged intervention. Cubs and Indians fans — whichever one of your teams loses the World Series, you know who to blame.

I’m being facetious about most of that, or some of it. I’m not claiming that Putin is a great guy, or that his role in global politics is unproblematic. I’m definitely not doing that left-wing dance of, like, “At least he’s a counterweight to American war-mongering and imperialism.” But at the risk of repeating myself, the point is that even if Putin has tried to meddle in American politics, the mainstream media and the political establishment perceive him as a much bigger threat than he really is.

We have invested this man — who in reality is the semi-elected leader of a large and diverse nation struggling with major external and internal problems of its own — with a Mephistophelean level of power and significance he does not actually possess. Whatever Putin’s limitations as a leader and thinker may be, his years of observing America from afar have given him keen insight into our most vulnerable spots. “The opportunist in Putin spotted the weaknesses within the U.S. political system this election and seized the moment with glee,” as Mark Galeotti put it in a Foreign Policy article this week. Putin has trolled us masterfully throughout this election cycle, and just reaped his reward by calling us a banana republic in front of the whole world: “America is a great power. If I’m wrong, correct me.” Pwned!

We can’t say we weren’t warned about this in advance. When I first wrote about the long-distance, long-brewing bromance between Putin and Trump — more than a year ago, unbelievably enough — I waded my way through “Mr. Putin: Operative in the Kremlin,” a doorstop-sized tome by Brookings Institution scholars Fiona Hill and Clifford W. Gaddy that is viewed as the authoritative English-language study of the Russian leader. (Hillary Clinton has almost certainly read that book. I won’t insult your intelligence by wondering whether Donald Trump has read it.) In their account, as I wrote at the time, Putin resembles “a character out of a postmodern, metafictional work by Don DeLillo or Philip K. Dick, about whom so little is certain that the reader begins to suspect he does not exist.”

There are few biographical details about Putin in their book, Hill and Gaddy write, because so little reliable information is available. “Attempting to write about Vladimir Putin,” they observe, amounts to “playing a game with Putin. It is a game where he is in charge. He controls the facts and the ‘stories.’ … We are dealing with someone who is a master at manipulating information, suppressing information, and creating pseudo-information.”

One possible consequence of the colorful and influential account in “Mr. Putin,” of course, is that the Russian president is widely perceived as much more of a Macavity-style mastermind than he really is. Galeotti’s article in Foreign Policy argues, for example, that Putin is dumber and more self-destructive than people think, and that his "chaos strategy" will eventually bite him in the ass. Putin's undoubted short-term tactical brilliance is likely to backfire on him in strategic terms, Galeotti contends, and “a few months of schadenfreude during the U.S. presidential campaign” will not be worth the harsh payback he faces with Hillary Clinton in the White House. Both things can be true, in a sense: When we say that Vladimir Putin has undermined American democracy, what we really mean is that we did it to ourselves and now we need someone to blame.