Donald Trump and the "twin insurgency": He's half plutocrat, half criminal and entirely ruthless 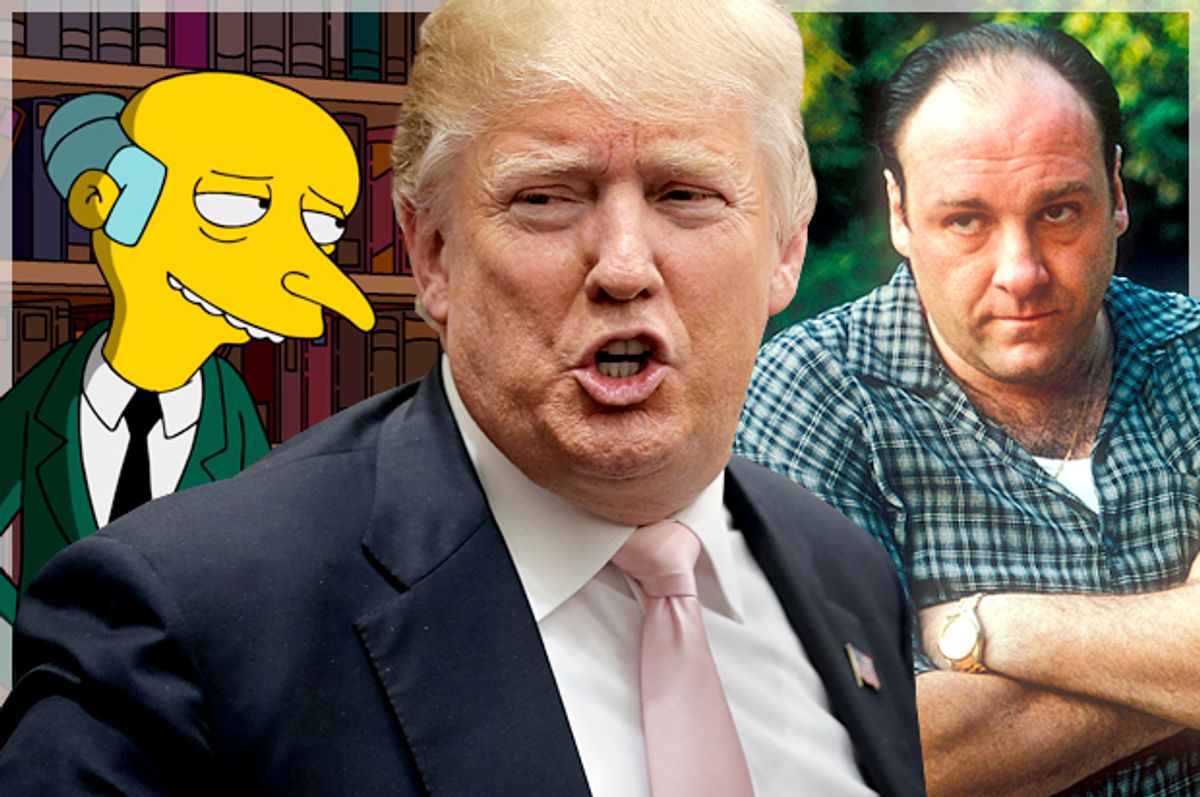 As the Donald Trump campaign implodes into the black hole of his damaged psyche, it’s important not to lose sight of the bigger picture, because it’s not simply going to vanish along with Trump’s chances of winning the presidency. Perhaps one of the most helpful ways of framing that big picture can be found in "The Twin Insurgency," a 2014 article by Nils Gilman in The American Interest, with the subhead "The postmodern state is under siege from plutocrats and criminals who unknowingly compound each other’s insidiousness."

As Gilman argues, during the post-World War II “social modernist era,” between 1945 and 1971, states around the world sought “to legitimate themselves by serving the interests of middle classes whose size they sought to expand.” Gilman doesn’t dwell on their relative successes — which were considerable in the industrialized West, at least — but concerns himself with what began happening as they fell short of their intended goals.

“Stagflation” in the West, central planning failure in the East and debt crisis in the global South were hallmarks of the different ways in which the model fell short. "By 1980, the reaction against the social modernist state had set in. Levels of economic inequality began to grow again, eventually reaching heights not seen since the 1920s," Gilman writes. "It wasn’t just that the state 'retreated' from the ‘commanding heights’ of the economy, to use Daniel Yergin’s terms, but also that the very ambition of the state receded. Many states stopped even pretending they wanted to create a more egalitarian society and instead sought to legitimate themselves by claiming they were maximizing individual opportunity."

From above, middle classes find themselves threatened by a global financial elite, in league with ultra-wealthy compradors, both of whom seek to cut social services and the taxes that pay for them — taxes that these elites depict as a form of illegitimate expropriation. From below, the middle classes find themselves exposed to a new resurgence of criminality, which has discovered in their plight a business opportunity.

That is the twin insurgency in a nutshell: predatory plutocratic elites above, criminal insurgencies below and an increasingly insecure immiserated middle class caught in between. And it helps us to understand Donald Trump’s emergence with a clarity that’s otherwise hard to muster.

On one hand, the erosion of the social modernist state that allows the twin insurgency to flourish is the very foundation of Trump’s appeal. He is responding to legitimate, intensely felt grievances that have also fed ethno-nationalist movements elsewhere around the world, although it was Bernie Sanders, not Trump, who offered a concrete political program this year to restore at least some of what’s been lost. “Trump is certainly feeding off the middle-class anxiety that the twin insurgency has produced,” Gilman confirmed in an email to Salon.

On the other hand, Trump is the very embodiment of the twin insurgency, an insurgent plutocrat with suggestive links to criminality, who takes full advantage of areas free from the rule of law. He has long ruthlessly targeted other insurgents when it suited him — first as exploited business partners (even his bankers!) and now as designated villains in his grab for presidential power, which he understands in purely insurgent rather than constitutional terms.

Wayne Barrett, Trump’s first biographer, is especially helpful here. In one Democracy Now! interview, Barrett described how, around 1990, Trump "was engaged in completely defrauding the banks, and the banks knew it. OK? And they were giving him the loans anyway.” In part, Barrett said, this was because of Trump's ties with prosecutors, most notably Rudy Giuliani, whose future trajectory is well known. “So his relationships with prosecutors and the fact that the bankers — they were embarrassed by what they had done; they didn’t want any investigation of this. So the combination of the two ... gave him a pass.” Trump wasn’t simply taking advantage of a corrupt system, he was personally corrupting it. He partnered with mobsters as well (more from Barrett on this below), though now he enjoys painting immigrants as gang members and criminals.

Gilman cited this willingness to attack other insurgents as one of Trump’s greatest sources of strength:

I think the paradox with him, in terms of my framework, is that he's the only candidate who has been willing to name and denounce both ends of the twin insurgency explicitly, whether that means railing against the "criminals from Mexico" and in the "inner cities," on the one hand, and the bankers and "globalist parasites" exporting jobs, on the other. To be honest, it disturbs me that he is the only candidate willing to speak this truth, and I think part of his appeal is precisely that he does so. All of it is inflected through extremely ugly racist shit, of course, so it's not that his diagnosis is right, but at least he's naming the relevant elephants.

Trump has always been willing to cozy up to or attack other members of either insurgency by turns — the bankers who’ve saved his ass more than once, or the criminal enterprise-builders with whom he has partnered. There’s nothing new in this, except what he’s trying to get out of it.

Trump has sometimes acted like a pure plutocratic insurgent. The New York Times account of how he benefited from $885 million in tax breaks and subsidies offers a classic example of how plutocrats extract wealth from the postmodern state. But his dealings with mob figures since the 1970s, and his repeated backstabbing and double-crossing (a.k.a. “renegotiation”) are unusual, to say the least. He also has business dealings around the globe, including countless hidden partnerships with other members of the global plutocracy. Thus, Trump is not your typical plutocrat. He represents a fascinating intersection of the two insurgencies in a number of different ways, and has exploited bureaucratic weaknesses both have helped create.

Consider Trump’s exploitative business record, just for a start. Trump has made untold millions by defaulting on contracts with contractors and workers, taking advantage of erosions of the rule of law and of the social cohesion associated with it. This has been aided and abetted by the use and abuse of legal proceedings, such as burying less affluent adversaries in frivolous paperwork, and aggressively using nondisclosure agreements to shut people up as a condition of settling with them. He’s been involved in 3,500 lawsuits, but apparently thinks that’s a good thing, since he claims to have won more often than lost.

That’s more a sign of how much legal muscle Trump has than anything else — a lesson he first learned from his mentor, Roy Cohn, once Sen. Joe McCarthy’s top aide. Cohn was also chief counsel to the New York mob, providing Trump with a wealth of criminal connections from the earliest days of his business career. Barrett discussed this in detail with Democracy Now! host Amy Goodman early in July. New York mobsters were involved with Trump’s projects in earlier years and were among his tenants. Even more crucially, the Philadelphia mob was involved, Barrett says, in an “intricate relationship that gave birth to Donald’s casino empire in Atlantic City."

Trump’s move from casinos into beauty pageants and eventually to hosting “The Apprentice” was facilitated by another example of his predatory nature, described in a Boston Globe story that dealt with just one of those 3,500 lawsuits:

It began as a planned partnership between Trump and a Florida couple, George Houraney and Jill Harth, who operated American Dream Calendar Girls, staging elaborate events in which winning contestants were featured, provocatively posed, in wall calendars.

Houraney and Harth were eager to tap into the cachet and glitz of Trump and his casinos. It ended in a bitter, drawn-out legal battle when the planned partnership crumbled after the first pageant.

The couple alleged Trump broke his word, cheated them out of a $250,000 fee, and deprived them of up to $5 million in future business. More explosively, they said he continually made aggressive, unwanted sexual advances toward Harth, who was vice president of American Dream.

Regarded in isolation — or worse yet, in pieces: a business dispute here, a sexual harassment claim there — it’s hard to appreciate the full significance of this story, although the Globe did underscore its significance for Trump’s business trajectory, after first noting it revealed a darker side of Trump’s playboy image at the time:

The foray into the Calendar Girls pageant, however, also ushered in Trump’s interest in the business of entertainment. He later bought the Miss Universe pageant and gained national renown for his reality show, “The Apprentice.”

“I don’t believe there would have been an ‘Apprentice’ if there wasn’t a pageant first,” said Jim Gibson, a consultant and longtime pageant host who guided Trump into the pageant business and eventually to the Miss Universe event. “That got him in the higher hierarchies of the television business. And it did exactly what Donald wanted to do: It built his name.”

None of the ventures named here were criminal, but Trump’s sexual behavior around them may well have been. And then there’s Trump’s modeling agency, which violated immigration laws, supplied models for “The Apprentice” and had contracts and work arrangements that have been described as bordering on human trafficking.

Trump has apparently never come close to facing criminal charges for any of his alleged misdeeds, but in a way that’s the point: The twin insurgency is very much about rolling back the rule of law, and Trump has had a field day exploiting the opportunities that result from that.

He's also had a vast number of foreign partnerships, which as Newsweek’s Kurt Eichenwald has reported, create irresolvable conflicts of interest for a potential president, conflicts that epitomize where Trump’s real interests lie as a member of the plutocratic insurgency. But there’s a further danger of foreign criminal involvements as well, which could at least partially be exposed if his tax returns were made public.

Gilman’s perspective illuminates the patterns of Trump’s dealings in a different way than is commonly understood, but it also goes far beyond an indictment of Trump as an individual. It was above all the conventional conservatives, starting with Reagan and Thatcher, who opened the way for the twin insurgencies to flourish. And then it was neoliberals like Bill Clinton and Tony Blair who “pragmatically” “reinvented” their center-left political parties to go along with it.

Today, figures like Bernie Sanders or British Labour Party leader Jeremy Corbyn represent an unexpected counterrevolution aimed at reclaiming a more robust vision of a modern state committed to the welfare of an expanding middle class. It remains to be seen whether their movements can reorient those parties, and the societies around them. The picture Gilman paints is not a promising one, but history has a tendency to change direction unexpectedly, and we could well see that happen again.

As for Trump, Gilman concludes, “I don't think he's really a plutocratic insurgent himself. Maybe he used to be, though even in the past he was more of a crony capitalist than a plutocratic insurgent.” That sounds like a barroom argument for another day. “Now he's evolving into something more like a would-be oligarch or warlord,” Gilman says.

In his article, Gilman discussed warlords as typical wielders of power in the more precarious “enclaves of criminal insurgents,” alongside more familiar kinds of gangsters or organized crime leaders. Which leads me to propose another way of thinking about Donald Trump: as a criminal conspirator. Lock him up!