The truth about gentrifying the gayborhood: Forcing LGBT people out of their communities makes cities less safe 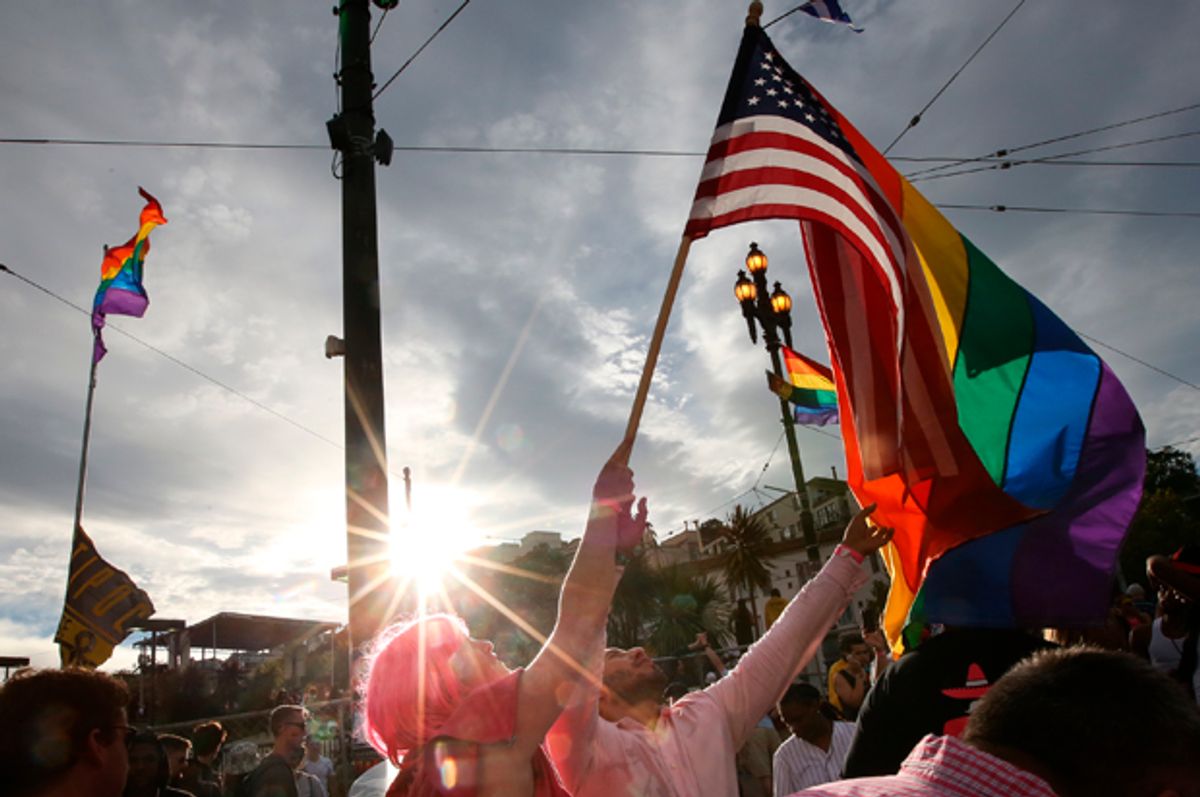 Halloween weekend is one of the biggest days of the year for gay nightlife — with holiday revelers swarming crowded bars in search of pumpkin-themed drink specials, the perfect dance mix and a tanned hunk in a barely there “Sexy Mummy” costume. But Fifteen, one of Raleigh’s most popular gay bars, celebrated All Hallow’s Eve in much spookier fashion: On Oct. 28, the nightspot announced on Facebook that it would be closing, effective immediately. The club’s sudden closure leaves just two full-time gay bars in the North Carolina capital: Legends Nightclub and Flex Nightclub.

Fifteen, which opened in 2014, had become the target of a slew of complaints in recent months from The Dawson, a condo across the street. Residents of the complex flooded the 2-year-old establishment with citations for noise and littering, making it difficult for the bar to stay open. Fifteen scrapped its DJ program to appease its neighbors, even lowering the club’s music to the minimum possible level. That didn’t stop the complaints.

Jay Wellons, the bar’s owner, believes that the condo’s actions were politically motivated. “With the election year, HB 2, and all of that, people are really showing their ass this year,” he told the Raleigh Agenda. “I would not be surprised if that’s involved.”

Wellons is referencing House Bill 2, the anti-LGBT bill that was swiftly pushed through the North Carolina legislature in March. The law, which was introduced, debated and signed into law in a single day, mandated that transgender residents use the public restroom that most closely corresponds with their gender identity. In addition, HB 2 prevents local legislatures from enacting their own nondiscrimination protections to shield LGBT residents from harm. The state’s governor, Pat McCrory, continues to defend the law in the face of widespread boycotts against it.

Since the bill’s passage, reports of hate crimes have been on the rise in the Tar Heel State. In June, a lesbian chef was attacked on her way home from work by a group of teenagers, while numerous trans people have been assaulted just for using the bathroom.

Despite the rise in anti-gay hate in North Carolina, the culprit likely isn’t the far-right uprising that has given people like Donald Trump a national platform. Instead, bars like Fifteen continue to be threatened by the seemingly mundane forces of gentrification, which continue to force gay populations out of neighborhoods they’ve called home for decades. Gentrification is often viewed as passive, just the free hand of the market exercising its right to shift the demographics of a city, but the truth is far more pernicious. Flex is just one of many examples of gay culture being driven out by an active culture clash, which threatens not only homes but lives.

Many of America’s most historically gay neighborhoods don’t seem all that queer anymore. Since San Francisco became an LGBT mecca in 1960s, over 160 gay bars have shuttered in the city, including the businesses that once lined the Castro district. As the Bay Area became a playground for wealthy Silicon Valley employees who have flocked to the city following the recent tech boom, clubs like the Deco Lounge, Club 8, Marlena’s and Esta Noche went under. Lex, the city’s last remaining lesbian bar, closed in 2014.

Although Slate’s June Thomas estimates that 86 active gay bars operated during the height of the club scene in 1970s New York, today there are about 40. This is despite the fact that the city’s population continues to skyrocket, having added 375,000 residents over the past five years. That figure is larger than the entire population of Cincinnati.

In Manhattan’s Chelsea neighborhood, its disappearing gay culture is largely a product of the neighborhood’s former bar patrons aging out of the club scene and settling down. Chelsea is one of the most densely populated gay enclaves in the country, home to a rowdy nightlife with bars like Boxers and Gym. Same-sex parents, however, complained to The New York Times in 2014 about the “example” that gay storefronts along Eighth Avenue, laden with the naked torsos of chiseled mannequins and advertisements for peep shows, are sending to youth.

“I’m pretty liberal, but I’m conservative when it comes to raising children,” said resident Scott McCormick. “There are several schools in the neighborhood — every day we’re walking past these stores 10 times.”

The Eagle is the only leather bar remaining in the neighborhood after others were forced out by rising rents, including bars like Rawhide, The Lure and The Spike. The popular gay bar chain, which was converted into a leather club in 1970, is a perfect symbol of gentrification in Chelsea, surrounded by the luxury condos and high-rises that have pushed out other similar bars. The Eagle sits adjacent from the Soori High Line and 520 W. 28th Street, the latter of which was constructed by renowned architect Zaha Hadid. Promising a “distinctly curated lifestyle,” a condo at 520 W. 28th Street will set you back at least $6 million.

The rise in luxury apartments can have devastating impacts on historically gay neighborhoods, which are already vulnerable to economic fluctuations. LGBT people are more likely to be impoverished than their straight counterparts, especially women and transgender people. In 2010, UCLA’s Williams Institute estimated the rate of poverty among lesbians to be 22.7 percent, while trans people are four times more likely than other Americans to live below the poverty line. When prices go up, bar owners have no choice but to look elsewhere or wind up on the street.

Lila Thirkield, the owner of Lex, claimed that displacement has a huge impact on gay bars. “When a business caters to about 5 percent of the population,” she wrote on Facebook, “it has tremendous impact when 1 percent of them leave. When 3 or 4 percent of them can no longer afford to live in the neighborhood, or the city, it makes the business model unsustainable.”

In the case of Seattle’s Capitol Hill, though, what is driving out the area’s LGBT population is not just price increases but the populations that rising rents have brought with them, many of whom are less than comfortable with the community's gay history. Hate crimes have been on the rise in what was once known as a safe haven for the city’s queer community. In 2015, the number of reported bias attacks against LGBT folks doubled from the previous year. Despite the community’s modest size, there were 72 anti-gay hate crimes last year, larger than for any other group.

During this year’s Pride celebration, a gay man was attacked after leaving The Cuff Complex, a local fetish bar, and knocked unconscious. Adé Cônnére, a drag performer, had just finished a show in 2014 when he was assaulted by two men, who, believing he was a woman, tried to pick him up. The same year, an arsonist lit up Neighbours Nightclub, causing $350 in damage. Although no one was hurt, this was the second time in as many years that the bar was set ablaze.

The neighborhood’s feelings about its new inhabitants can be best summed up by an anti-gentrification slogan from multimedia artist John Cristello. The phrase “We Came Here to Get Away From You” has been posted to mailboxes, lightposts and electrical boxes in the neighborhood.

This problem isn’t unique to Seattle. Cities like New York and Washington have experienced upticks in anti-LGBT attacks as gay populations clash with new residents. In 2015, 70 hate crimes were reported in the nation’s capital, which boasts a rate of transphobic violence that's 10 times the national average. In 2013 a spate of murders in New York City brought hate crimes into the spotlight and made national headlines. Elliot Morales, 36, shot 32-year-old Mark Carson in the face following an altercation in the West Village. It was one of several such attacks over a violent summer.

One solution that some have proposed to the scourge of gentrification, as well as its harmful side effects, is commercial rent control. This would give business owners leverage with landlords to negotiate price increases when the value of a property goes up, such as following the influx of tech workers with a great deal of disposable income. Spain had such a system in place until 2014. In New York, a proposal that would do exactly that, known as the Small Business Jobs Survival Act, has been stalled in the state legislature for three decades.

Alicia Glen, the deputy mayor of New York, dismissed the legislation when it came up during a 2015 press conference. Although Glen claimed that she wants to maintain the city’s “cool, funky” legacy, she said, “There are some small businesses that are probably going to just fail because they’re not very good businesses.”

Giving LGBT-owned businesses greater bargaining power isn’t just a matter of nostalgia, as Glen suggested. For queer people who have flocked to major metropolitan areas seeking a respite from places where it was unsafe to come out and be proud as who they are, the communities they have helped build are the only ones they know. For some, a gay bar might just be a business and its closing just the way that gentrification works: Just as LGBT people flocked to low-income neighborhoods, they are later displaced by invading hordes. But for others, these bars offer a crucial lifeline — of which there are increasingly fewer with each passing year.