CNN is the new smoking

It's everywhere, it's inescapable and it's sickening 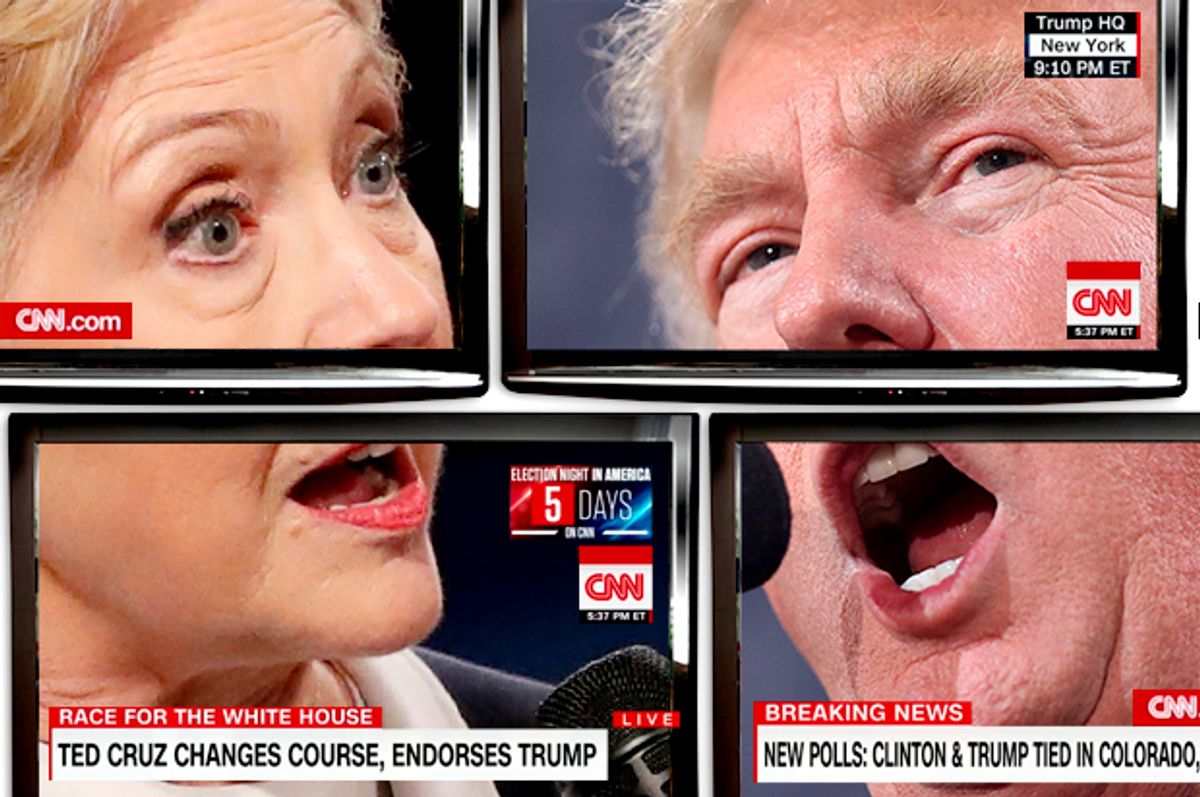 You don't realize how effectively you've been avoiding something until you're confronted with it. But now that I've spent the past two weeks being inundated with CNN, all I can say is, America, I don't know how you can stand it.

For a person who works in the media, I have a pretty small media footprint. My mental health demands it — minimizing my exposure keeps me from getting burned out and depressed. My sole news subscription is to The Washington Post, because I believe so strongly in supporting the incredible, investigative election-year journalism it has been doing.

I don't have cable television, and I carefully curate my social media. Now that Facebook's entered the fake news business, I've manually blocked a bunch of sites from my feed. And on Twitter, I've done the same to minimize the danger of hate-read retweets. I didn't watch the first presidential debate and only watched the second two because my middle schooler was required to for class, and I wanted to be supportive.

So I guess I didn't realize how effectively I'd been sheltering myself. But though I believed I really understood what has been happening over the past year, it turns out that I didn't appreciate the full weight of it until recently. And wow, did you know that Trump fella is the worst?

It started two weeks ago, when I went in to Memorial Sloan Kettering for a CT scan and MRI that's part of my post-cancer-treatment life. When I arrived there in a waiting room full of recovering and currently in treatment CANCER PATIENTS, Rudy Giuliani was on a television screen, shrieking like a hydra. The action then cut to a clip of Trump, standing in front of an enthusiastic crowd, sputtering angrily.

"Bill Clinton is much worse than Trump," the man in the chair next to me said, apparently to the TV. "If Hillary gets in, it's going to be four more years of Bill Clinton in the White House." I have had late-stage cancer; I suffer from migraines and claustrophobia, and I also happen to be a sentient female. You know what I really don't need right before toddling off for an MRI?  That guy. You know what's not helpful, to any of us just waiting for our medical tests and procedures? Rudy Giuliani.

In a waiting room, patients don't have the option of shoving in their noise-canceling earphones and cranking up a guided meditation because we have to be alert to when our names are called. Subjecting us to the toxic deluge vomiting forth from cable news is insensitive at best and just plain cruel at worst.The woman at the reception desk, when I asked if the TV could be turned off or even just changed to a different network, robotically said she'd ask and proceeded to do nothing.

Then last week I spent a few days in Atlanta. It's CNN's homeland, and the network is inescapable there. I was speaking at a conference for people in the cancer-treatment field — another population that more than deserves to not hear Donald Trump yelling around the clock. Yet from the moment my plane touched down, it was like walking into a poisoned fog.

At my Marriott hotel, there were televisions tuned to the news at the shuttle bus stop outside the facility, televisions blaring in the lobby and in the gym. There were individual televisions in the booths at the hotel restaurant and, of course, a bank of televisions above the restaurant's bar. I had arrived tired and hungry and in need of a snack and a glass of wine. By the time my order came, I mostly just needed the wine.

A few days later as I headed back home on Saturday, I was walking through the Atlanta airport. From every gate in my terminal, ergo every gate in the airport, the cable news network was blasting a Trump rally in Colorado. "Is she going to keep Huma [Abedin]?" Trump was asking crowd. "Huma's been a problem. Do we agree? Huma. Huma's been a problem. I wonder if Huma's going to stay there. And I hope they haven't given Huma immunity. Because it seemed like every person who walked down the sidewalk got immunity. I hope they didn't give Huma immunity because she knows the real story. She knows what's going on. She knows what's going on."

On and on, he rambled furiously. I felt my chest tighten. Here was this man, this powerful, angry man who treats women like garbage, yet again whipping a crowd into a frenzy by excoriating a female.

I went up to my gate agent, pointed to the television and said, "This is offensive." She leaned in and said, "I agree." I asked if there was anything to be done, and she told me, "Contact the airport management." For 25 years now, CNN has had a stranglehold in several dozen American airports, by the way, so feel free to contact yours if the network makes your travel experience more unpleasant, too.

When I'm in a restaurant or airport or gym or a waiting area, I don't have to endure the noxious fumes of cigarette smoke. That's great. Instead I just have to deal with the stench of advertiser-supported misogyny. This is not normal. This is not healthy. It's definitely not entertaining or a welcome distraction. It affects — whether we want it to or not — how we view the issues.

At this point in our history, it's also simply a bad thing to inflict on us. As Claire Landsbaum wrote for New York magazine on Wednesday, it's literally sickening. She quoted a Denver counselor who reported that female clients are talking about the election "every single day" and said, "For women who are not feeling safe to begin with, this can trigger serious feelings of insecurity and fear."

Melissa Lester Olson, a psychotherapist based in — wait for it — CNN's hub of Atlanta, likewise recently told Time that "Women whom I have seen for years are only now bringing up physical and sexual trauma from their past. I think this election is re-traumatizing them."

Speaking to Reuters last month, Lynn Bufka, executive director for practice research and policy at the American Psychological Association, advised, "Turn off the news feed. Stop reading everything if it just gets you more stressed." Nice if you can, but that's increasingly impossible in our public spaces. The chatter that, in less off-the-rails years was mere annoying background noise, has in 2016 become a genuinely upsetting barrage of wall-to-wall misinformation, dangerous propaganda and straight-up screaming.

Almost as unsettling as the news itself is the horrible, relentless manner in which it's forced on us, wherever we go. And how are we supposed to just turn off the news when we don't even have the remote?