Slackdown! Slack rudely spanks Microsoft as the battle for workplace communication heats up 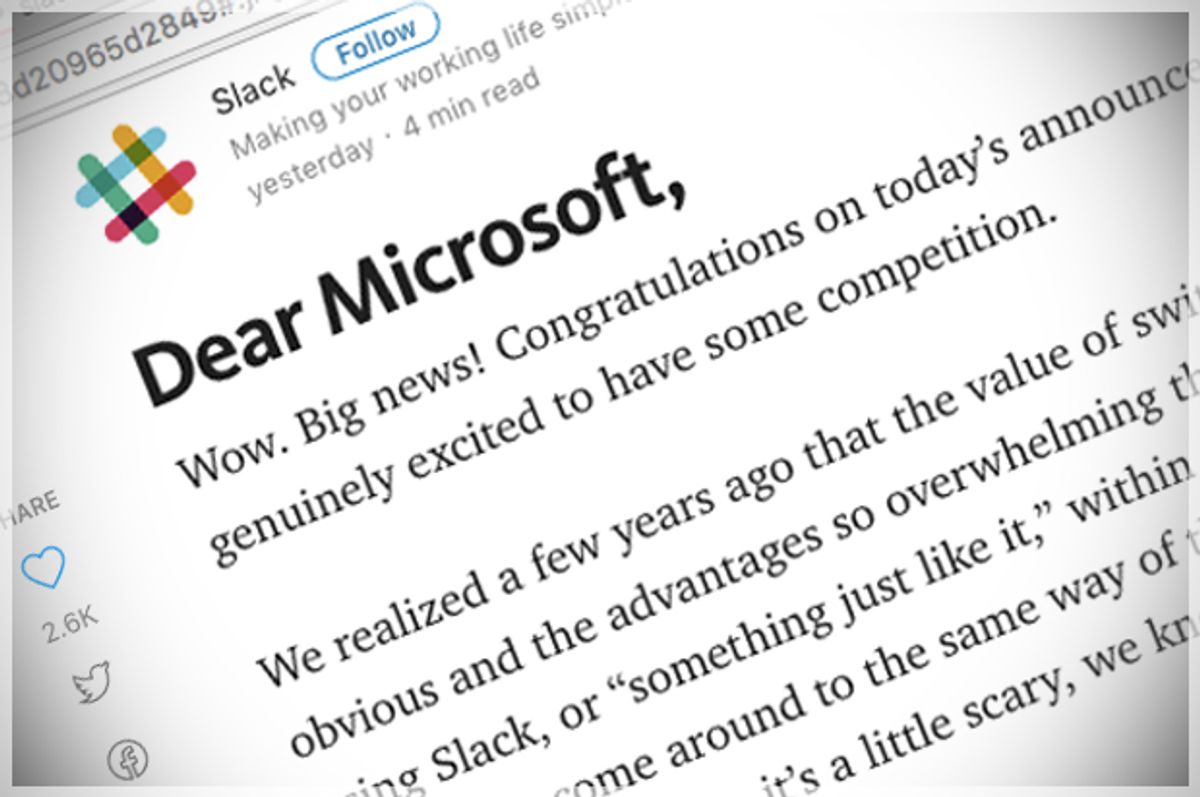 On the same day that Microsoft announced it would launch a team-based collaboration tool to compete with Slack, the messaging app's maker released a full page ad in The New York Times that was a bit, shall we say, passive aggressive.

"Wow. Big news! Congratulations on today’s announcements. We’re genuinely excited to have some competition," the ad began. After going on to claim that they predicted "every business would be using Slack, or 'something just like it,' within the decade," the ad went on to tell Microsoft that "all this is harder than it looks" and that "we want to give you some friendly advice."

The advice included remembering that "first, and most importantly, it's not the features that matter" but "a degree of thoughtfulness and craftsmanship that is not common in the development of enterprise software." The letter discussed the importance of communication ("we've spent tens of thousands of hours talking to customers and adapting Slack to find the grooves that match all those human quirks"), internal transparency, having an open platform ("that’s why we work so hard to find elegant and creative ways to weave third-party software workflows right into Slack"), and remembering that "you've got to do this with love."

The note ended by adding "One final point: Slack is here to stay. We are where work happens for millions of people around the world." It acknowledged that Microsoft is a "worthy competitor" and conceded "we're sure you’re going to come up with a couple of new ideas on your own too. And we’ll be right there, ready. — Your friends at Slack"

Slack's letter is reminiscent of the "Seriously" ad that Apple placed in The Wall Street Journal in August 1981 which similarly "welcomed" IBM after it released its first personal computer.

"Welcome, IBM. Seriously." Apple's ad famously declared in big bold letters. It added that "we look forward to responsible competition in the massive effort to distribute this American technology to the world. And we appreciate the magnitude of your commitment. Because what we are doing is increasing social capital by enhancing individual productivity. Welcome to the task."

Time will tell if Slack's passive-aggressive challenge-welcome to Microsoft will rank alongside Apple's comparable gesture to IBM from thirty-five years earlier. And much will depend on who wins the messaging wars.