Willem Dafoe and director Paul Schrader are at it again. This time it's murder and mayhem all 'round 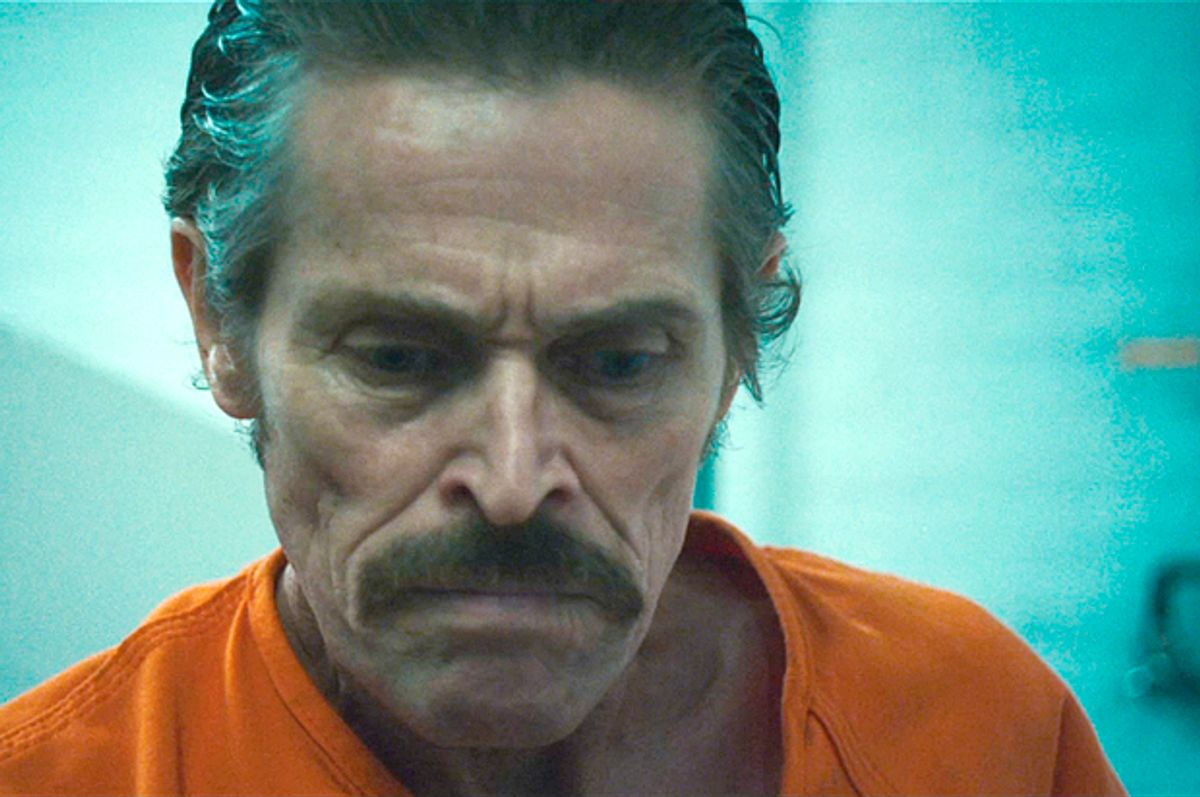 Willem Dafoe out-crazies Nicolas Cage in “Dog Eat Dog,” a trippy new crime film directed by Paul Schrader. The pre-credit sequence is spectacularly lurid as the aptly named Mad Dog (Dafoe) snorts coke off his blood-soaked hands having just… well, how he gets to that point is best left for adventurous viewers to discover.

The plot has ex-con Mad Dog reuniting with fellow criminals Troy (Cage), who has just been released from jail, and Diesel (Christopher Matthew Cook). They plan to kidnap a baby from a Cleveland gangster, posing as cops to commit the crime. Of course, there are hitches, as well as visits to strip clubs and casinos and sojourns with prostitutes. But Mad Dog does take time to wax philosophical with Diesel about redemption — even if they are disposing of dead bodies at the time. Yup, it’s that kind of film.

Re-teaming with Schrader, who first directed him as a drug dealer in “Light Sleeper,” Dafoe goes gleefully over the top here. His wild, nervy performance consists of desperate rants about being damaged infused with offbeat moments of humor. It is an arresting turn from one of the great character actors.

Dafoe, who broke out as a counterfeiter in the great 1985 crime film “To Live and Die in L.A.,” and has since played characters on both sides of the law, talked about becoming Mad Dog, what pushes his buttons, and why he won’t get tattooed.

The opening sequence of “Dog Eat Dog” is one of the wildest things I’ve seen all year. Can you talk about shooting such a depraved sequence?

All the actions are strong, and the way of shooting was very strange. That’s the kind of situation you want to be in. You have a lot to work with there.

Mad Dog is fucked up and drugged up, but he wants to find respect for himself and be a better person. How do you find the good — or even the relatable — in such a sociopath?

I think the way I relate to it is as a fantasy thing. This is our shadow side. Mad Dog is high all the time. He’s totally alienated, and that alienation is pushed really far and it results in brutal behavior. But you have other scenes where you see how life is for him — he missed the boat. He feels a lack of love, and wants to be forgiven and respected. All the things he needs he gets when he acts out. He’s a horrible figure, but also a tragic figure.

You have played to extremes in the past — “Antichrist” comes first to mind. What appeals to you about going all out in a performance?

I don’t think about extreme characters or “going all out.” I find things that engage me and that I can disappear into. I try to give the characters their day in court. They are full of contradictions and questions. I’m not selling anything, but I like to make things that have resonance.

Do you want to talk about the scene where you, Nic Cage and Chris Cook squirt each other with ketchup and mustard while shirtless in a hotel room? What was that all about?

That’s party time! [Laughs] We needed an energy at that moment. It was an intermission in the action. We see these boys letting their hair down. It was weird. We shot it very quick and manic to get into the head of people desperate to celebrate. It was the shadow side of pathetic.

I love how angry Mad Dog gets when people push his buttons. What pushes your buttons? You don’t seem to be someone I’d want to make angry.

Just like Mad Dog, if I don’t get enough love and respect! [Laughs maniacally] I’m joking. That’s a personal question. I wouldn’t tell you even if I knew. If I knew, people wouldn't be able to push my buttons. If people know what your buttons are, you hide those buttons. People push you because they know where your buttons are.

Mad Dog also talks about the theme of redemption and asks Diesel if he thinks people can change. This is a key theme of Schrader’s films. What are your thoughts on the subject of redemption?

That’s a big one. In black comedy, that’s not going to happen. These characters have gone too far, but it is an aspiration.

You have played characters on both sides of the law since your breakout performance in “To Live and Die in L.A,” from a hateful guard in John Waters’ “Cry-Baby,” to a detective in “The Boondock Saints” and a criminal in “Dog Eat Dog.”

I’m attracted less to playing the guy who has to deal with the man. I like playing people in the margins. The main story that society tries to project — I don’t want to prop that up. I want to challenge that. The way to do that is to take different perspectives. Just because a guy is on one side of the law, he doesn’t show his entire morality. I’m playing a character; I’m not selling anything, I’m not making propaganda, I’m trying to make something that feels true and engages us.

Have you ever had any trouble with the law?

Not really. I’ve never been in jail. I’m a God-fearing boy from Wisconsin.

You are a character actor who often gets lead roles, or you steal scenes in supporting roles. You alternate Lars von Trier films with “Spiderman.” What are your criteria for taking a role like Mad Dog?

It’s whether it calls you. You look at the character and what he does, and you think: Do I want to do these things and put myself in that place? It’s intuitive.

I like the fact that Mad Dog is so brutal, but he is needy. It’s a weird combination. It struck me as true. It all gets confused because you get abnormal behavior through his drug use. He’s high ten different ways. You’re not dealing realistically. He’s way out there and trying to get back — and that’s an interesting problem. He’s extreme, but a lot of people struggle with dissatisfaction, and they want to get back and be whole again. He’s one of those characters.

I loved his little chin tattoo. Do you have any tattoos?

No. I’m an actor. I don’t want to be marked up. I need to be flexible. I don’t want to decide who I am, I want to wash up dead on a community beach and have folks not know who I am. Tattoos tend to memorialize a moment, and your body is still changing. You’re trying to freeze time, which creates problems for people.

What can you say about working again with Paul Schrader?

Paul and I have a shorthand. I know what he needs from me, and he knows what I need from him. You don’t have to establish a trust. You can go deep because you feel safe. I like his cool approach to very hot subjects. One thing about Paul is that when we were halfway through making “Light Sleeper,” I thought: He doesn’t speak too much to the actors. And then he came over and said, “You’re doing fine.” He gives you a good setup and gives you room to do your thing. But the crazy thing is: I don’t have a thing!