Lucy Kalanithi: "Suffering is not a special experience, and that's comforting" 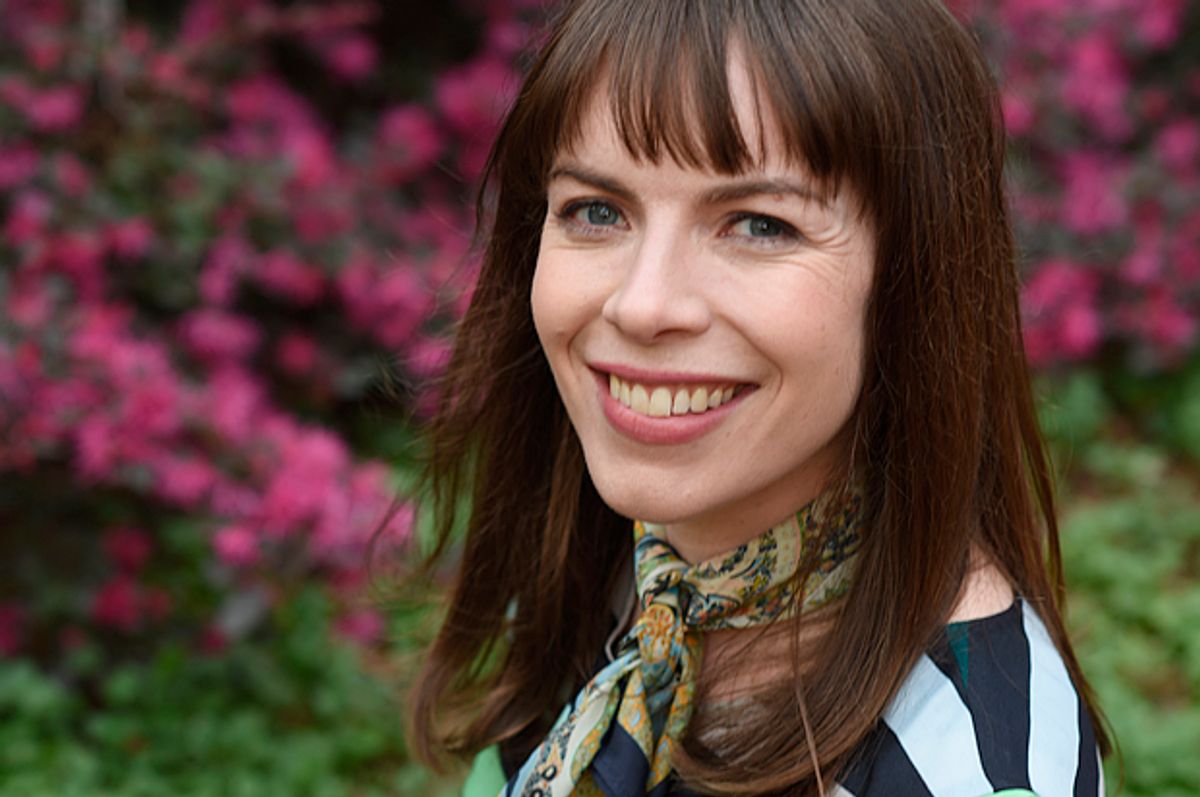 It must be difficult to be known in professional circles as, among other things, a widow. Yet Lucy Kalanithi, a clinical assistant professor of medicine at Stanford, has embraced that distinction ever since her husband Paul Kalanithi shared the story of his mortality-facing experience of lung cancer in the beautiful memoir "When Breath Becomes Air." It was Lucy who finished the book and has been sharing their story of love and grief and acceptance ever since.

Kalanithi, who earlier this week appeared at the San Francisco Zen Center in a conversation on "Sickness, Old Age, and Death," spoke to Salon via phone recently on love and loss.

I think we're in a very small club of people who know what it's like to write a book while you're running out of time. I had Stage 4 cancer and got in a clinical trial and was pronounced disease free in three months. But then I got my book deal almost simultaneously with one of my best friends finding out that there was nothing more the doctors could do for her. I know that feeling of wanting to get it all down and get it right and honor the memory and tell someone's story.

So I was speaking at an event this weekend and the first question someone asked was "What good experiences and happy memories do you have from that time of your life?" I thought it was an awesome thing to ask because it starts from a place of understanding that there are happy memories.

It's everything at once. And suffering is not a special experience. It's very very personal and very very universal, and that has been comforting to me.

When you can be present for it, there are so many beautiful payoffs. It's not a place you ever want to go, but if you can go, go into it with your eyes open.

It makes you better able to tolerate the actual suffering part, too.

So what has happened for you over this past year of talking about gratitude and acceptance and pain?

There's the personal version and connecting to people over those experiences and conversations. That's a really unexpected piece of it. I never thought I would be part of sharing something really personal. Especially as a physician, we're supposed to be perfect and present this sort of unblemished self, within the profession and publicly.

That's changing a little bit. Physicians are starting to talk in a real way about our own experiences. There's not as much this idea of detached concern or paternalism. I think the culture of medicine and health care is changing in really good ways. I almost feel part of that as part of what I'm doing. The same taboos that are outside the hospital are inside the hospital, too. Doctors are just as uncomfortable as anybody with death, if not more. Surprising but true.

And we as patients have been very well trained in avoiding our own pain and suffering. We go the doctors hoping they'll say good things. Doctors don't want to give us bad news, and we don't want to hear it.

I'm giving a talk on TEDMed next month and that's part of it. I think that's so important. I get a lot of calls and emails from people with lung cancer. They call me when they first get diagnosed asking, "Who is the best doctor and what should I be doing and thinking about?" I've found they also call me when they know they're dying. They're like, "How do I navigate this?" There's no obvious blueprint. It's not part of our lexicon.

It makes you realize how much it's needed. What has changed for you in your perspective since you crossed over to this side of the experience?

Some of it has changed and some of it is exactly the same. Being physicians prepared us really well for Paul's illness because we didn't feel angry. He had just seen it so many times, especially when you're a neurosurgeon. The reason you have a job is because people have brain tumors and hemorrhagic strokes and giant car accidents. He was seeing young people dying all the time.

For me, I'm a general internist, so I was practicing primary care for a lot of that time and then doing a fellowship at Stanford thinking about health care value. So I had multiple patients who were terminally ill, whether it was neurologic disability or cancer or whatever. I had had a lot of those conversations.

I worked on a project about stroke, but thought a lot about health care costs. How we think end of life is one of the places in health care in which there's a need to lower costs. But I think there's also a moral case for doing it. Because if it's built to match people's care to their values, theres a really wonderful overlap between the way in which increased communication in health care improves value at every point.

Not to be prescriptive, but I think a lot of times people don't know their options or know how to think about quality over quantity.

I was comfortable witnessing suffering and trying to help people understand tradeoffs and help them understand sometimes you only have bad choices. How do you retain who you are during that period of hard choices? But it was of course reasonably abstract.

Sometimes Paul and I would swap stories or help each other try to manage our own emotions around it, but it was an unbelievably different experience to actually have to tolerate facing your own mortality and facing that grief and loss, that ever-present sadness. And then also the uncertainty is so painful, too.

Even if you know you're dying, there's the fact of not knowing. All the uncertainty is so hard to tolerate. It's a great time to be a cancer patient; the range of possibilities is so wide; and meanwhile, you're trying to figure out, Should we work? Should we have a baby?

It's like saying someone is going to stab you in the heart. How much can you really brace for that? The foreknowledge does not mitigate the pain when it happens. And then afterward, you have a new identity.

My own ability to tolerate discomfort was so deepened. You just have to, right? There's not anything you can do. Paul had to. I have this really great therapist who I had before Paul's illness. Thank God some of these earlier, much less difficult experiences prepared me somewhat for this time.

I remember during an earlier time, she wrote on her white board, this really Buddhist idea that "Pain plus nonacceptance of pain equals suffering." At the time I was like, I don't even understand, but I don't want to feel this! I don't accept it! Now it's like, oh yeah, of course I understand exactly what that means. I think softening to it made all the difference.

I feel sorry for the people in my life who couldn't do it — who backed away or were so insistent that "Everything's going to be OK!" It's so much harder to get to another place in the experience when you're denying what the experience is. I wonder what we can do to gently tell people that there's a better way to do it?

I think about this all the time. I also think about the ways in which that refusal has major implications on your health care. If it winds up being the "battle" metaphor and "fight, fight, fight," it can lead to increased physical suffering or even post-traumatic stress for family members and the patient. It can be quite extreme.

It's hard to help somebody navigate those decisions. I think a lot about how the ability to tolerate misfortune or push back against misfortune can really affect the practical decisions that you make in your life and either increase or soothe the suffering underneath it, particularly the amount of care. I don't know the answer. I watched Paul model it through writing, and just having the conversation. You're doing that, and I'm doing that.

It's easy to talk about it in the abstract. But I think actual people's stories are more powerful. To have somebody modeling it, so they're watching you and saying, "Why is she not more angry? Or why is she angry and accepting at the same time? Where does that acceptance come from?" I think sharing it seems to be really important.

I'm trying to normalize pain and grief and trauma in all its forms. My daughter went into septic shock and spent five days in the ICU earlier this year, and I was grateful that we had practice in our family in dealing with traumatic events. I don't have to rush to get my child back to feeling normal about life. I don't have to push her to feel something she doesn't feel yet.

The secret of being a grown-up is people die and marriage is hard and suffering is coming. It's helpful. I think if you approach it extremely authentically and fully, you get to be your full self.

Despite all of this, it was so disorientingly difficult, especially after Paul died. That was by far the worst part, which maybe seems obvious. I had this unbelievable tingling in my hands. My hands were on fire for months. Of course, I thought I had some terrible neurologic disease and I wouldn't be able to take care of [our daughter] Cady. You know, catastrophic thinking.

Then about a year after Paul died, it just cleared up, just stopped. That tingling didn't fit a particular nerve distribution. So objectively speaking from a medical perspective, everything was normal. It didn't add up. There were all these things it wasn't.

But at the same time, I couldn't believe it could just be grief. It was so surprising; it couldn't be just grief. Just grief, so to speak. In retrospect, I really, truly think it was. It's gone now. It's so interesting because at the same time I was thinking, I'm coping really well; I'm not doing anything destructive; my daughter is thriving; I feel like I'm able to tolerate this despite how painful it is. And meanwhile, my hands are falling off. It was still so, so unbelievable.

It reminds me of how I felt when I had my first child, like I couldn't believe every person on Earth got here because a woman had gone through what I just had done. It blew my mind.

You go through grief or suffering, and then in a weird way you do feel that deep, profound connection to the human story. I feel like I'm really part of the family.

And now, raising a child. You think, Oh, I want my child to be happy and sheltered from pain. No, I actually think you want your child to be resilient and feel that she has meaning in her life. But that's different from being happy. Or that's, I think, what happiness really is.