The Trump who stole Christmas: Win or lose, Donald Trump has ruined everything

Maybe Trump did us a solid by ripping open the rotting carcass of democracy, but our national nightmare isn't over 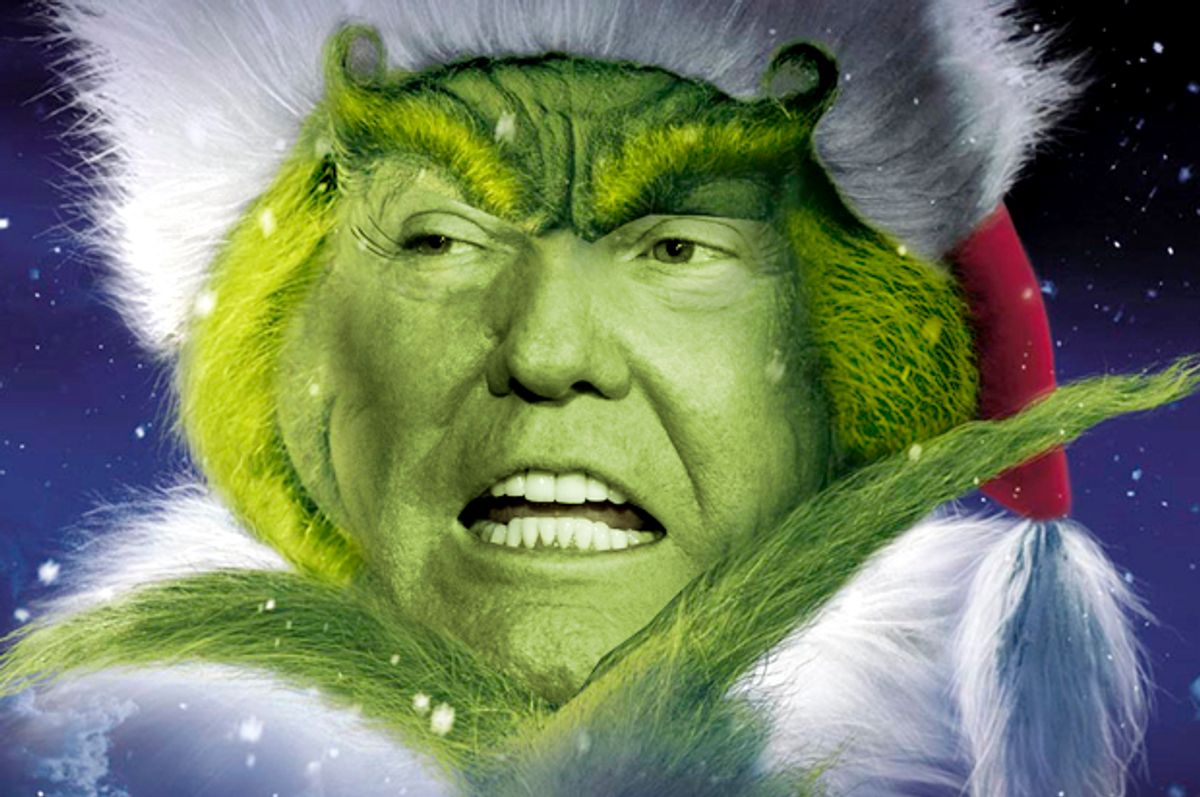 From the vantage point of November 2016, George Orwell’s famous image of the totalitarian future — “a boot stamping on a human face — forever” — bespeaks a certain failure of imagination. It’s not the violence of the image that seems wrong, exactly, as at long last we reach the finish line of the worst presidential campaign of American history. Women and Muslims and undocumented immigrants and African-Americans in urban neighborhoods have reason to fear a level of violence under President Donald Trump that will be more than metaphorical. But Orwell’s formulation is too naked, too unconcealed. It’s too clear. It has a clear subject and object: Someone is wearing that boot, and someone else’s face is being smashed. Nothing about our current dystopia possesses that level of specificity.

Trump is too canny to offer clear promises of jackboots and face-smashing. Those things are present only by implication, or in the joyous utterances of his less inhibited fans. When he’s not talking about having Hillary Clinton tried, convicted and imprisoned — not necessarily in that order — Trump’s rhetoric is overwhelmingly positive, as was Adolf Hitler’s. America will be great again; the border wall that will cost Americans nothing (and he’s right about that, because it will never be built) is always described as “beautiful.” He has also described the wall as “physical,” “impenetrable” and “powerful,” a puzzling collection of adjectives.

Trump seems to be telling his audiences several different things at once: The wall will exist in the real world (in other words, it’s not just an idea); it will be mighty and permanent, a thing that never changes in a world of change; and it will possess qualities not normally associated with walls -- the qualities of a living thing, a technological device or a weapon. What he’s really telling them, of course, is that the wall is an impossible fantasy, but it’s not clear whether even he understands that.

As media critic Jay Rosen told my Salon colleague Paul Rosenberg (in an interview that will be published later this weekend), Trump’s ascendancy was enabled by a cultural atmosphere of generalized confusion, murk and opacity.

If people look at events and they can't see any pattern — they look at the world and it doesn't make sense; they try to pay attention to politics but all is opaque — they're not going to participate. … An opaque society that remains opaque — opaque power-holders, opaque institutions — kills the desire for news at its root. Why would you need constant news reports if there's nothing to be understood? That's the way authoritarian societies work.

At various times in that conversation Rosen seems to channel Orwell, and at other times — as when he says that “an opaque society turns citizens into spectators” — he comes closer to French Situationist Guy Debord’s epigrammatic revolutionary tract “Society of the Spectacle.” Both are key points of reference in making sense of our current Trumpified predicament, although I know Rosen takes a more hopeful view of media and democracy than either of them. Or at least he used to; we have all been herded closer to the realms of darkness by the coming of the Orange Lord.

Orwell could not have envisioned a democratic or pseudo-democratic leader with Trump’s repulsive, clownish charisma — the Big Brother of “Nineteen Eighty-Four” is a bland, avuncular figurehead who probably does not exist. Every mass-murdering despot, from Hitler and Stalin to Augusto Pinochet and Idi Amin, has trained himself to affect a certain statesmanlike gravity when required. Trump simply can’t pull it off; he seems more like one of the Three Stooges, who has accidentally been mistaken for the mayor and is trying to control the stolen chicken in his pocket.

Orwell’s mistake was to assume that issues of personality and performance would be removed from politics, as they largely were in the Soviet Union. It took the cultural-studies tradition of Debord and Roland Barthes and the Frankfurt School, and the media-criticism tradition that goes from Walter Lippmann through Joan Didion to Jay Rosen, to observe that personality and performance had replaced politics.

Donald Trump is less like Big Brother than like the Grinch who stole Christmas. Indeed, if he is elected president on Tuesday — and don’t tell me you don’t feel that looming possibility pressing down on you, like the gravity of an over-oxygenated alien planet — the theft will be complete.

Those of us who assumed all along that it could not possibly come to this will be left looking foolish once again, standing there by the fireplace like little Cindy-Lou Who, who had the excuse of being not more than two. “Trumpy Claus, why,” we will ask in our small, sad, bicoastal-liberal voices, “Why are you taking our Christmas tree? WHY?” We already know the answer: Because we deserve it. Whether we will be capable of anything like Whoville’s Christmas spirit, with President-elect Trump waiting in the wings, is open to doubt.

Even if Hillary Clinton wins the election on Tuesday, and wins it clearly enough that Trump concedes defeat without launching a civil war, it’s not a safe bet that Christmas is coming after all. Indeed, Donald Trump is not really the problem in America. He’s just a really scary symbolic manifestation of the problem.

I’m not the world’s biggest fan of Clinton or anything, but consider how far we have fallen: We’re all preparing to get down on our knees and kiss the pavement in gratitude if a highly knowledgeable policy wonk, who was secretary of state and before that a United States senator, can squeak out a narrow victory over a mentally deficient TV celebrity with an obvious personality disorder whose campaign is based entirely on implausible lies and hateful fantasies.

Trump hypnotized the media and devoured the news cycle, as everyone has noticed by now but no one has found a way to prevent. It also feels at times as if Trump has devoured all language and all thought, or at least has exposed how meaningless those things have become. Ideas and words wither and die in the glare of Trumpitude. It is nearly time to replace all nouns and verbs with Trumpness: Trumping a 108-year Trump with a stirring Trump-back, the Chicago Trumps Trumped the Trump Series on Trumpday night. Or as poet Ted Hughes almost put it some years ago:

Trump’s virtual triumph, if it is not a literal triumph, represents the culmination and unification of the Orwellian and Debordian strands of dystopia. If Trump is no better than a ludicrous parody of great despots of the past, and if he embodies the decadent state of our republic in the dumbest possible fashion, that really doesn’t make things any better. On one hand there is the reduction of all political discourse to idiocy, and all political sentiment to hate. “The old civilizations claimed that they were founded on love and justice,” O’Brien the party apparatchik of “Nineteen Eighty-Four” tells Winston Smith. “Ours is founded upon hatred. In our world there will be no emotions except fear, rage, triumph, and self-abasement. Everything else we shall destroy.”

Trump is not capable of articulating such a complex thought, but he communicates much the same sentiment in a purer, less intellectual fashion. I wasn’t around for Andrew Jackson and neither were you, but in living American memory there has not been a presidential candidate so clearly lacking in terms normal emotional range and mental capacity. It would never occur to Trump to propose the elimination of art, literature, science, laughter and sexual pleasure, as O’Brien does. He might dimly apprehend that other rich people like those things, for unknown reasons. But he transparently has no interest in them, and they play no role in the soul-sucking void that is the Trumpian spiritual universe. (I know what you’re thinking — but nowhere in Trump’s extensive history of objectifying, fetishizing and abusing women can one discern erotic pleasure as such.)

On the other hand, we have the society envisioned by Debord, in which show business and market capitalism have merged to create a “Matrix”-style simulation that has effectively replaced both work and leisure time. A Marxist philosopher of the 1960s could scarcely have imagined a world in which people who stare at screens all day long in the office also stare at them deep into the night, as well as on the train or bus going to and from work. But such a world could not possibly illustrate his precepts more vividly, and Donald Trump is both its ultimate symbol and its perfect commodity.

One of Debord’s key ideas is that capitalism subjects people to the “violent expropriation of their time,” first as workers and but second and perhaps more importantly as consumers. Even if Trump’s presidential candidacy has been a troubling and disruptive commodity, not entirely congenial to those who manage the society of the spectacle, he has expropriated more of our time than any of us would have believed possible. Debord reminds us that Trump’s claim to be an “outsider” is true only in the narrow sense of the political establishment -- but not at all in terms of the spectacle, which forged and molded him, and which he manipulates masterfully. For "spectator" and "acting subject" in this passage, read the downtrodden or self-downtrodden white American voter; for "contemplated object" and "spectacle," read you-know-who:

The spectator’s alienation from and submission to the contemplated object … works like this: the more he contemplates, the less he lives; the more readily he recognizes his own needs in the images of need proposed by the dominant system, the less he understands his own existence and his own desires. The spectacle’s externality with respect to the acting subject is demonstrated by the fact that the individual’s own gestures are no longer his own, but rather those of someone else who represents them to him.

“I am your voice,” Trump told the Republican National Convention on the terrifying night he accepted its nomination. He might as well have said, I am the spectacle, which has appropriated your individuality and your desires. He is in fact no one’s voice and has nothing to say; like Orwell’s O’Brien, he believes only in power. He has ripped open the carcass of democracy and exposed the rot, which may have been Trump’s only act of public service. Win or lose on Tuesday, his ghoulish visage will haunt America until its day of judgment, which may come sooner than we think. Whether he stuffs the Christmas tree up the chimbley and flies away cackling remains to be seen.