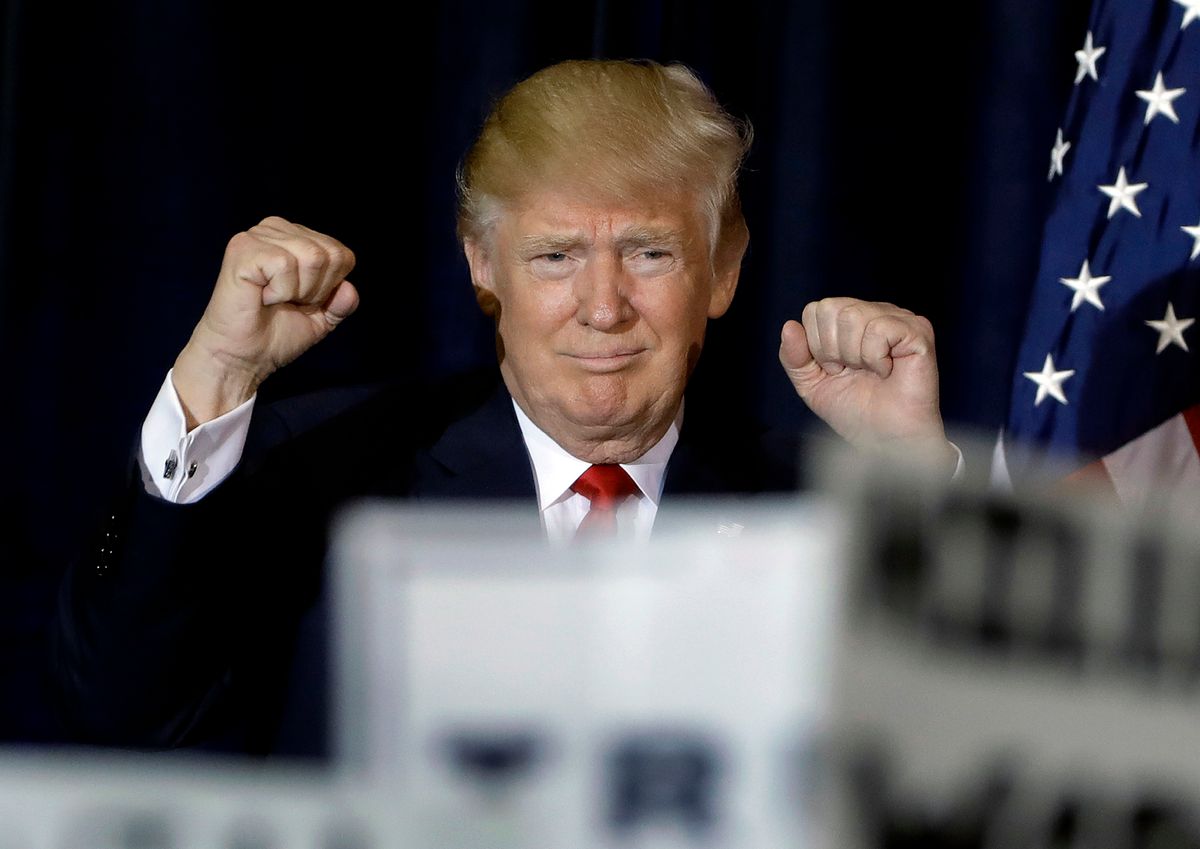 Republican presidential candidate Donald Trump pumps his fists as he takes the stage during a campaign rally Saturday, Nov. 5, 2016, in Tampa, Fla. (AP)
--

Donald Trump is losing more than this election. If recent news reports and his own self-evident behavior are any indication, he may also be losing his mind.

Trump has entered the final days of his campaign increasingly anxious and in need of both discipline and reassurance, according to a shocking New York Times report on Sunday. He barely sleeps and reportedly needs aides to keep him company late at night, particularly his son-in-law and adviser Jared Kushner.

Because his poll numbers are looking worse and worse by the day, he's had to instead point to the size of his rallies and insist that aides vocally share his optimism. When he's in less generous moods, Trump has made ominous threats, such as vowing to create a super PAC after the election that will exact vengeance against politicians he deems to have been enemies.

And these are just the comparative minor incidents. Perhaps the most remarkable story is how Trump's Twitter account — which he once wielded like an ax against everyone from Republican primary opponents and Hillary Clinton to former pageant queens who angered him at 3 a.m. — has been taken over by his staff, who review and edit his tweets before publishing them. Because Trump tweets from an Android phone while his staff uses an Apple computer, it's possible to figure out that the last genuinely Trumpian tweet was this one on Thursday:

ObamaCare is a total disaster. Hillary Clinton wants to save it by making it even more expensive. Doesn't work, I will REPEAL AND REPLACE!

Trump's deteriorating mental state has also had a very real impact on the substance of his campaign. Despite his maintaining comparatively higher discipline now than in the early months of his candidacy, Trump has still shot himself in the foot, despite pleas from those around him.

On Oct. 22, as he prepared for a speech in Gettysburg, Pennsylvania, intended to draw attention to a series of populist policy proposals, Trump insisted on threatening to sue the women who had publicly accused him of sexual assault. Even as aides insisted that this would be viewed as petty and would distract from his ideas, Trump jettisoned more than half of his policy points so he could focus on his grievances.

More recently, this meltdown has been reflected in how Trump manages his rallies. On Sunday he scheduled five rallies in Pennsylvania and Virginia and wound up running egregiously late, culminating in his arriving in Leesburg, Virginia, almost three hours after he was scheduled.

We just landed in Pittsburgh, were a woman is nearly in tears: "Don't schedule five rallies in a day if you can't make them all." pic.twitter.com/k3vU4JFEAQ

wait. Trump still has to hold a rally in Pennsylvania before going to the rally in Virginia that was supposed to start 10 minutes ago? — Sam Stein (@samsteinhp) Nov. 7, 2016

That last tweet deserves special attention since it underscores another sign of Trump's almost shockingly irrational thinking. Of the five states mentioned there, statistical aggregator FiveThirtyEight reports that Trump is calculated as having less than a 1-in-5 chance of winning in three of them: Minnesota, Michigan and Virginia. His odds are only marginally better in Pennsylvania, where his odds are roughly 1 in 4.