Small fires in Oakland. Marches in Pittsburgh and Los Angeles. People were angry 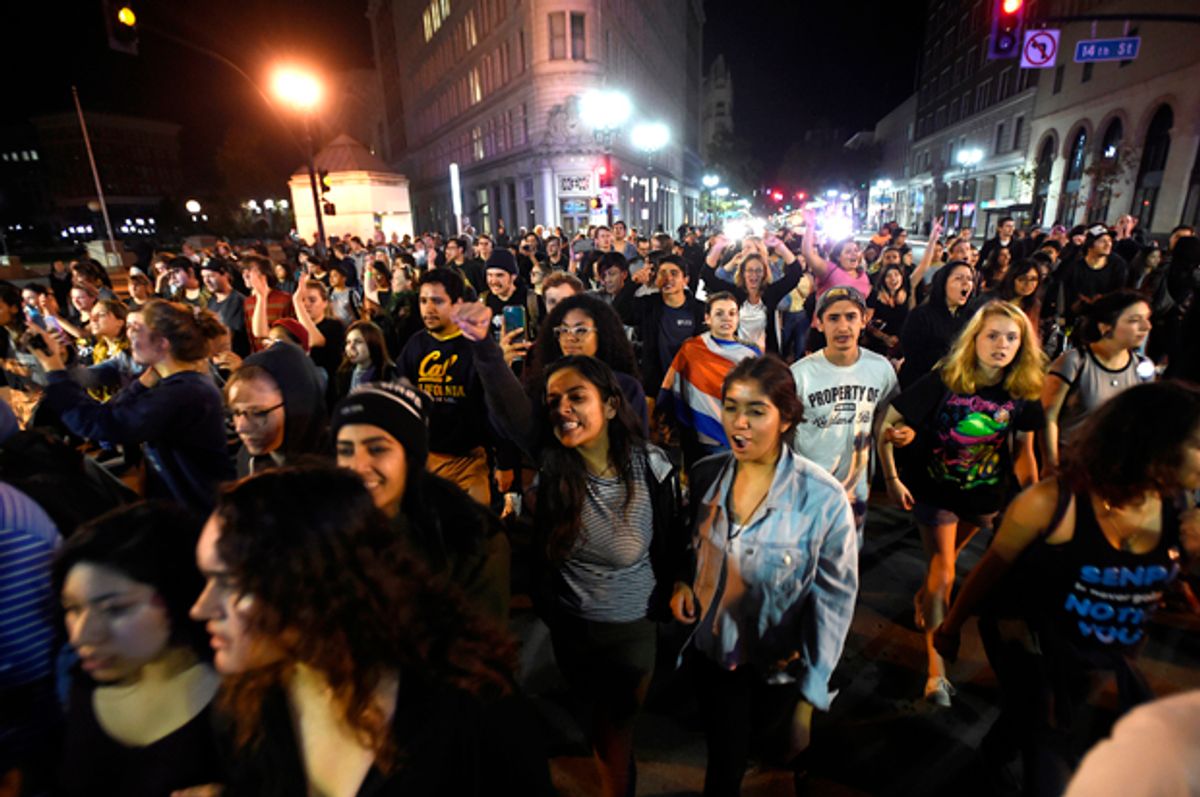 Even before Donald Trump was officially declared the winner of Tuesday's presidential election, there were already protests were already erupting all over the country.

Between 60 and 70 protesters in Oakland gathered in the city's downtown and chanted anti-Trump slogans, with some breaking into stores and setting small fires on the street.

In Los Angeles, between 1,500 and 3,000 UCLA students led a march chanting "Fuck Donald Trump," "Fuck the wall" and "Not my president," according to UCLA's student newspaper. Students at the University of California Irvine led a march through the campus, and a demonstration at the University of California, Santa Barbara was led by the chant "No more Trump! No more Trump!"

One of the more violent protests occurred in downtown Los Angeles, where property was defaced and anti-Trump graffiti sprayed on a fence, although these actions were somewhat offset by a crowd of 30 Trump supporters who rallied to support him near his star on the Hollywood Walk of Fame.

Outside of the Golden State, more than 100 protesters blocked traffic in Portland, Oregon, by putting a dumpster in the middle of the road and chanting "Whose streets? Our streets!" and "That's not my president." Meanwhile, the Seattle Police Department had to close down a street after protesters blocked its intersection.

In Pennsylvania, students at the University of Pittsburgh gathered to protest, even as other students echoed the candidate's call for unity.

More than 1,000 people gathered outside the White House before the results were announced to protest against a Trump administration, Fox News reported, with some even climbing trees to express their discontent. As in Los Angeles, "Fuck Donald Trump" was a popular refrain among the protesters, although they reportedly assembled to oppose Trump based on a range of issues including his immigration platform and his opposition to the social justice ideals of Black Lives Matter.

Here's a look at those, and other protests around the country:

Students are now chanting "not my president" pic.twitter.com/d2EJNytJw7

Gaga is holding a protest against Donald Trump outside Trump Tower pic.twitter.com/vmM01cUYCp

Hundreds chant "not my president" as they take to the streets of Los Angeles in protest of a Donald Trump presidency. #elections2016 #dtla pic.twitter.com/amJbgYVIl8