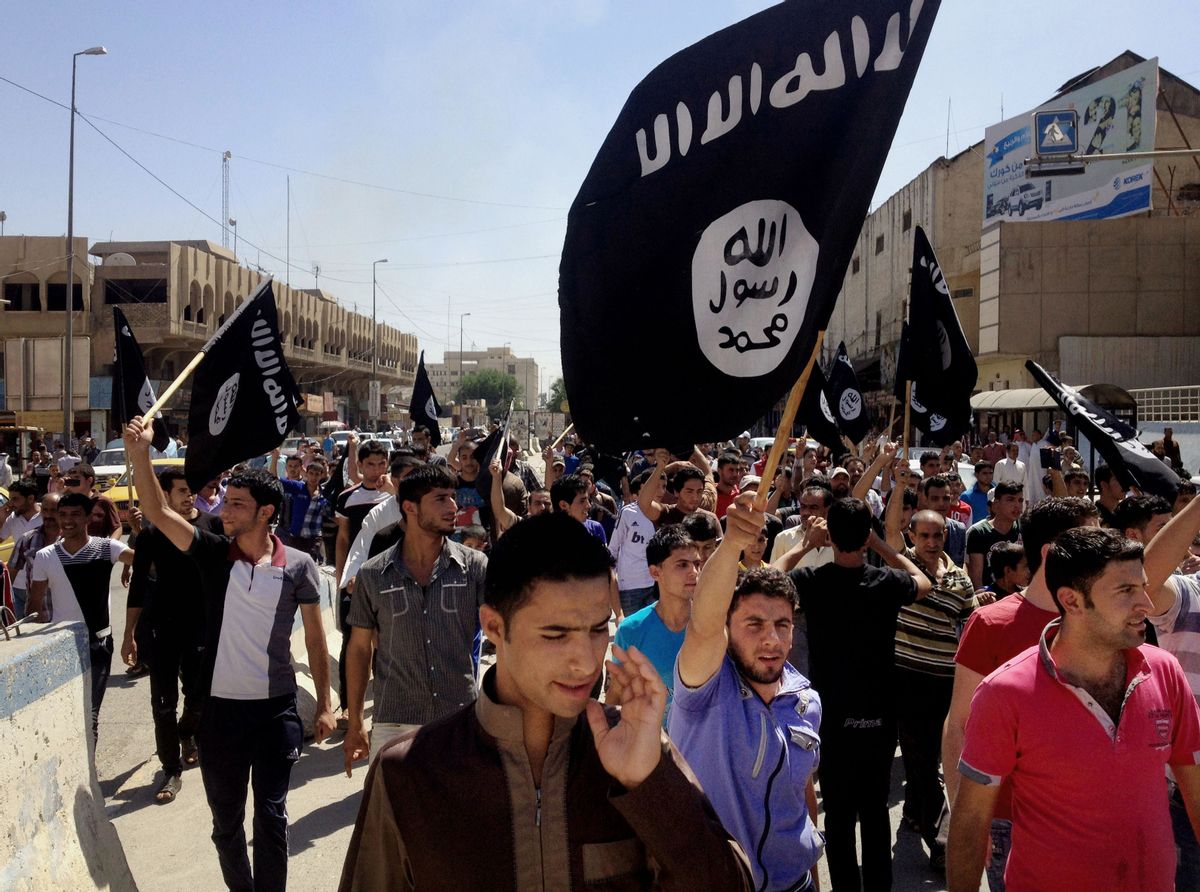 FILE - In this June 16, 2014. file photo, demonstrators chant pro-Islamic State group slogans as they carry the group's flags in front of the provincial government headquarters in Mosul, Iraq. (AP)
--

ISIS reacted to the news of Donald Trump's election to the presidency with jubilation, although that elation may subside if Trump follows through on his avowed plan to team up with Russian President Vladimir Putin.

"Rejoice with support from Allah, and find glad tidings in the imminent demise of America at the hands of Trump,” wrote al-Minbar Jihadi Media, an ISIS-affiliated network, on their website, according to a report by The Washington Post. "Trump’s win of the American presidency will bring hostility of Muslims against America as a result of his reckless actions, which show the overt and hidden hatred against them."

Abu Muhammad al-Maqdisi, an Al Qaeda follower and role model to ISIS founder Abu Musab al-Zarqawi, tweeted that Trump's victory "exposes the true mentality of the Americans, and their racism toward Muslims and Arabs and everything."

Hamza al-Karibi, spokesperson of Jabhat Fatah al-Sham (which used to be affiliated with Al Qaeda), reportedly wrote that "Trump’s victory is a powerful slap to those promoting the benefits of democratic mechanisms."

Even anonymous social media users were chiming in.

While ISIS and other radical Islamist groups are celebrating Trump's victory because they believe it validates their prejudices about America or foreshadows its decline as a world power, Trump's ascent may bode ill for them if he decides to team up with Russian President Vladimir Putin, with whom he has so far enjoyed a warm (albeit impersonal) relationship.

"Russia is killing ISIS," Trump famously declared when discussing Russia's foreign policy toward the terrorist group. "I think it would be great if we got along with Russia. We could fight ISIS together."

Since September 2015, Russia has engaged in a bombing campaign in Syria in order to protect the regime of that nation's dictator, Bashar Assad. More than 3,000 civilians — along with 5,000 extremists — have been killed in the bombing campaign, which has also targeted rebel groups opposed to Russian ally Bashar al-Assad, human rights groups allege.

Trump has also said he would "bomb the shit out of ISIS" if he became president, which would be consistent with Putin's controversial anti-terrorism policies as well.