Is breakfast really the most important meal of the day? Well, it depends 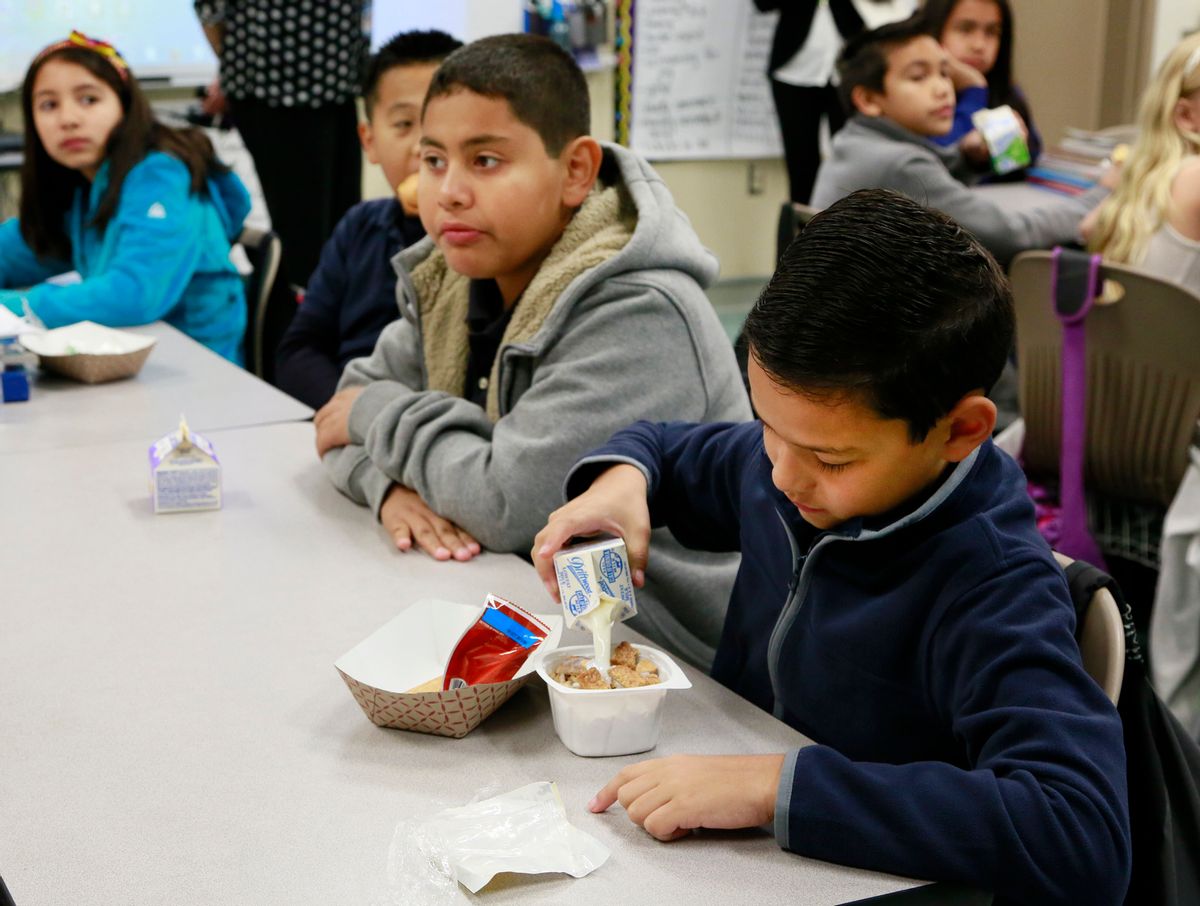 In this Wednesday, April 8, 2015 photo, students are served breakfast at the Stanley Mosk Elementary School in Los Angeles. In this Los Angeles Unified School District program, and in other major urban school districts, breakfast is increasingly being served inside the classroom. The number of breakfasts served in the nations schools has doubled in the last two decades, a surge driven largely by a change in how districts deliver the food. Instead of providing low-income students free or reduced-price meals in the cafeteria, theyre increasingly serving all children in the classroom. (AP Photo/Nick Ut) (AP)
--

The idea that breakfast is the most important meal of the day has been ingrained in our minds. But is it true? The traditional argument is that breakfast is critical to good health, but some experts argue that this idea is overblown.

The conventional wisdom is that if we don’t get specific nutrients like iron, calcium and B vitamins in the morning, chances are we won't get them later in the day. Some nutritionists advise eating breakfast within one hour of waking, because not only do our bodies crave an energy boost right away, but we're also more likely to overeat if we wait.

John L. Ivy, a professor at the University of Texas at Austin researching muscle metabolism and carbohydrate regulation, argues that breakfast should not be missed. “Breakfast is a critical meal because it influences practically every dimension of our being during the course of the day, including how we perform physically and mentally," said Ivy, who is also a fellow at the American Diabetes Association. “Breakfast immediately raises the body’s energy level and restores the blood glucose level to normal after an overnight fast. It also raises the muscle and liver glycogen stores.”

There are numerous studies to support Ivy's claim. One 2009 study conducted by the Institute of Population Health monitored the breakfast habits of more than 1,500 Canadian pre-school children. The authors concluded that eating breakfast every day "is associated with having a healthy body weight, likely due to a more even distribution of energy intake across meals throughout the day."

Likewise, a 2010 U.S. Department of Agriculture study of children from 9 to 18 years old looked at seven years of survey data and concluded that kids who ate cereal had "more favorable nutrient intake profiles" and body mass indexes than their peers who skipped breakfast. The same year, researchers at the University of Milan released a report arguing that skipping breakfast may lead to overeating later in the day, "possibly leading to weight gain over time and deleterious changes in risk factors for diabetes and cardiovascular disease." The authors concluded that eating breakfast regularly "may reduce the risk of chronic diseases due to the potential impact on the composition of the overall diet."

But Aaron E. Carroll, a professor of pediatrics at Indiana University School of Medicine, disagrees. In a recent New York Times article, Carroll argued that the belief in breakfast's importance is rooted in "misinterpreted research and biased studies," writing that "almost all studies of breakfast ... [show] an association, not causation. More than most other domains, this topic is one that suffers from publication bias."

Nutritionist Adda Bjarnadottir agreed that pro-breakfast studies are largely observational. “Chances are that breakfast eaters have other healthy lifestyle habits,” she said. “For example, people who eat breakfast also tend to eat a healthier diet, with more fiber and micronutrients. On the other hand, people who skip breakfast tend to smoke more, drink more alcohol and exercise less. Perhaps these are the reasons that breakfast-eaters are healthier on average. It may not have anything to do with the breakfast itself.”

Although Bjarnadottir cited a 2014 Japanese study that found “no difference in calories burned over 24 hours between people who eat or skip breakfast,” she didn’t mention a critical fact: That same study also found breakfast-skippers who later compensated with bigger lunches and dinners had increased blood glucose — an indicator of diabetes. That's a compelling piece of data that shouldn't be overlooked by the anti-breakfast camp.

Still, there appears to be an outsized belief in the effect breakfast has on overeating and weight gain. In 2013, researchers at the University of Alabama published a meta-analysis of existing studies, arguing that the scientific evidence of the correlation between breakfast and obesity has been distorted. The authors found that "the current body of scientific knowledge indicate that the PEBO (proposed effect of breakfast on obesity) is only presumed true," adding that "the observational literature on the PEBO has gratuitously established the association, but not the causal relation, between skipping breakfast and obesity.”

Last year, New York Times food columnist Gretchen Reynolds looked at scientific support for the importance of breakfast and found it “surprisingly meager." She noted that, of the studies she looked at, “the largest and most provocative of the studies focused on whether breakfast plays a role in weight loss.” That study, which recruited 300 volunteers who were trying to lose weight, found little difference in weight loss between the breakfast-eaters and the breakfast-skippers.

Complicating matters is the idea that the modern breakfast is simply a creation of the food industry, as Anneli Rufus argued in 2011. She contends that the breakfast Americans are used to "is hewn of cravings, insecurities, subliminalities and false confidence conjured by strangers who tell us how to start our days, because they can."

But a study published in March in the journal Pediatric Obesity not only gives credence to the importance of breakfast in maintaining a healthy weight, but also suggests that eating two servings of breakfast is actually better than skipping breakfast altogether. For the three-year study, epidemiologists from Yale University and the University of Connecticut followed 600 preadolescent students from 12 randomly selected schools in a medium-sized urban school district, tracking their breakfast-eating patterns and weight from fifth to seventh grade. Six distinct types of breakfast eaters emerged: 1) frequent skippers; 2) inconsistent school-eaters; 3) inconsistent home-eaters; 4) regular home-eaters; 5) regular school-eaters; and 6) double breakfast-eaters.

Surprisingly, they found that children who ate two servings for breakfast didn’t gain more weight than those who didn’t. On the flip side, the students who skipped breakfast were twice as likely to be overweight or obese. The finding suggests that skipping breakfast may lead to overeating later in the day. “Concerns that a second breakfast at school increases risk of excessive weight gain are unsupported,” the researchers wrote. “Students who regularly consumed breakfasts at school, including double breakfast-eaters, were more likely to exhibit a healthy weight trajectory.”

The study supports the findings of a major review of 28 recent studies published in the Proceedings of the Nutrition Society, which suggests it is healthier to take in the majority of our calories in the morning rather than late at night, as late-night eating may lead to obesity. The meta-analysis, conducted by King's College London, links the health benefits of breakfast to our circadian rhythms, which are not only central to sleeping and eating patterns, but also control a number of biological activities, from brainwave activity, cell regeneration and body temperature to hormone production, our propensity to contract certain types of disease and metabolism.

"Many nutritionally related metabolic processes in the body follow a circadian pattern such as appetite, digestion and the metabolism of fat, cholesterol and glucose," according to the KCL press release of the study. "Food intake can influence our internal clocks, particularly in organs such as the liver and intestine, while our central clock is also regulated by the dark/light cycle which in turn can affect food intake." The authors pointed out that a recent clinical trial of eating patterns revealed that overweight and obese women experienced greater weight loss and improved blood sugar levels when they ate the lion's share of their calories in the morning than in the evening.

Though we have a pretty good idea that a high-fat, high-cholesterol breakfast is probably not the best way to start the day, scientists in the emerging field of "chrono-nutrition" are still working out the best time of day to load up on nutrition.

“While we have a much better understanding today of what we should be eating, we are still left with the question as to which meal should provide us with the most energy,” said Gerda Pot, a visiting lecturer in the Diabetes and Nutritional Sciences Division at King’s College London and lead author of the meta-study. “Although the evidence suggests that eating more calories later in the evening is associated with obesity, we are still far from understanding whether our energy intake should be distributed equally across the day or whether breakfast should contribute the greatest proportion of energy, followed by lunch and dinner.”

Perhaps the link between breakfast and obesity is not causational, and even a bit overblown, especially considering the unique lifestyle and genetic factors that are involved with each individual. But what about the impact of skipping breakfast on cognitive function? That connection appears to be far less studied. A recent search of academic articles on Google Scholar turned up many more papers investigating the relationship of breakfast and obesity (78,100), diabetes (103,000) and heart disease (177,000) than on breakfast and cognition (37,000).

The USDA points out that the current research on breakfast and cognition “shows that students who eat breakfast at school have increased standardized achievement test scores, improved attendance and reduced tardiness. Other research shows that students who eat breakfast have improved academic, behavioral and emotional functioning.” The agency suggests that a healthy breakfast “should consist of a variety of foods, for example, low-fat or fat-free milk, whole grains, lean meats or meat alternates, and fruits and vegetables,” adding that “these menu items will help provide a variety of nutrients and keep students and ready to learn until lunchtime.”

It’s clear that more research is needed to show a causational link between breakfast and physical and mental health. But it appears that if you do go back for seconds during breakfast, it may not be a bad thing as long as the food is healthy and you don't overeat later in the day.