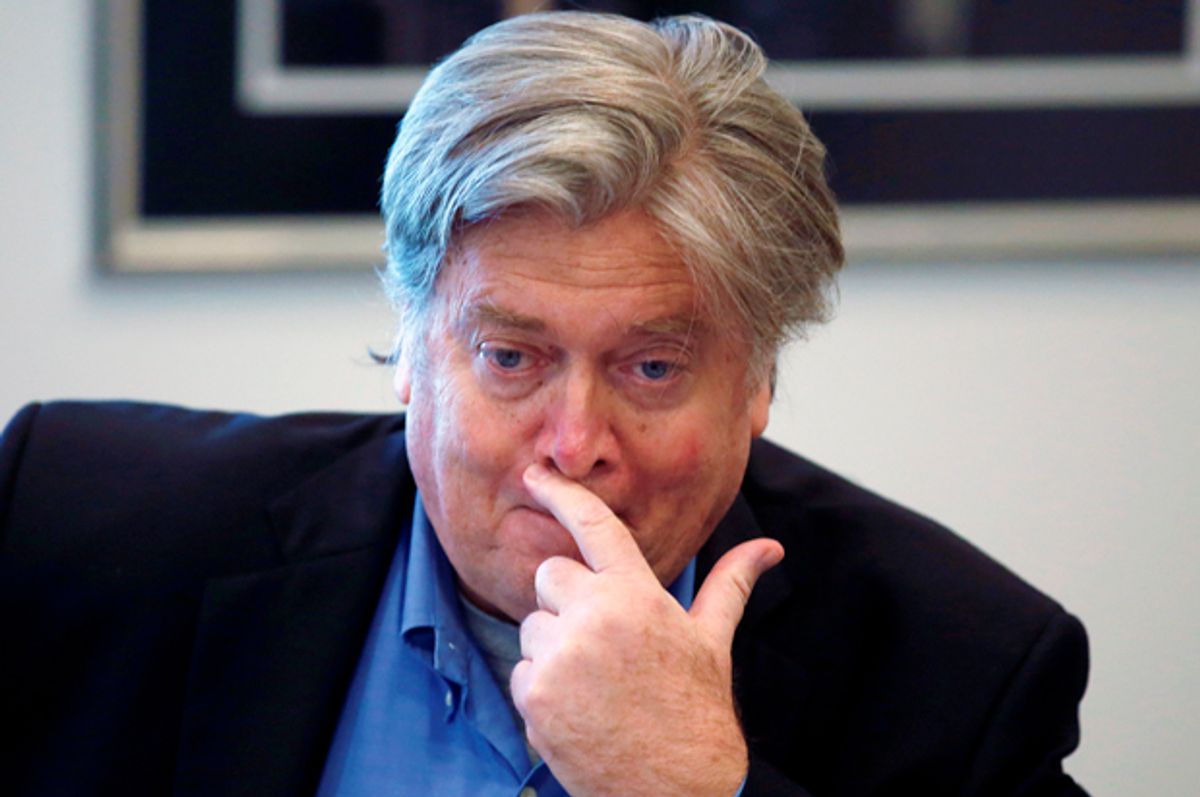 Donald Trump may have horrified decent people by choosing the racist, anti-Semitic, and sexist Steve Bannon as his chief strategist, but the alt-right — which shares all of those prejudices — is predictably celebrating his decision.

"There has been some waffling on some of candidate Trump's signature positions: build the wall, deport illegals, end birthright citizenship, take a hard look at Muslim immigrants, etc," explained Jared Taylor, who runs the alt-right site American Renaissance, in an interview with CNN. "I suspect one of Steve Bannon's important functions will be as an anti-waffler, who will encourage President Trump to keep his campaign promises."

"I must admit that I was a wee bit surprised that Mr. Trump finally chose Mr. Bannon, I thought that his stable of Washington insiders would have objected too vociferously," wrote Rocky J. Suhayda, Chairman of the American Nazi Party, in an email to CNN. "Perhaps The Donald IS for 'REAL' and is not going to be another controlled puppet directed by the usual 'Wire Pullers,' and does indeed intend to ROCK the BOAT? Time will tell."

"I think that's excellent," exclaimed former Ku Klux Klan leader David Duke to CNN's KFile. "I think that anyone that helps complete the program and the policies that President-elect Trump has developed during the campaign is a very good thing, obviously. So it's good to see that he's sticking to the issues and the ideas that he proposed as a candidate. Now he's president-elect and he's sticking to it and he's reaffirming those issues." He later added that "you have an individual, Mr. Bannon, who's basically creating the ideological aspects of where we're going, and ideology ultimately is the most important aspect of any government."

Richard B. Spender, the president of the white nationalist National Policy Institute and widely credited for having coined the term "alt-right," expressed his elation at Bannon's selection on Twitter.

The question is: Which way is the arrow pointing? It's pointing towards the #AltRight!@DrunkRxnryBond

Despite these celebrations, the alt right may not want to embrace Bannon if his rumored problematic personality traits start to crop up. Former Breitbart spokesman Kurt Bardella told Time that Breitbart is someone who would often indulge in “provocative, expletive-laced tirades about any demographic group you can possibly think of. That’s just how Steve is.” “He is legitimately one of the worst people I’ve ever dealt with,” former Breitbart writer Ben Shapiro told the magazine shortly after Bannon was hired by Trump. “He regularly abuses people. He sees everything as a war. Every time he feels crossed, he makes it his business to destroy his opponent.” Breitbart's current staffers have been particularly defensive of their CEO. "So much of the media mocked us, laughed at us, called us all sorts of names," said Alexander Marlow, the site's editor-in-chief, to The New York Times. "And then for us to be seen as integral to the election of a president, despite all of that hatred, is something that we certainly enjoy, and savor."

Breitbart political writer David Horowitz wrote on Monday that the notion of Bannon being anti-Semitic was "stupid."
"I can’t think of anything stupider than the charge coming from all quarters of the left–including a headline in the pathetically wretched Huffington Post–that Bannon is an anti-Semite," he wrote. "The source? A one sentence claim from an angry ex-wife in divorce court no less, that Bannon didn’t want their kids to go to school with Jews. I find that particularly amusing since Bannon wanted to make a film to celebrate this Jew’s life."
Bannon has also been accused of anti-Semitism because of the numerous anti-Semitic articles he has posted on his site, including one that called Washington Post columnist Anne Applebaum "a Polish, Jewish, American elitist scorned" and neoconservative pundit Bill Kristol a "renegade Jew."