Donald Trump isn't sure if he likes the Electoral College or hates it, but will boast on Twitter anyway

A Tuesday morning tweetstorm let everyone know what was on Donald Trump's mind: victory 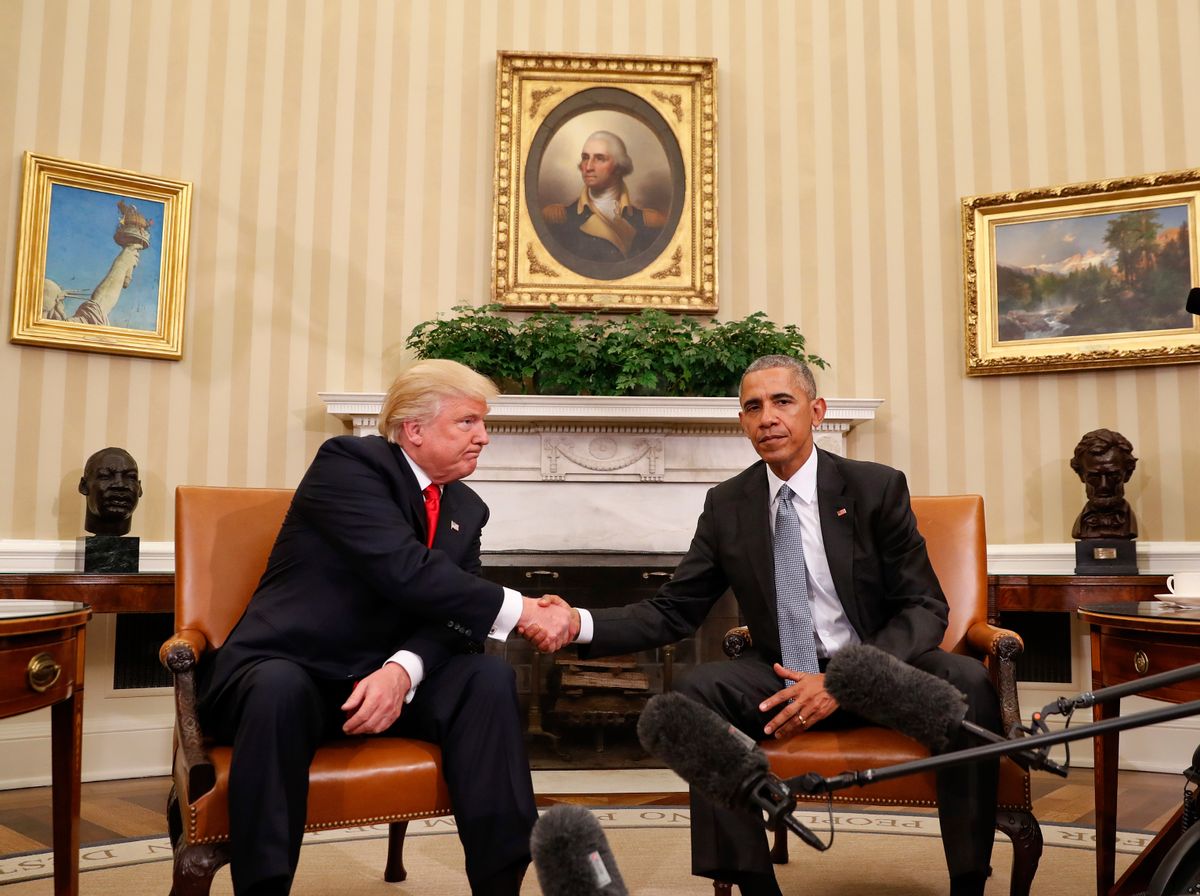 FILE - In this Thursday, Nov. 10, 2016 file photo, President Barack Obama and President-elect Donald Trump shake hands following their meeting in the Oval Office of the White House in Washington. (AP)
--

Although Donald Trump has officially won the 2016 presidential election thanks to the Electoral College, Hillary Clinton will have the consolation of knowing that she beat Trump in the popular vote. The final margin has yet to be determined (current estimates hover between 600,000 and 800,000 — a difference of 0.3 percent to 0.5 percent), but it's clear that more people voted for Trump's chief rival than Trump himself.

If his Tuesday morning tweets are any indication, this reality is really getting under The Donald's skin.

If the election were based on total popular vote I would have campaigned in N.Y. Florida and California and won even bigger and more easily

The Electoral College is actually genius in that it brings all states, including the smaller ones, into play. Campaigning is much different! — Donald J. Trump (@realDonaldTrump) November 15, 2016

This isn't the first time that Trump's tweeted about the Electoral College. Back when he did so in 2012, though, he had a much less favorable position on the institution.

The electoral college is a disaster for a democracy.

If you think this inconsistency can be explained by the four-year gap between the set of tweets (as well as the obvious fact that Trump's victory in 2016 can be solely attributed to the Electoral College), guess again. During his interview with Lesley Stahl of "60 Minutes" on Sunday night, Trump contradicted his opinion on the Electoral College within the same statement.

"I’m not going to change my mind just because I won," Trump said after Stahl drew attention to his 2012 tweet. "But I would rather see it where you went with simple votes. You know, you get 100 million votes and somebody else gets 90 million votes and you win. There’s a reason for doing this because it brings all the states into play. Electoral College and there’s something very good about that. But this is a different system. But I respect it. I do respect the system."

Trump also told Stahl four times during the interview that he had won the election "easily," apparently misunderstanding that an upset victory is not the same thing as a comfortable one.

Trump is only the fifth presidential candidate in American history to win in the Electoral College despite losing the popular vote. While the first three occurred in the 19th century (John Q. Adams in 1824, Rutherford Hayes in 1876, and Benjamin Harrison in 1888), the last two occurred at the onset of the 21st century — first George W. Bush in 2000 and now Donald Trump in 2016 — and both were Republicans.

A shift of less than 120,000 votes in those three so-called "Blue Wall" states would have given Clinton 278 electoral votes, more than enough to win in both the Electoral College and the popular vote. Similarly,voter suppression efforts by Republican officials in states like Wisconsin may have also contributed to his victories in those states (Voter ID laws seem to have been responsible for a 41,000 vote drop in Milwaukee, Wisconsin, more than enough to cover the margin of Trump's victory in that state).