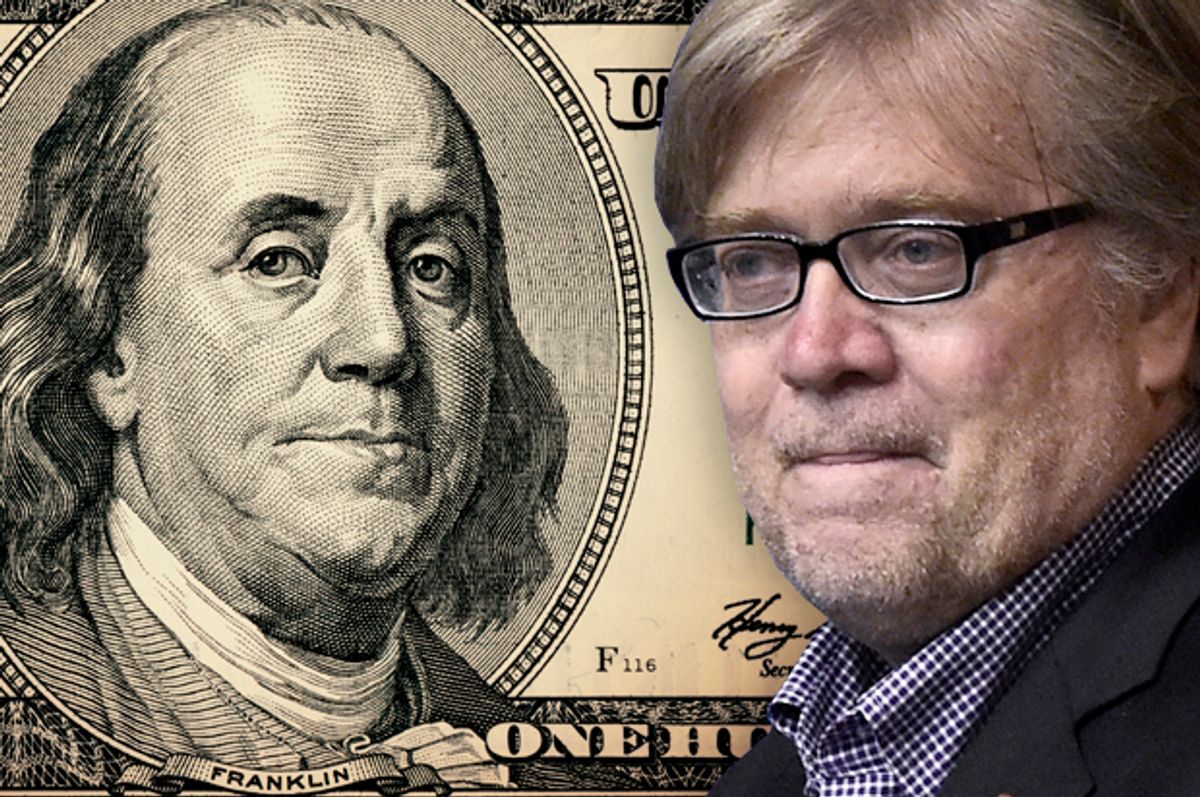 Perhaps the most unnerving aspect of Donald Trump's presidential victory is watching the media immediately mainstream his white nationalist lieutenant, former Breitbart News chairman Steve Bannon, whom Trump has appointed as White House strategist. It's not a symbolic position; in previous administrations, it was held by the likes of Karl Rove.

According to Kellyanne Conway, Bannon is a "brilliant tactician" and the "general" who ran the winning campaign, so he will have immense power and access to the Oval Office. This is an amazing turn of events. A man who was a  fringe player on the far right a year ago is the new president's Rasputin.

Ken Blackwell, Ohio's notorious former secretary of state and a member of the Trump transition team, described the division of labor between Reince Preibus, the outgoing Republican National Committee chairman who has been named chief of staff, and Bannon this way:

Bannon is going to be keeper of the image of Trump as a fighter against the status quo, and Reince is going to utilize his personal connections with the speaker and others, to make the trains run on time.

Yes, he actually used the phrase "make the trains run on time." The only good part of that is that he was referring to Priebus, the colorless bureaucrat, not Bannon, the white nationalist. (Actually, after consulting Hannah Arendt on the banality of evil, I remembered there isn't much difference between the two under the right circumstances.)

There has been a lot written about Bannon in the last few days. But the gold standard in Bannon journalism remains this piece from last summer by Bloomberg's Joshua Green, presciently headlined, "This Man Is the Most Dangerous Political Operative in America." It's a scary look at a very scary man. And now that scary man has a tremendous amount of power.

There are dozens of facets to the Bannon story worth exploring in depth, but one project was particularly important to the election of Republican nominee Donald Trump. Breitbart News surely played its part, but it was Bannon's blandly named Government Accountability Institute that really did the job. Green described as it as a nonprofit organization designed to create indictments against major politicians and then to partner with mainstream media like The New York Times and The Washington Post to achieve wide dissemination. [This paragraph has been corrected. See below.]

Its main contribution to the 2016 campaign was a best-seller by the Government Accountability Institute's president (right-wing propagandist Peter Schweizer) called "Clinton Cash: The Untold Story of How and Why Foreign Governments and Businesses Helped Make Bill and Hillary Rich," which I wrote about for Salon. The mainstream press cooperated eagerly and the book created the framework for the "Crooked Hillary" theme that dominated the campaign.

After years of following high-profile right-wing donors like the Koch brothers, a new day has dawned in Republican politics when it comes to the big money. Those deep-pocketed billionaires will surely still wield influence in politics around the country, but Trump is not one of their creatures.

Still, there is one pair of super donors in the Trump inner circle and they happen to be in Steve Bannon's inner circle as well: hedge-fund billionaire Robert Mercer and his daughter Rebekah.

While the Koch brothers are libertarian ideologues and fellow right-wing billionaire Sheldon Adelson is singularly focused on the state of Israel and his gambling empire, the Mercers are something else entirely. They are fringe kooks with a vast fortune and a willingness to back other fringe kooks, including Steve Bannon. Rebekah Mercer was a director of his Government Accountability Institute propaganda outfit, and the family has heavily funded Breitbart News.

Both Mercers have spent tens of millions on various right-wing candidates and institutions in recent years, including establishment organizations like the Heritage Foundation and the Cato Institute. In the Republican primaries they backed Sen. Ted Cruz with the Keep the Promise super PAC  and later the Defeat Crooked Hillary PAC. Both of those groups employed Kellyanne Conway and David Bossie, who later joined the Trump campaign alongside Steve Bannon, reportedly at Rebekah Mercer's urging.

According to this fascinating profile by Bloomberg's Zachary Mider, Robert Mercer is an extremely eccentric character, a machine-gun-collecting computer genius who made his billions relatively late in life when he was hired by the Renaissance Technologies hedge fund to "crunch market data and spot patterns a human trader would overlook." Mercer was extremely successful there and became CEO in 2009, along with another quant who had come to the fund with him from IBM.

He may be a genius with computers and financial data, but when it comes to politics Mercer more closely resembles tinfoil-hat conspiracy nuts like Alex Jones. Indeed, it's hard to find a fringe scientific theory he hasn't thrown money at, from climate change denial to conferences that feature speakers presenting "evidence" that HIV does not cause AIDS and the disease is an elaborate government cover-up of the health risks of "the homosexual lifestyle."

He's also put a lot of money into groups promoting far-right economic theories, including the weird idea that "fractional reserve banking," which is something banks have always done — lending their depositors' money to others— is a massive fraud. He is also a huge proponent of returning to the gold standard, of course.

These are just the tips of Mercer's iceberg of weirdness. Looking at the long list of crazy stuff  he's involved with, it seems that Mercer believes everything he reads or hears from right-wing kooks — and that con men and grifters can see him coming a mile away. Indeed, the Mercers seem to be financing pretty much every far-right fringe organization and wacky theorist in America, with causes including white nationalism, climate denial and quack medicine. So naturally they are major backers of our new fringe president-elect.

How much influence they will have in the White House remains to be seen. But Rebekah Mercer was named last week to Trump's transition team, and one of the Mercers' closest associates has just been named the White House chief strategist. So their wacky ideas will certainly get a hearing in the Oval Office.