The anti-“Gravity”: What “Arrival” gets right that Sandra Bullock’s space odyssey didn’t 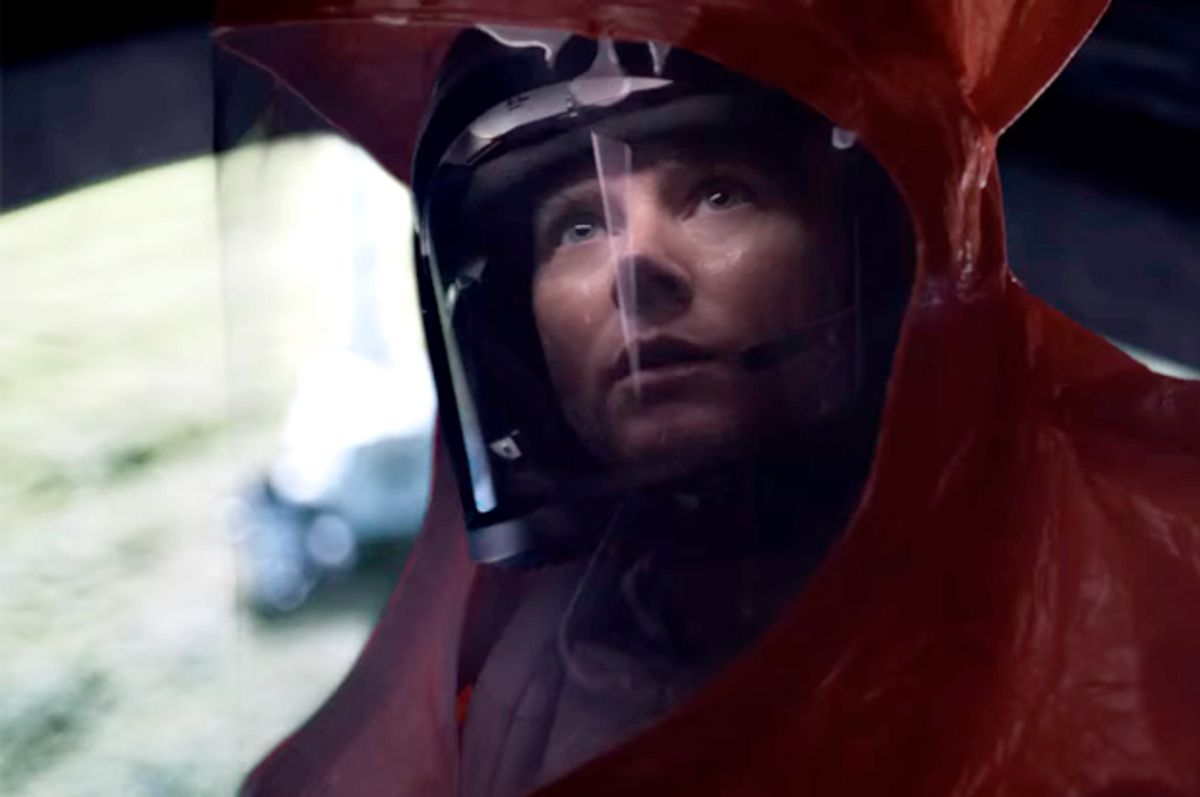 “Arrival” is this year's antidote to “Gravity.” Alfonso Cuarón’s 3-D space ballet was a weightless technical wonder brought down to Earth by rote melodrama, but in Denis Villeneuve’s excellent science-fiction mind-bender, the spectacle is rooted in the divine mysteries of the human heart.

Adapted from Ted Chiang’s “Story of Your Life,” “Arrival” explores what would happen if aliens were to make to contact. In Steven Spielberg’s “Close Encounters of the Third Kind,” humans and extraterrestrials discover that they have the ability to communicate through lights and music — the universal language. Making conversation with the Cthulu-like creatures in “Arrival” isn’t so simple.

After 12 alien spacecrafts, which resemble giant almonds, come to Earth, government officials tap Louise Banks (Amy Adams), a linguist haunted by visions of her daughter, to decipher their language. The syntax, in which sentences are composed in a continuous circle, is unlike anything she’s ever seen. It shows a nonlinear understanding of time, as if all of creation were unfolding simultaneously.

The sentient squid in “Arrival” are truly something to behold. Carlos Huante, a character designer for films like “War of the Worlds” and “Men in Black,” has created an alien race that is both fearsome and mysterious, obscured behind a glass partition and thick, white fog that never allows the viewer to see too much. After Banks and her team — which includes Ian Donnelly, played by Jeremy Renner — board the ship, the aliens beckon her crew closer to the glass. This gesture of empathy is profoundly unsettling. Should the researchers come closer or shoot first and ask questions later? Even if aliens came to Earth to help us, the film argues, it would be difficult to not let humanity’s worst impulses get in the way.

Although Banks devises a system to communicate with the aliens through image association, translation becomes a difficult task simply because words can have so many meanings. The septapods claim to have brought a “weapon” for humans, but do they really mean “tool?” The Chinese, who have also been in contact with the extraterrestrials, take it as a sign of aggression and tell the alien visitors to evacuate before the country launches a preemptive strike. One wrong word could mean the end of mankind.

The script, a 2012 Black List selection, was written by Eric Heisserer. He wrote the screenplay for this year’s “Lights Out,” a horror film about depression grounded in the fear of motherhood. “Arrival” also uses the family as the backdrop for the terror of alien invasion. The film is punctuated by memories of Banks’ daughter, who dies of cancer in an “Up”-like sequence in its opening moments. Like Louise, the audience sees her daughter’s entire life, one that ends much sooner than those around her had expected.

The “dead kid” trope was also explored in Cuarón’s picture: Ryan Stone (Sandra Bullock) loses hope after the death of her daughter but finds the strength to move on after her spaceship is destroyed by meteorites — and her entire crew killed. Her child’s memory gives her a reason to fight to go home.

You loved “Gravity,” and so did the rest of us. It’s a masterpiece of style over substance, in which its human story is totally at odds with the awe its 3-D wizardry inspires. Bullock, who felt that her character lacked motivation, lobbied for a backstory for Stone and got one. The problem is that it’s dripping with camp, ending in a closing monologue that’s a gift to drag queens everywhere. “Can you please tell [my daughter] that Mama found her red shoe?” Stone asks in an address to her co-pilot, who is dead and cannot hear her. “She was so worried about that shoe, Matt! But it was just right under the bed.” Minutes later, as her shuttle is hurtling toward Earth, Stone claims that her death would be “one hell of a ride!”

These films share similar themes but approach them in completely different ways. “Gravity” argues that by accepting the inevitability of death, you can embrace life. “Arrival” doesn’t offer such firm answers about the nature of fate — it’s far too enigmatic for that — but requires the audience to come to its own conclusions. For instance, the film asks if you knew that your loved one would die when you met, would you still want to know him or her? Would you walk away or would you carry on, anticipating tragedy, but savoring the moments in between?

These questions are presented in a puzzle-box scenario that will undoubtedly be less satisfying for some viewers than others. The audience in my theater groaned when an unexpected twist revealed a crucial deception in the film’s framing structure, one that points not toward the past but the future. It’s difficult to say if the “gotcha!” moment totally makes sense.

If you were to get an unexpected yet important message from a total stranger years from now, one that irrevocably alters the destiny of mankind, how is that even possible if there would be no future without the stranger’s very intervention? If it is confusing to attempt to explain the plot holes in “Arrival.” They are even more confusing to watch.

Although the story doesn’t always hold up on a logical level, what separates the film from “Gravity” is how well it works on an emotional one. “Dead kid” movies often use grief and loss to explain away basic character motivations, but “Arrival” is rooted in the power of its phenomenal acting to convey what, as the film seems to suggest, language cannot. Adams, one of cinema’s most expressive and versatile actresses, is a one-woman orchestra of feeling. Those famously big eyes, forever on the verge of shedding a tear, are depthless pools of sorrow, suffering and hope. Her grief doesn’t just serve the plot; it illuminates the film around her.

As a reviewer, I can’t say whether I always understood “Arrival” or why things happened the way they did. But as a viewer, I always understood these people, what they wanted and why they wanted those things. Given what the film says about the inherent struggle of making oneself known to others — whether it’s aliens, foreign powers or even those closest to you — that seems like the true moral victory.