"It only helps us when [the media] get it wrong. When they’re blind to who we are and what we’re doing” 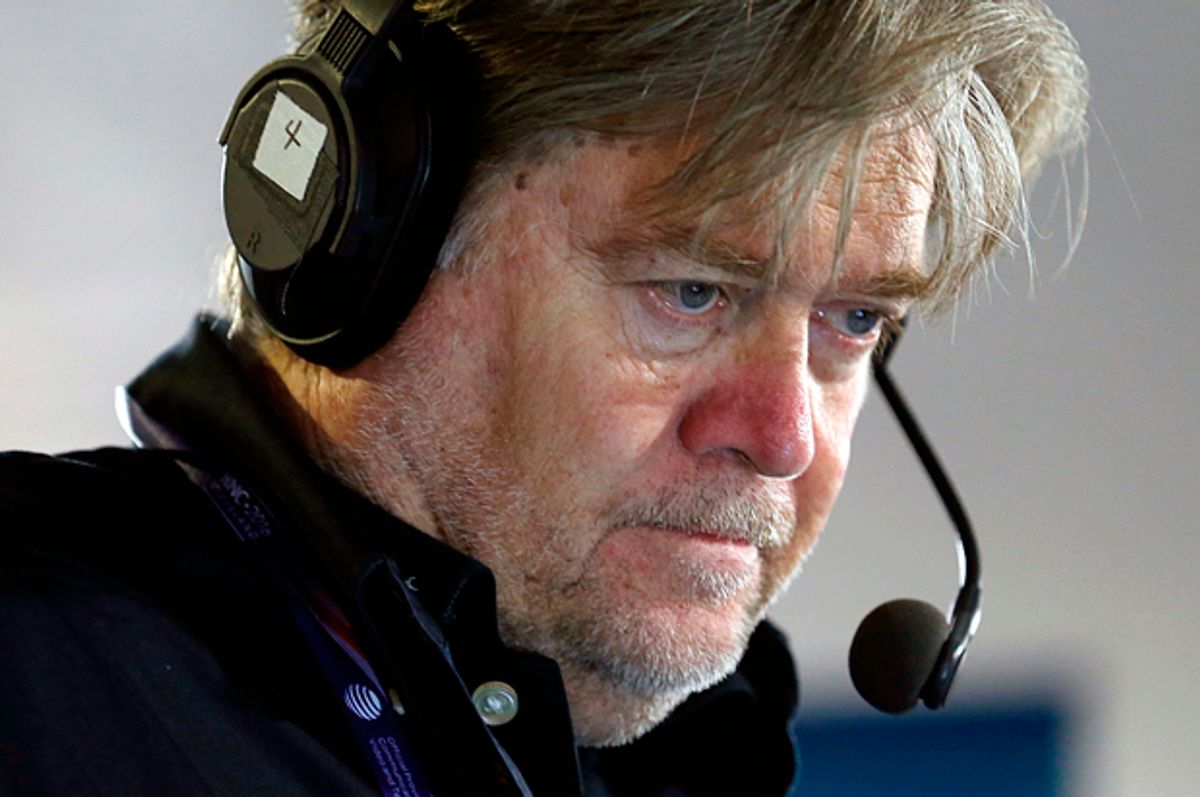 CLEVELAND, OH - JULY 20: Stephen K. Bannon looks at his computer to see who will be the next caller he will talk to while hosting Brietbart News Daily on SiriusXM Patriot at Quicken Loans Arena on July 20, 2016 in Cleveland, Ohio. (Photo by Kirk Irwin/Getty Images for SiriusXM) (Getty/Kirk Irwin)
--

Caught in the midst of a national controversy surrounding his naming as top White House adviser to President-elect Donald Trump following a stunning upset victory last week, Steve Bannon railed against what he described as the elite liberal media that is slowly suffocating this nation in his first post-election interview with none other than The Hollywood Reporter.

On the same day Texas Senator Ted Cruz made a most improbable visit to Trump Tower, The Hollywood Reporter's Michael Wolff sat down for an interview with the former Breitbart head and Trump campaign CEO who has been notably reluctant about media profiles in the past.

“The media bubble is the ultimate symbol of what’s wrong with this country,” Bannon told Wolff. “It’s just a circle of people talking to themselves who have no f—ing idea what’s going on."

Bannon, who took a leave of absence from overseeing his right-wing news site in August to take over as Trump's third campaign manager, was the second person named to a position in the future Trump administration after the reality-TV star beat rival Hillary Clinton last Tuesday. Bannon has since come under intensified criticism from Congressional Democrats and some in the media for his non-Senate approved position as Trump's chief strategist.

Despite the cries that Bannon's a white nationalist, Wolffe described a much more focused Trump transition than recent reports and trial balloons have depicted -- helmed by a man whose mission it is to ensure Trump's presidency "represent[s] something intellectually and historically coherent."

Bannon told Wolff that he relishes the hatred his name conjurs up in what he called the “donor class" and “the metrosexual bubble."

“Dick Cheney. Darth Vader. Satan. That’s power. It only helps us when they—get it wrong. When they’re blind to who we are and what we’re doing,” Bannon said of his detractors who criticized the far-right, white nationalist movement that Breitbart and others have successfully rebranded as the alt-right.

“I’m not a white nationalist, I’m a nationalist. I’m an economic nationalist,” Bannon insisted. “The globalists gutted the American working class and created a middle class in Asia. The issue now is about Americans looking to not get f—ed over. If we deliver we’ll get 60 percent of the white vote, and 40 percent of the black and Hispanic vote and we’ll govern for 50 years. That’s what the Democrats missed, they were talking to these people with companies with a $9 billion market cap employing nine people. It’s not reality. They lost sight of what the world is about.”

Bannon said he hoped to harness Trump's mastery of communication to build an Andrew Jackson like populism that will be "greater than the Reagan revolution — conservatives, plus populists, in an economic nationalist movement”:

We’re going to build an entirely new political movement ... It’s everything related to jobs. The conservatives are going to go crazy. I’m the guy pushing a trillion-dollar infrastructure plan. With negative interest rates throughout the world, it’s the greatest opportunity to rebuild everything. Ship yards, iron works, get them all jacked up. We’re just going to throw it up against the wall and see if it sticks.

“You have probably the greatest orator since William Jennings Bryan," Bannon said of Trump. "Coupled with an economic populist message and two political parties that are so owned by the donors that they don’t speak to their audience. But he speaks in a non-political vernacular, he communicates with these people in a very visceral way. Nobody in the Democratic party listened to his speeches, so they had no idea he was delivering such a compelling and powerful economic message. He shows up 3.5 hours late in Michigan at 1 in the morning and has 35,000 people waiting in the cold. When they got [Clinton] off the donor circuit she went to Temple University and they drew 300 or 400 kids.”

Bannon told Wolff that, as a longtime media observer, he was always confident Trump would win.

"It’s a closed circle of information from which Hillary Clinton got all her information — and her confidence. That was our opening,” Bannon said.

He continued: “I knew that she couldn’t close. They out-spent us ten to one, had ten times more people and had all the media with them, but I kept saying it doesn’t matter, they got it all wrong, we’ve got this locked.”

Read the rest at The Hollywood Reporter...