From the bully pulpit to Broadway: Pence's big night out at "Hamilton" 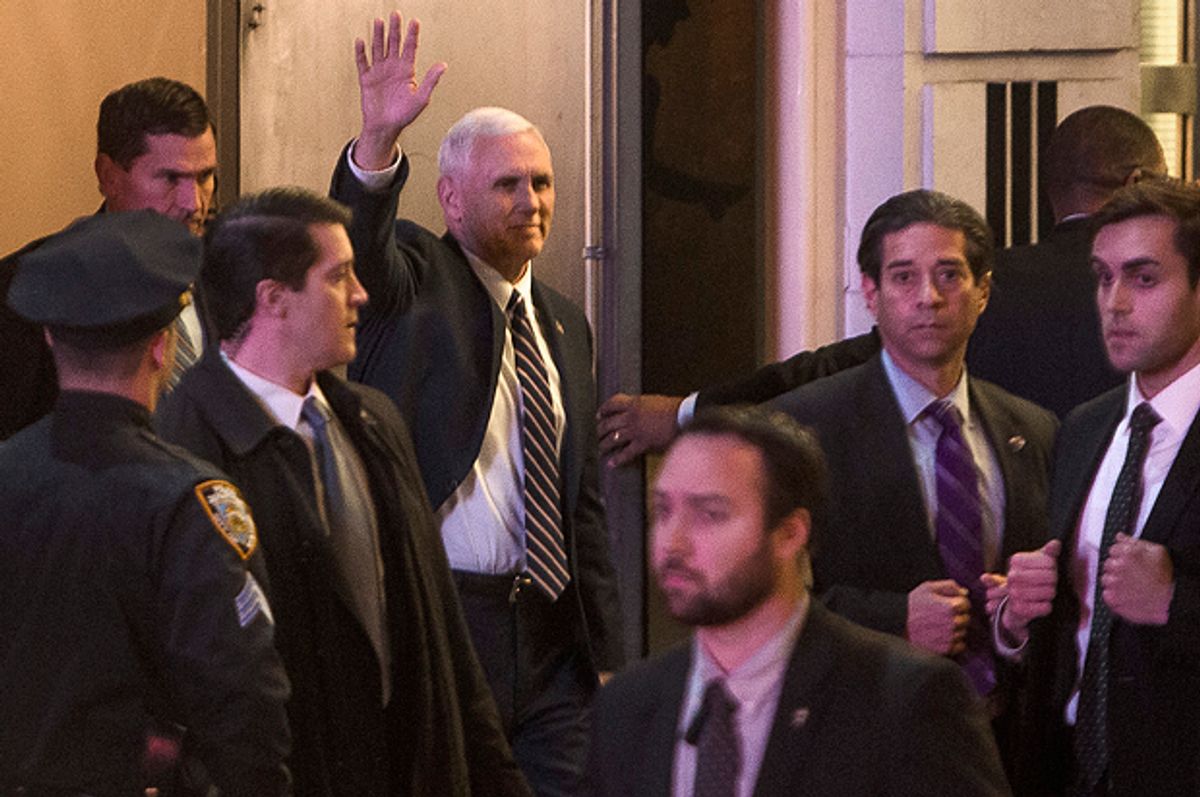 "Hamilton" is a play heralded, among many things, for its colorful cast of minority and LGBT performers. And Pence, the former governor of Indiana, has been a vocal opponent of equal rights for LGBT Americans, even going so far as to advocate for gay conversion therapy. He has also not been a strong ally to minority communities, responding, for instance, to unrest following police shootings in Tulsa, Oklahoma, and Charlotte, North Carolina, earlier this year by saying there’s too much talk of “institutional racism and institutional bias.”

That Pence was booed before, during and after the show on Friday night had to have been expected, given the liberal New York crowd at the Richard Rodgers Theatre. But a surprise came at the end of the show, when Brandon Victor Dixon, the actor who played Aaron Burr, encouraged the audience to pull out their phones and record a statement directed at Pence, which had been written ahead of time by the show's creator and former star, Lin-Manuel Miranda, director Thomas Kail and lead producer Jeffrey Seller, with input from the cast, as reported by the New York Times.

“Vice President-elect Pence, we welcome you, and we truly thank you for joining us here at ‘Hamilton: An American Musical.’ We really do. We, sir, we are the diverse America who are alarmed and anxious that your new administration will not protect us, our planet, our children, our parents, or defend us and uphold our inalienable rights, sir. But we truly hope this show has inspired you to uphold our American values and work on behalf of all of us. All of us. Again, we truly thank you for (sharing) this show, this wonderful American story told by a diverse group of men and women of different colors, creeds and orientations.”

Though Pence left the auditorium before Dixon finished speaking, he lingered in the hallway and listened to the full message, according to a show spokesman. Pence didn’t respond to the plea. But this morning, after videos of Dixon went viral, President-elect Donald Trump added fuel to the fire, tweeting: "Our wonderful future V.P. Mike Pence was harassed last night at the theater by the cast of Hamilton, cameras blazing. This should not happen!"

"The Theater must always be a safe and special place. The cast of Hamilton was very rude last night to a very good man, Mike Pence. Apologize!"

Dixon tweeted a measured but unapologetic response to Trump.

The whole sequence should inspire doubt in anyone who had hoped that Trump would change once he was elected. It also raises a whole host of questions. Such as: If politely doubting that the “new administration” will “protect us, our planet, our children, our parents, or defend us and uphold our inalienable rights” constitutes harassment, what do you call this? How does Mike Pence feel about Donald Trump fighting his battles for him? Does he feel emasculated and belittled? Will President Trump demand an apology every time a prolific institution does something that rubs him the wrong way? What will happen if and when they refuse?

Many Trump supporters took to Twitter to voice their dissatisfaction with the "Hamilton" cast’s message, vowing to #BoycottHamilton. The Hamilton cast and crew probably isn’t losing any sleep, though. As actor Jeffrey Wright tweeted, “Good luck with that. Tickets are already sold-out past President-elect Troll's impeachment.” (In reality, tickets are sold out through the middle of August 2017.)

Though a "Hamilton" boycott probably will not make much of a difference for "Hamilton’s" bottom line, it is the latest example of the fracturing and politicizing of ostensibly non-political culture in the immediate aftermath of the presidential election. In her first post-election show the singer Mitski requested that anyone who had voted for Trump leave the show, offering to refund their tickets. "This is a safe space,” she said according to the tweets of one attendee. “Voting for him was a violent act." She would later write a series of tweets elaborating on why she had made the request. “Trump’s platform is violently hateful, he incites violence at his conventions. . .  His proposed policies will cause death + violence to millions of minorities, so voting for that is to say ‘I wish violence on these people.’ this is not abt difference in beliefs, this is about giving the people at my show, many of them queer/ppl of color, just 1 night of feeling safe + free of harm.”

Seen in concert, the division has a very you’re fired, no I quit feel to it. And it may all just serve to distract us from bigger news coming out of the Trump camp. Trump agreed yesterday to a $25 million settlement in the Trump University case that he had been facing for years. Every victim will receive restitution and Trump will be forced to pay the State of New York $1 million for violating state education laws. Just don’t expect him to apologize.