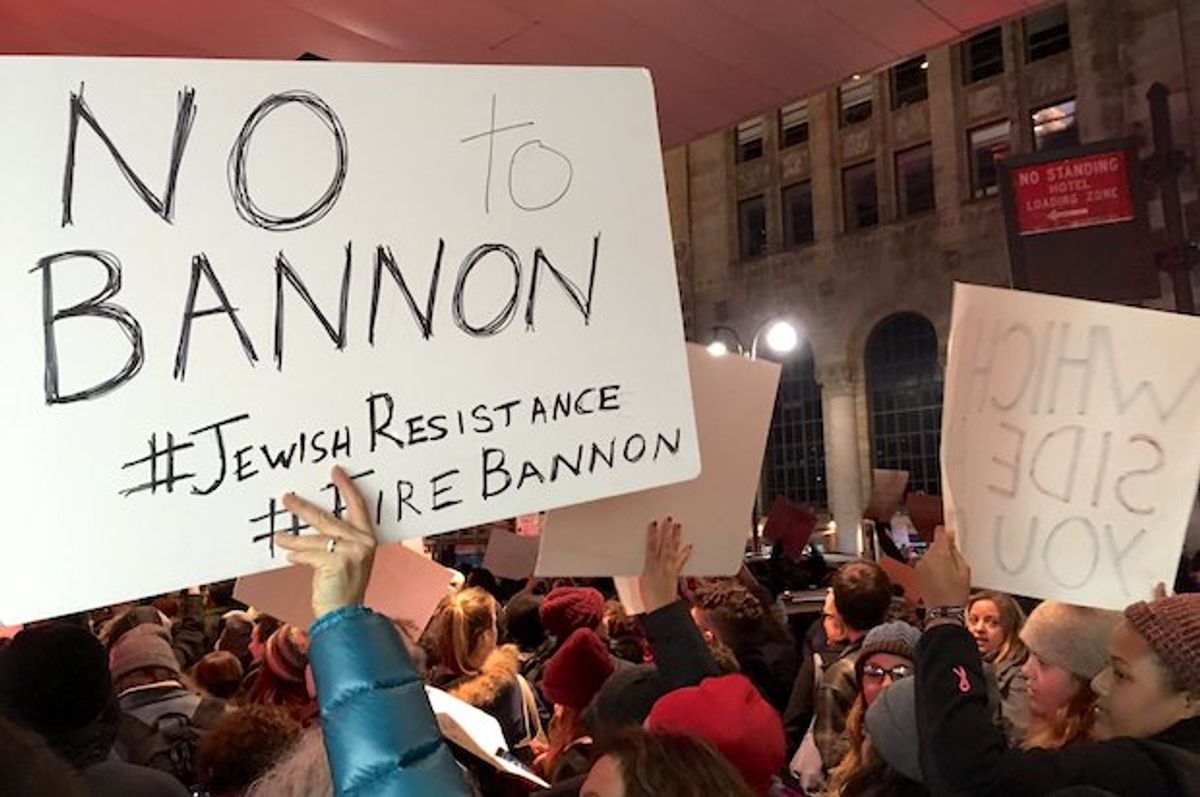 Hundreds of people from the Jewish community gathered in New York City on Sunday night to protest the racism of the Donald Trump camp and the support his impending administration is already getting from right-wing pro-Israel groups.

The Zionist Organization of America, one of the most influential pro-Israel groups in the U.S., invited Steve Bannon to speak at its annual gala on Sunday. Bannon is Donald Trump's right-hand man, and a key figure in the so-called "alt-right," a far-right, white supremacist movement.

Activists marched on the gala at the Grand Hyatt Hotel, chanting against Bannon and the xenophobia and Islamophobia of the Trump camp.

Bannon, who previously served as the CEO of Trump's campaign, was appointed last week as chief strategist and senior counselor for the Trump White House. Before joining Trump's campaign, Bannon headed the far-right website Breitbart News, a key publication in the racist "alt-right" movement.

Even longtime Republican Party insiders have warned about Bannon's right-wing extremism. Influential GOP strategist John Weaver said of Bannon, "The racist, fascist extreme right is represented footsteps from the Oval Office." And hard-line conservative pundit Glenn Beck compared him to the Nazi propagandist Joseph Goebbels, calling Bannon “quite possibly the most dangerous guy in all of American politics.”

The protest Sunday night was organized by the social justice and peace groups IfNotNow, Jewish Voice for Peace and Jews for Racial & Economic Justice. The organizations estimated that roughly 800 demonstrators showed up.

Many protesters were Jewish, and were joined by activists from the Muslim, Black and Latina/o communities. The Muslim Jewish Anti-Fascist Front, a new group that was formed after Trump's election, also participated in the demonstration.

"I am outraged that a white supremacist, who has been at the helm of a news organization trafficking in racism, anti-Muslim and anti-Jewish bigotry, will have a desk in the West Wing and the ear of the President," Sarah Lerman-Sinkoff, a member of IfNotNow, said in a statement about the protest.

"In accommodating Steve Bannon, the ZOA has proven yet again that they would rather support white supremacy and racism over the safety and dignity of Muslims, immigrants, Palestinians and Jews," Lerman-Sinkoff added.

Bannon did not show up for the gala on Sunday night. He did not say why he did not attend, but activists saw this as a small victory.

Some Jewish activists pointed out the hypocrisy of pro-Israel groups that have long equated criticism of Israel with anti-Semitism yet that are now actively downplaying the actual anti-Semitism and racism of the far right.

“The Zionist Organization of America has a long history of using accusations of antisemitism to silence critical discussion of Israel policy, and harassing Muslim and Palestinian students on campuses across the country,” Beth Miller, from Jewish Voice for Peace - New York, said in a statement.

"With its embrace of Bannon, the ZOA is proving yet again that racism, anti-Muslim and anti-Jewish bigotry can all converge on one thing: support for Israeli policies," Miller added. "The policies that people are outraged by in Trump's agenda, like building a wall, deporting refugees, policing people's religious identities, are already being implemented in Israel. Our community must stand up against all forms of state violence and bigotry, both here and there."

During his campaign, Donald Trump cited Israel's separation wall in the occupied West Bank in order to justify his own racist, anti-immigrant policies. The International Court of Justice has clearly said the wall is illegal, and Palestinians and Israeli activists call it an apartheid wall.

Trump's campaign has highlighted the alliance between the far right and pro-Israel groups.

Journalist Dan Cohen, who attended the Zionist Organization of America gala on Sunday night, reported that the host described Trump's election as a kind of divine intervention. The host also called for stopping "radical barbaric Islamic savages," and was met with applause from the audience, according to Cohen.

Other major pro-Israel groups, like the American Israel Public Affairs Committee and the American Jewish Committee, have remained largely silent about the racism and anti-Semitism of the Trump camp and the far right.

Prominent pro-Israel figures like Alan Dershowitz have actively defended Bannon from accusations of anti-Semitism, while simultaneously accusing critics of the Israeli government and even the Movement for Black Lives of anti-Semitism.

Dershowitz spoke at the Zionist Organization of America gala, in fact. Cohen reported that Dershowitz warned about the rise of neo-fascist and other far-right movements in Europe, but insisted that the real threat is the Black Lives Matter movement.

Most of the far-right movements in Europe are very pro-Israel. Many see the Israeli government as a model for the racist ethnostates they seek to create. Far-right groups also see Israel as an ally against Muslims.

On the other side, progressive peace and social justice groups like Jewish Voice for Peace have been very outspoken in their opposition to the Trump camp. Jewish Voice for Peace launched the website StopBannon.org and its petition calling for Bannon to be fired has gotten more than 35,000 signatures, along with endorsements from a variety of civil, legal and immigrants' rights organizations.

The groups say their protests will continue. The demonstration on Sunday night was the latest event in a growing campaign against Bannon's appointment. On Thursday, IfNotNow activists held another surprise demonstration inside the Trump transition team's offices in Washington, D.C. More of such protests are planned for the future.