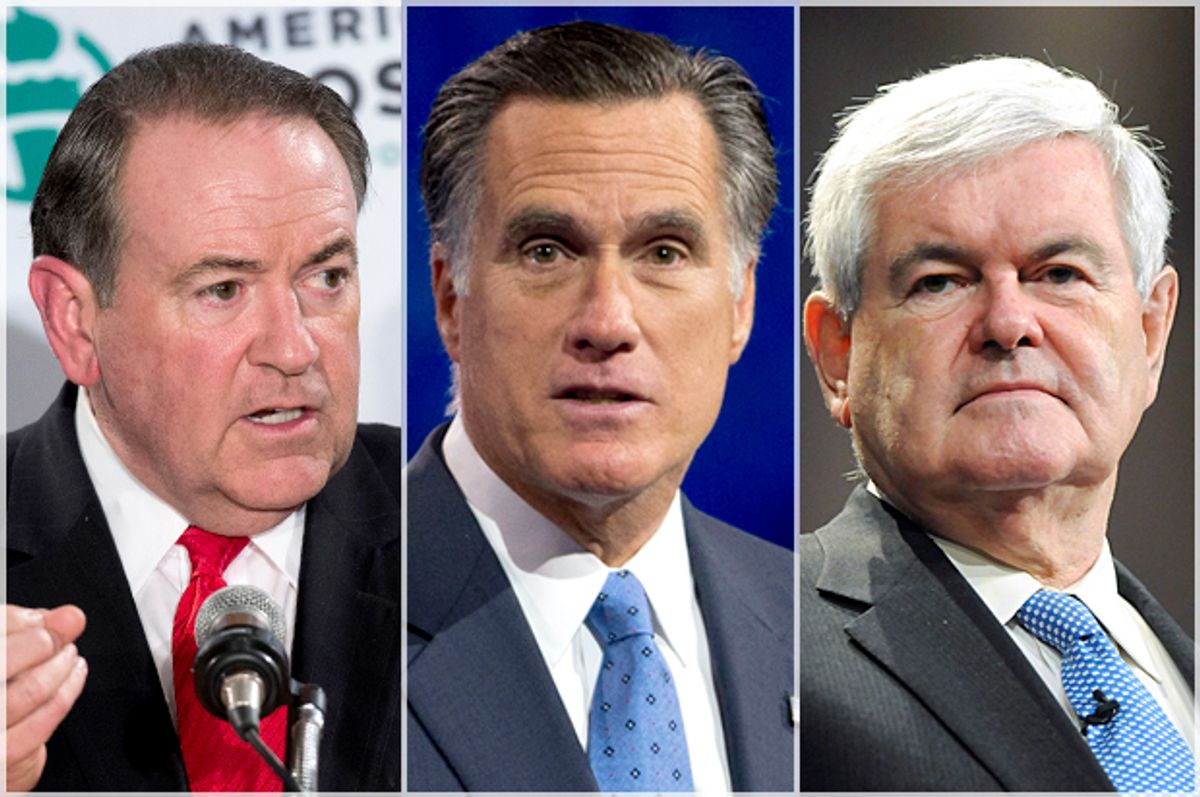 Newt Gingrich and Mike Huckabee, two conservatives who hopped on the Donald Trump train early, don't like the idea of having Mitt Romney be secretary of state.

During an interview with Fox News's Tucker Carlson on Tuesday evening, Gingrich pointed out that "Romney wanted to be in President-elect Trump's job, and to what degree would Romney, once he became secretary of state, represent himself?" He added that he didn't think the 2012 Republican nominee would put "America first."

After taking a swipe at Secretary of State John Kerry by questioning whether Romney would follow his predecessor's lead of going from "five-star hotel to five-star hotel, having nice gourmet dinners with foreign ministers," Gingrich argued that "Trump has to have somebody at state who is very tough and very willing to take on foreign leaders and say, Wait a second, I'm here to represent the United States of America."

Thus Gingrich said he found himself asking about Romney, "To what extent would he actually represent the kind of tough-minded 'America first' policies that Trump has campaigned on?"

Gingrich promised to support Romney's nomination if Trump selects him, adding, however, that he "can think of 20 other people who would be more naturally compatible with the Trump vision of foreign policy."

This isn't the first time that Gingrich has had unkind things to say about Romney. (The two men developed a notorious hostility for each other during the 2012 election, when they competed in the Republican presidential primaries.) Other knocks have included accusing Romney of "pious baloney" and describing him as "some guy who has Swiss bank accounts, Cayman Island accounts, owns shares of Goldman Sachs while it forecloses on Florida and is himself a stockholder in Freddie Mae and Freddie Mac."

Gingrich also challenged Romney to "tell us how much money he's made off of how many households that have been foreclosed by his investments." And ironically enough Gingrich criticized Romney's immigration reform plan on the grounds that it "shows no concern for the humanity of people who are already here."

Although he's not as close to the president-elect as Gingrich, former Arkansas Gov. Mike Huckabee also had some choice words about Romney.

"It would be a real insult to all those Donald Trump voters who worked really hard," Huckabee told "Fox & Friends" on Wednesday. "When you go after a person who is the nominee of your party, who has been duly nominated by the voters . . . you're savaging the voters. You're not just savaging Donald Trump."

Huckabee referenced Romney's speech in Salt Lake City earlier this year, in which Romney "said Donald Trump wasn't fit, that he lacked character — I mean, on and on," according to Huckabee.

"It's not about that I don't care for Mitt personally. But I'm still very unhappy that Mitt did everything he could to derail Donald Trump," Huckabee claimed. "He didn't just go after him from the standpoint of, I disagree with his policy on immigration, I disagree with his policy on taxes. He attacked him on a personal level about his character, integrity, his honor."