Is your family dysfunctional, just not in a funny way? The 10 best family comedies 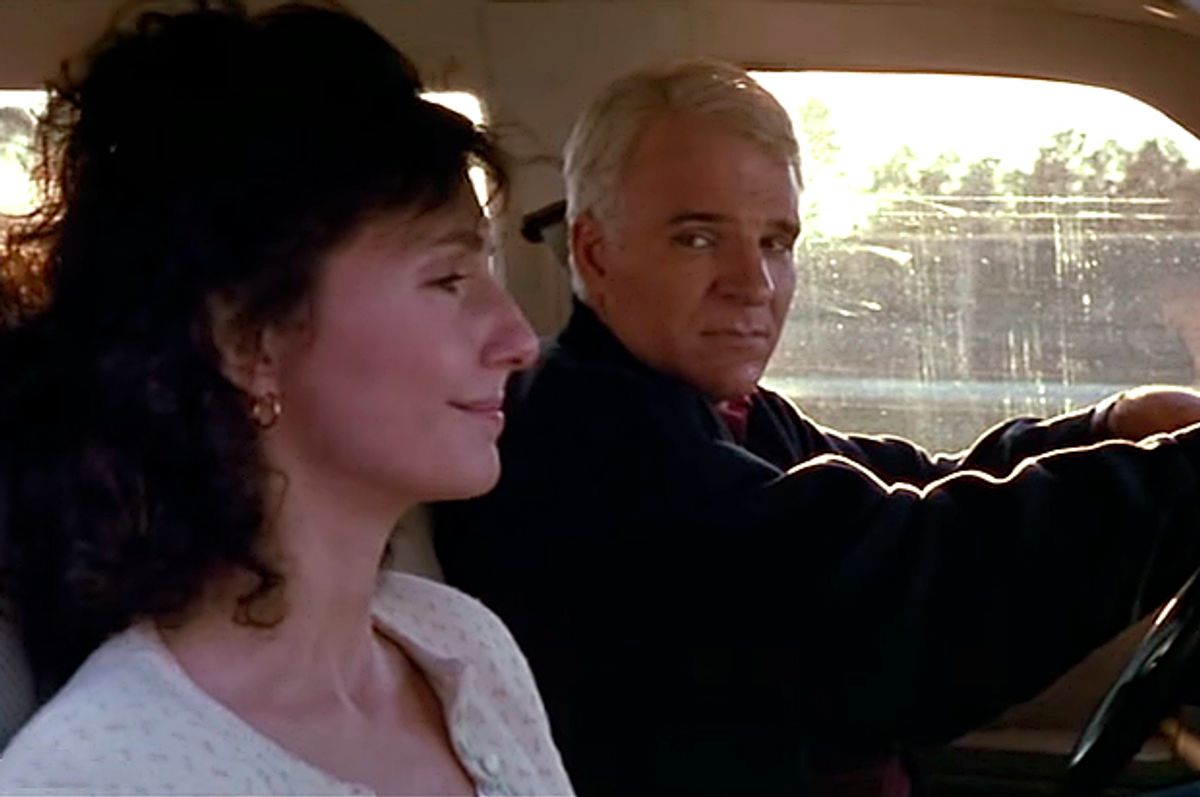 Ah, the holiday are upon us, and so too, are forced family gatherings. Movies often show extreme examples of how the ties that bind sometimes strangle. The best family comedies put the fun in dysfunctional as characters have their patience tested — often by the folks who can push their buttons best. Here are ten memorable and darkly funny flicks.

Poor April (Katie Holmes) is the black sheep of her clan, a tattooed hipster living in downtown New York. She wants to make what may be the last Thanksgiving dinner for her dysfunctional family — long-suffering dad (Oliver Platt), siblings Beth (Allison Pill) and Timmy (John Gallagher, Jr.), and her mom Joy (Patricia Clarkson), who is dying of cancer. April may sense her family members are dreading dinner together, but she becomes even more anxious about hosting when her stove breaks. As she tries to solve her problem by finding a neighbor who can help her cook a turkey, she learns how to relate to other people, which may help her bond with her family. However, “Pieces of April” is more caustic than comforting; as with all good black comedies, things never quite go as planned, and the reversals of fortune, such as April’s tetchy exchanges with a touchy neighbor (Sean Hayes), are quite funny. Filled with acerbic one-liners — Clarkson, Oscar nominated for her work here, is especially snarky — this dysfunctional family dinner film is delicious because it presents how people and families truly are, and it is never entirely heartwarming.

When the adopted Mel Coplin (Ben Stiller) is pressured to name his 4-month old baby, he goes off to find his birth parents, a decision which upsets the high-strung couple who raised him, Pearl (Mary Tyler Moore) and Ed (George Segal). Taking his wife Nancy (Patricia Arquette), their baby, and an adoption agent/grad student, Tina (Téa Leoni), on a madcap road trip, Mel and his entourage have an awkward visit to a Reagan-loving southern woman (Celia Weston) and her twin volleyball-playing daughters, and an even more awkward encounter with the counter-culture, LSD-making Schlicting family (Lily Tomlin, Alan Alda, and Glenn Fitzgerald). “Flirting with Disaster” offers non-stop laughter from tiny zingers like Arquette’s deadpan line about frotteurism, to a hilarious subplot involving Agent Tony Kent (Josh Brolin), and his partner (Richard Jenkins). The film’s disarming humor plays with issues of family and identity and the Jewish-guilt lines are pricelessly funny. Writer/director David O. Russell’s black comic farce is as brilliant as it is hysterically funny.

Who says lesbian moms can’t be great parents? In Lisa Cholodenko’s Oscar-nominated comedy, Moms Nic (Annette Bening) and Jules (Julianne Moore) have done a great job raising Joni (Mia Wasikowska) and Laser (Josh Hutcherson). But when the kids want to meet their biological father, Paul (Mark Ruffalo), all hell breaks loose. The amusement stems from how Paul, suddenly and unexpectedly inserted into a functional if non-traditional family, upsets the delicate balance by having an affair with Jules even as he connects with Joni and Laser and briefly, Nic. This is a smart, modern comedy for our times.

If “Death at a Funeral” was a broad family farce, this bereavement comedy has a little more heart. Set during an imposed week of sitting Shiva, Judd Altman (Jason Bateman), reeling from the breakup of his marriage, must contend with his father’s passing and a series of additional frustrations including a bed in the basement that doesn’t completely unfold, As his siblings (Tina Fey, Corey Stoll, and Adam Driver) along with their lovers and others pile on Judd’s problems with their problems, secrets and lies are revealed and the healing can finally begin. Jane Fonda is particularly diverting as the kids’ over-sharing mom.

This killer John Waters comedy, has picture-perfect mom Beverly Sutphin (Kathleen Turner) harboring a dark secret. She has clear expectations for her children Chip (Matthew Lillard) and Misty (Ricki Lake), like not saying the “brown word.” And she takes a stand against improprieties — admonishing folks about chewing gum, rewinding VHS tapes, buckling their seatbelts, or wearing white after Labor Day. However, she is guilty of harassing her neighbor Dottie Hinkle (Mink Stole) with obscene phone calls, and, oh yeah, being a serial killer.

But despite having “problems,” her family still loves her “no matter what she is.” The humor in “Serial Mom” as black as the violence, but a scene with a speared liver is as funny as it is gross.

A suburban satire, pitch black comedy, and a creepy horror film rolled into one, “Parents,” set in the 1950s, features perfect-seeming mom and dad (Randy Quaid and Mary Beth Hurt) who are in fact, cannibals. Told from the perspective of their insecure young son Michael (Bryan Madorsky), who does not trust adults, this overlooked gem considers what to do with the “leftovers.” As big bloody pieces of meat are plated each night, Michael is prompted to ask, “left over from what?” Stylishly filmed, impeccably acted, and darkly funny, viewers should seek “Parents” out, even if they also consider vegetarianism in the process. Maybe not the best film to watch over Thanksgiving — or is it?

Possibly the weirdest, blackest, dysfunctional family comedy ever, this Greek import by Yorgos Lanthimos, the director of this year’s hit “The Lobster,” slowly reveals the strange conditions imposed upon a suburban family. With specifically-designed language, a strange sexual arrangement for the young adult children with an outsider, bizarre games, and a hilarious dance sequence, “Dogtooth” may confuse viewers at first, but this penetrating satire about “family values,” delivers a wallop that will induce both gasps and guffaws.

Looking for something more traditional and Hollywood? Ron Howard’s beloved, affecting comedy (which spawned a beloved, affecting TV show) features Steve Martin and Mary Steenburgen as long-suffering parents in a four-generation family. Their three kids are a handful, but so are his father (Jason Robards) and three siblings (Tom Hulce, Diane Wiest, and Harley Kozak). “Parenthood” navigates all the joys and aggravations of family, from sex and competition to love and reconciliation. And arguably, the most truthful moment is a scene where Martin searches for his kid’s lost retainer in a trash can. “Parenthood” may not be as dark, dysfunctional comedy as some of the films on this list, but what makes it universal is that everyone can identify with someone in the film.

Mike Nichols’ classic film about suburban angst and ennui has Benjamin (Dustin Hoffman) returning home after college wondering what to do with his life. Drifting through life, he is seduced by family friend Mrs. Robinson (Anne Bancroft) and also starts dating her daughter Elaine (Katherine Ross).  While Benjamin is accused of making half-baked decisions, he tells his father, “No…it’s completely baked.” The film, a milestone in its day, turns 50(!) next year, and the Simon and Garfunkel soundtrack, the funny-awkward pauses and silences, as well as the terrific one-liners — “Plastics.” — still hold up.

There are many great films about three sad sisters (among them Todd Solondz’ “Happiness” and the underappreciated “Playing By Heart”) but Woody Allen’s masterpiece about Hannah (Mia Farrow), Holly (Diane Wiest) and Lee (Barbara Hershey) is arguably the best. Bookended by two Thanksgiving dinners, Allen’s film chronicles the ups and down in the relationships between siblings getting family rhythms and rivalries right. The film’s theme about life being precious and to savor its pleasures comes through as Hannah and her sisters have affairs and act badly towards— but genuinely love — one another.