Prefer to watch movies about football rather than football this Thanksgiving? These are 10 of the best

The audience for America's game might be down around a staggering 10 percent this year, but these 10 movies rule 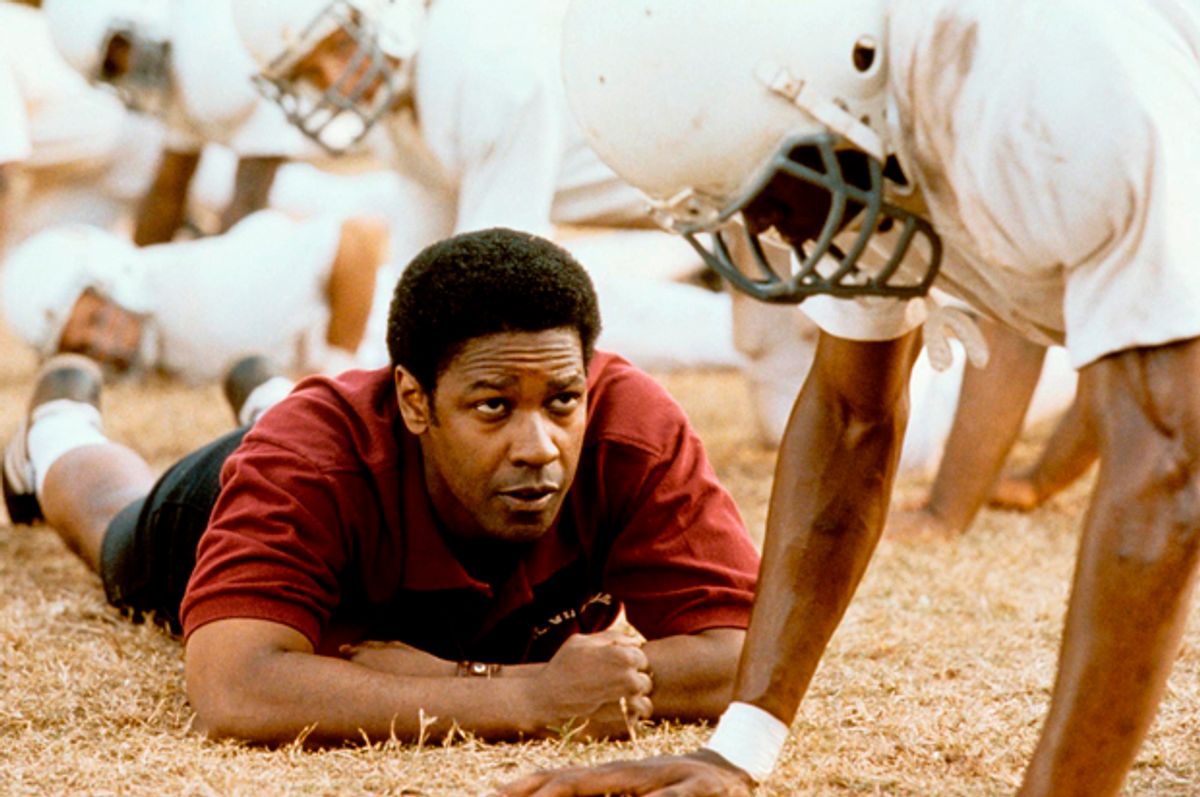 Don’t care to watch football while the turkey’s cooking (or after the big meal)? Maybe you need to brush up on the game? Here are 10 football-themed films for non-football fans to watch this holiday season.

Sandra Bullock delivers an Oscar-winning performance as Leigh Anne Tuohy in this true story about Michael Oher (Quinton Aaron), a homeless teen who is taken in by the Tuohys, with whom he soon starts to thrive. As a stand-in mom, Leigh Anne encourages him to play football and teaches him, during a notable practice session, that his team is his family and he has to protect them and his blind side.

Thanks to Leigh Anne, Michael develops self-confidence and has success on the field; he eventually becomes an NFL first round draft pick. In return, Michael has an impact on the family, teaching its members to care more about others, especially during Thanksgiving, Sitting alone at the dining room table, on the day when food and football rule, Michael motivates Leigh Anne to turn off the game and have the family eat together. “The Blind Side” may be a “white savior” film, and the film’s heartfelt inspiration is pure pablum, but Bullock’s steeliness is infectious.

One of the most heart-tugging documentaries this year, “Gleason” chronicles the life of New Orleans Saints’ safety Steve Gleason, who says he wants to give his newborn son “as much of myself as I possibly can while I can.” When he finds out he has Lou Gehrig's disease (also called amyotrophic lateral sclerosis or ALS), he starts recording his thoughts and advice for his unborn son as well as his feelings of helplessness as his condition worsens and he has difficulties with speech and mobility.

Gleason’s nine-year career in the NFL is briefly addressed, as is his career-defining play, blocking a punt. But what emerges from this remarkable documentary is not just Gleason’s positive attitude and courage, but his determination to raise awareness (and funding) for ALS. Equally moving is the overwhelming love he has for his saintly wife, Michel, and their son, Rivers. “Gleason” also navigates Steve’s uneasy relationship with his religious father. The film is sentimental at times, but that in no way diminishes its power.

Oliver Stone’s epic sports drama has (fictional) Miami Sharks coach Tony D’Amato (Al Pacino), trying to put his team back together after injuries sideline two quarterbacks. His third-stringer, Willie Beamen (Jamie Foxx), doesn’t start out promisingly. But after he changes some plays in the huddle, and leads the team to some victories, he becomes a superstar.

Of course, Tony and Willie don’t see eye to eye, which is part of the film’s fun — as is the fact that Tony also does not get along with the team’s owner, Christina Pagniacci (Cameron Diaz). Will Tony and Willie stay with the team? Shouty Al (reuniting with Stone, who wrote “Scarface”) is as characteristically overstated as Stone’s critique of the business of football. (Fun fact: The NFL didn’t let Stone use a real team). Regardless of the politics, the bone-crunching sports violence and gratuitous locker-room nudity make “Any Given Sunday” entertaining as hell.

The emphasis in “Varsity Blues” is less on the gridiron and more on partying and the film’s famous “whip cream bikini” scene, but the film does score points for addressing the dangers of cortisone shots and how sons want to take a different path than their fathers in a place where “football is a religion.”

Taking the 1987 football strike as inspiration, this irreverent comedy has a team of ordinary misfits becoming Washington Sentinel football players for coach Gene Hackman (wasted). It’s a comedy of errors, not just because Keanu Reeves doesn’t really cut it as a quarterback but because the filmmakers think humor is a contact sport.

So heavyweight players literally pick up and move a badly parked car or a bar fight breaks out and the motley crew of players dance to “I Will Survive” in a jail cell. While “The Replacements” makes most football fans cringe, the film does have its admirers.

Never let the truth get in the way of a good story, right? This Disney production takes some liberties with the actual story of regular guy Vince Papale (Mark Wahlberg) who played for the Philadelphia Eagles rom 1976 to 1978, but the film’s good intentions don’t hurt this rousing biopic. (Director Ericson Core does have a penchant for using slow motion for added emotional button pushing).

When Vince is encouraged to attend open tryouts for the Eagles, he catches the attention of coach Dick Vermeil (Greg Kinnear) and is picked for the team. Sure, Vince has his self-doubts — he vomits before his first game — but he does well on the field in the climactic game ('natch,though reality was a little different). This modest film is a nice “Philadelphia” story about a little guy who made it to the big time.

Want to see a grown man cry? Just put on this acclaimed TV movie about Brian Piccolo (James Caan) and his friendship with Gale Sayers (Billy Dee Williams). The athletes, who play for the Chicago Bears, are rivals who become roommates and before long fast friends. They display the true meaning of teamwork: They break down racial barriers and they are there for each other on the field and off.

Piccolo helps Sayers become more confident as a person; Sayers help Piccolo become more confident as a player. But when Piccolo receives a diagnosis of cancer, Sayers advocates for his friend, even donating blood. Set in the world of football, this film is a heartfelt tribute to the love and respect these two men had for each other. “Brian’s Song” remains a classic for that reason — and because it makes grown men cry.

The tagline for this seriocomic look at the Dallas Cowboys (renamed the Bulls in the film) was “Wait till you see the weird part.” For football fans, what was weird was seeing country singer Mac Davis (in his acting debut) as a quarterback.

Nick Nolte, however, scores giving a flinty performance as Phil Elliott, an aging, cynical wide receiver hanging on to his career and his sanity. He pops pills to get through the physical pain of the game, but he also has emotional battles with the coaches and owners and is benched for his attitude. “North Dallas Forty” captures the authenticity of football and the differences between the players who see it as a game and the staffers who see it as a business. The film’s behind-the-scenes look at football makes it far more notable than all the weird stuff that happens at the parties the teammates attend.

Burt Reynolds, who played football at Florida State, stars as Paul Crewe, a former NFL star (disgraced in a point-shaving scandal) who is sent to prison after stealing his girlfriend’s car and punching a cop. The warden, Hazen (Eddie Albert), is a football fan, so he sets up a deal: Crewe can have an easy life in jail if he agrees to coach the prison’s semipro team. Crewe declines.

Extended an offer of early parole, Crewe is asked to set a game between the prisoners and the guards. He reluctantly agrees. But there are more deals to be made —  such as Hazen moves the goalposts telling Crewe to let the guards win. “The Longest Yard” mixes comedy and action as the Big Game plays out (with a lengthy, action-packed sequence), and director Robert Aldrich used real players on the teams, including Sonny Sixkiller as a Native American playing for the prisoners and the hulking Ray Nitschke as Bogdanski, one of the meanest (and meanest looking) guards. The outcome is highly satisfying, unlike the 2005 Adam Sandler remake.

Based on a true story, this is an inspirational drama about teamwork and racial accord in 1971. Herman Boone (Denzel Washington) is hired as the coach for the Alexandria, Virginia, high school team, the Titans, in a bid to unite the black and white communities as the schools become integrated. Boone’s style is to be tough and fair — and he is — helping the players to realize their full potential by working together. His efforts also enlighten coach Bill Yoast (Will Patton) who slowly comes to appreciate Boone’s style as well as understand the racism he experiences on a regular basis.

But as far as its preachy lessons go, “Remember the Titans” is best when Boone gives pep talks to his team, on the hallowed grounds of Gettysburg (after a 3 a.m. run) or in a rousing locker-room speech before the athletes play an all-white team. Washington’s performance pushes the film over the goal line, and that is why fans remember “Remember the Titans.”