It can happen here: But has it? The 1933 scenario is no longer hypothetical

None of us could stop Donald Trump, and comparisons to 1933 no longer seem ludicrous. What do we do now? 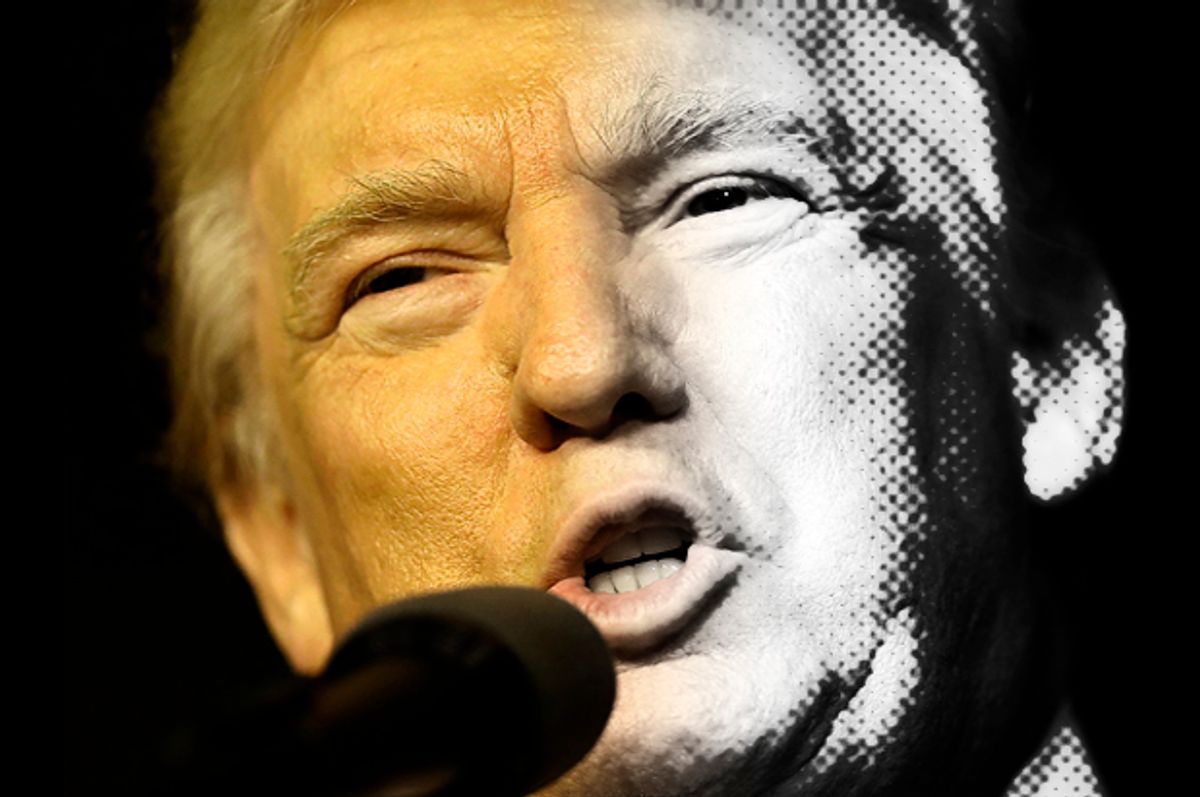 We have crossed the river of history into a new country, and there’s no way back. Now we are stumbling around amid the gathering darkness, trying to figure out whether anything in this alien landscape is recognizable. Will the presidency of Donald Trump — an eventuality unforeseen by anyone, including the man himself — resemble things that have happened before? Or is it a trip to an unknown planet, where all the things we thought we understood about reality and democracy and the nature of America no longer apply?

Karl Marx’s famous maxim that history repeats itself, the first time as tragedy and the second time as farce, has itself been repeated too often, both in contexts where it fits and ones where it doesn’t. This time around, we damn well better hope it’s true. Farce, failure and incompetence are among the better possible outcomes of a Trump administration. The worse outcomes — more clearly in focus with every noxious new appointment and every new report of a hate crime that the president-elect hasn’t heard about or blandly disavows — are almost too much to think about.

It’s time to think about them. Those worst-case scenarios have been nestled in their eggs feeding on ignorance and hatred for a long time, like the face-huggers of “Alien.” Now they’re hatching, and they’re hungry.

It’s bad: The chain of names both august and obscure that begins with George Washington and John Adams will now and forever include the inexplicable human skid mark of Donald Trump, 2017 till whenever. As David Remnick wrote in this week’s New Yorker (in an article with a title similar to this one’s), he felt a moment of cognitive dissonance while watching President Barack Obama laying a wreath on the Tomb of the Unknown Soldier shortly after the election:

[In] the coming year it would be Trump, formerly of Trump Taj Mahal, at the Tomb of the Unknown Soldier. Donald Trump, formerly the host of “Celebrity Apprentice” and the owner of Trump University, in the Situation Room. At 10 Downing Street. At the Élysée Palace. At the Gate of Heavenly Peace.

It’s bad, but the badness goes well beyond vulgarity, greed and bad hair. (I’m not suggesting that Remnick cares only about those things.) We don’t know whether the Trump election marks a fatal tipping point for the American experiment in popular self-government, which, as Abraham Lincoln observed seven score and 13 years ago on a famous battlefield, has always been deeply flawed yet informed by unquenchable idealism.

But history demands that we take that possibility seriously. Indeed, I think we have to behave as if it were true — as if our democracy has been irreparably damaged and now must be renewed and rebuilt, pretty much from scratch — because that may be the only way of preventing it from coming true.

We don’t know whether the election of Trump is an American echo of the winter of 1932-33 in Germany, when a fragile democracy collapsed into tyranny and an infamous demagogue rose to power on a promise of economic renewal and restored national pride, with an unmistakable racial subtext. It’s an inflated comparison in many ways: Trump is too lazy and stupid to be a good Führer and lacks any semblance of a consistent ideology; his true believers are nowhere near a majority and are unlikely to participate in any form of mass mobilization that involves leaving the sofa. Kristallnacht is more likely to come back as a hashtag than a physical event. But if you’re anything like me, the parallels seem far-fetched first thing in the morning and way too plausible in the middle of the night.

At the very least the Trump election is a moment of unprecedented national emergency and a critical symptom of how badly American political life has decayed. The whole scenario remains deeply ludicrous, although it long ago stopped being funny. It more closely resembles a plot twist in an Alan Moore graphic novel than anything any of us expected to see in the real world: A reality TV star and real estate salesman with the demeanor and intellect of a petulant child has been elected president with a minority of the vote, thanks to a flukey electoral system, a severely divided and demoralized electorate, a beleaguered and overconfident opponent and a concatenation of other circumstances too strange for fiction.

Hillary Clinton's lead in the popular vote is now more than 2.1 million votes, in itself a radical departure from anything that has ever happened before in American history. Al Gore's popular-vote margin over George W. Bush, in the only similar recent case, was less than one-fourth that size. But consider the intense division of our country another way: Subtract California from the United States and Trump wins by more than 1.6 million votes. Subtract Illinois, Massachusetts and New York as well, and Trump wins by about 5 million.

That’s before we get to all the vile things that Trump has said and done to galvanize the most ignorant and jingoistic tendencies in the American public, and the incoherent or vile list of things he has said he will do in the future. Those are also aspects of the emergency. Then there’s the fact that President-elect Trump has so far served as a channel for the most retrograde elements of the hard right: He has tapped an old-line white Southerner with clear links to Jim Crow-style racism for his attorney general (Jeff Sessions), a defrocked general given to paranoid anti-Islamic tirades as his national security adviser (Michael Flynn) and a millionaire zealot who wants to defund public schools as his secretary of education (Betsy DeVos).

Never mind the “alt-right,” an increasingly meaningless term that describes a basket of miscellaneous deplorables. Vice President-elect Mike Pence or adviser Steve Bannon or whoever is orchestrating things behind the scenes is installing a right-wing dream team that would have been too extreme for former vice president Dick Cheney.

Those who try to assure us that the emergency is not an emergency or to insist that the enduring institutions of democracy will surely triumph over this mass hallucination, are either cowardly or stupid or have their heads buried somewhere that isn’t the sand. Furthermore, they are steadfastly refusing to learn anything from recent experience: Aren’t these the same responsible grown-ups who understood how things worked in the real world and who felt sure that Jeb Bush would be the Republican nominee and then that Hillary Clinton would win the election in a historic landslide? At some point, clinging to your broken idols while barbarians ransack the temple just becomes pathetic.

If you had to guess right now, consider who will be remembered as displaying courage and who as a disgraceful chicken shit? Outgoing Senate minority leader Harry Reid, who has excoriated Trump for his hateful and divisive campaign and urged his fellow Democrats to deny the president-elect any political legitimacy until he earns it? Or Sen. Joe Manchin, a conservative Democrat from West Virginia — a state Trump carried overwhelmingly — who called Reid a disgrace to the party and the nation?

Will it be those members of the panel of New York Times editors and staffers who fell over themselves congratulating Trump for not breathing fire or eating babies after he finally deigned to meet with them? (Add this to the list of things Thomas Friedman will wish he'd never said: "I came here thinking you’d be awed and overwhelmed by this job, but I feel like you are getting very comfortable with it.") Or will it be columnist Charles Blow, who could barely conceal his disgust at the craven conduct of his bosses?

No one can live in outrage and denial all the time. We all have to deal with the altered universe in which Donald Trump sits in the Oval Office as a somewhat legitimate president, even if such a universe makes that office and our entire country look like a bad joke. Resistance and renewal and rebuilding will take many forms — and will take a long time. They may not work; the damage is significant. We will have to get past seeking a unitary explanation for what went wrong: It wasn’t the fault of the Russians or racist white people or identity politics or Hillary Clinton or the Electoral College or the Republican Party. (OK, it was some of those things, and a lot of it was the Republican Party. But even that is a long and complicated story.)

It took years for American politics to deteriorate badly enough that Donald Trump could be elected dogcatcher, let alone president. There’s plenty of blame to go around. None of us did enough to stop it from happening quite obviously. So now we confront a national emergency that must not be denied and an old question out of the history textbooks that cannot be avoided: Whose side are you on?