Faking it: Does the forged Vermeer that fooled Goering belong in a museum?

Han van Meegeren was arrested after WWII for selling his "Vermeer" to a Nazi. Should we collect his knock-offs now? 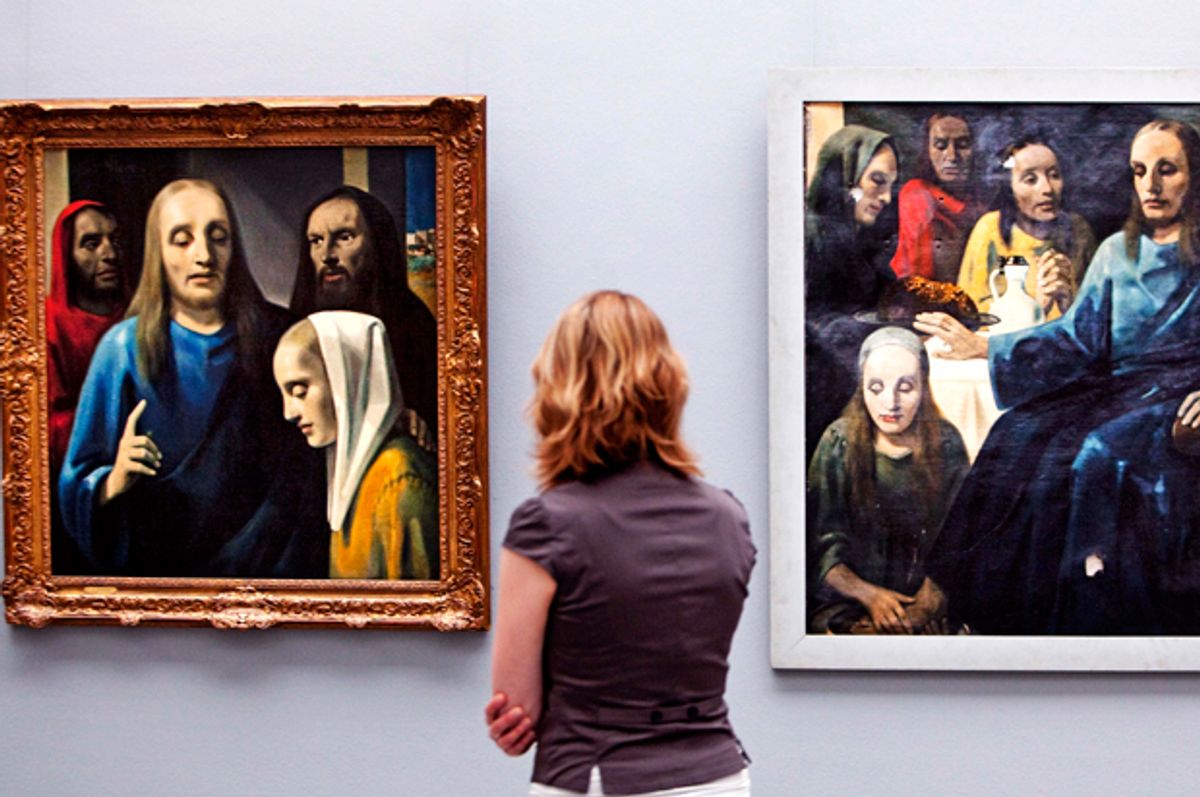 There ain’t no way that’s a Caravaggio.

Let me pause and leave you with that thought, before we circle back to it.

So there I was this weekend, in the small Dutch town of Deventer for my best friend’s wedding. I walked past the enormous former cathedral, stripped to the bricks during the Reformation, en route to complete task number 1 in my duty as best man: buying a postcard and a pen. (I had it pretty easy compared to when my buddy was best man at my wedding, in which he was obliged to chop a tree stump in half with an axe, saw a log in two, shave bark off a pine tree, load hay onto a cart with a wooden pitchfork and then barter with the locals to buy my wife.) That’s when I passed a sign at the town’s museum: Een Echte van Meegeren. “An Original Van Meegeren.” What were the chances? My last book was an illustrated history of forgery, prominently featuring Han van Meegeren, Dutch art forger extraordinaire, and there happens to be a special exhibit of his forgeries a few paces from where my friend is about to get hitched? In I went.

And here’s the thing. Van Meegeren’s paintings may look nothing whatsoever like the work of Vermeer, and it remains extraordinary that the world’s leading specialists were so convinced that Van Meegeren’s forgeries were Vermeer originals — but they are extremely beautiful. They also fulfill Aristotle’s definition of what makes for great art: His paintings are good (they exhibit skill), they are beautiful (a subjective opinion, but a legitimate one) and they are interesting. Interesting not because they are some revolutionary new interpretation of art, but because of the story they embody, possibly the most dramatic of all known forgery cases. Van Meegeren was arrested after the Second World War for having sold Dutch cultural heritage (a Vermeer painting) to the enemy (Herman Göring, head of the Luftwaffe and a ravenous stolen art collector). This was considered high treason and, if found guilty, van Meegeren could have been executed. Oops. He rather frantically tried to explain his “recipe” for forging a Vermeer, but was not believed until he actually painted another one while incarcerated.

Looking at Van Meegeren’s paintings in person for the first time, I was struck by the thought: I’d love to own this.

I would love to be a forgery collector. The problem with forgeries is the whole being-duped thing. Buyers don’t want to feel that they’ve had the wool (expensively) pulled over their eyes. If you think you’ve bought a Tesla, paid Tesla prices, and it turned out that someone stuck a Tesla chassis on a Renault Zoe, you’d be pretty pissed. Same deal (but think in the millions rather than the tens of thousands), and you’ll understand the reaction of buyers who might have thought they were acquiring a Vermeer (worth tens of millions) but actually have a Van Meegeren (worth perhaps in the mid-five figures, largely because of the story behind his crime). But what if you know that it’s a Van Meegeren forgery of a Vermeer? Stripped of the fraud component, what you have is an extremely skillfully executed painting, beautiful and with a heck of an interesting story behind it. It becomes a relic of the story in which it featured, but it can also be admired for its aesthetic value.

Forgery stories pop up all the time. In recent months, suspicion has floated that there is a previously unknown master forger of Old Master paintings (or ring of cooperating forgers) whose works are bobbing to the surface. Extremely good, expert-fooling forgeries have been spotted only with great difficulty: a painting by Lucas Cranach, a Franz Hals, a stunning Orazio Gentileschi. Add to this the Caravaggio I mentioned at the start of this essay, supposedly found in a family’s attic in Toulouse. This makes for at least four extremely convincing works that divide scholars. A handful still contend that each is authentic (or at least that evidence has yet to be made public that proves otherwise). Others argue that these are recently-made forgeries. Then there is the third option: that they are copies after original works, made not with fraud in mind (and therefore not a proper forgery), but later misattributed as an original.

The idea that there is a “ring of forgers” is probably the least likely option, especially considering the works in question are skillfully executed, naturalistic works. One of only a few known proper forgery rings was in Siena in the 1930s, built up around Icilio Federico Joni, who specialized, along with his comrades, in Sienese Gothic altarpieces. But that is an outlier. Almost all known forgers have created alone (though many worked with others who functioned as front men and did the actual conning). There are some organized crime groups who dabble in forgery, but they tend to focus on far easier-to-produce, and often more valuable, modern works (like the Austrian/Slovenian gang just busted for trying to sell forged Picassos at 10 million Euros a pop). Abstract, minimalist work is artistically easier to produce than intricate, naturalistic paintings, but more than that, the materials are easier to get hold of (to resist forensic testing), and forgers do not have to replicate centuries of patina and craquelure if the work in question is only meant to be a few decades old.

So how do we know if these works are a) original, b) forgeries or c) copies that were misattributed as originals?

Forensic testing can only tell us so much. It can tell us the rough date that organic materials in a painting were made, and that’s pretty good. That should rule out a forgery, especially for Old Master works from the 16th or 17th centuries. But it can rarely guarantee authorship. Just because the Toulouse “Caravaggio” painting of Judith beheading Holofernes dates to circa 1610 does not make it a Caravaggio. Caravaggio’s work was so wildly popular that a wash of other artists sought to emulate his style (they are featured now in London’s National Gallery, at an exhibit called “Beyond Caravaggio.”) The original of this painting hangs in Rome at Palazzo Barberini, so this is necessarily either a copy by Caravaggio (and we have no historical record or precedence of him making an exact copy of one of his own paintings, as he altered them when asked to do multiple versions of a single subject, like his "David with the Head of Goliath" or "Supper at Emmaus" paintings), or a copy after Caravaggio. The latter is far more likely and, frankly, is what I thought immediately upon seeing a digital image of the Toulouse painting. It just doesn’t look good enough to be by Caravaggio himself. It looks like a solid, contemporary copy, likely by a 17th century painter who tried to learn Caravaggio’s best-selling style (which the artist fiercely guarded — he sued those who tried to ape him). It’s valuable. It’s interesting. I’d be delighted to have the work on my wall. But it ain’t no Caravaggio.

Which brings me to my point. Depending on the law of the country in question, some forged artworks proved as such in court must be destroyed (in France, for instance), a draconian move meant to make it impossible for forgers to profit from their crimes. Other nations keep forgeries for didactic purposes (Scotland Yard owns many wonderful forgeries from their successful investigations, and occasionally shows them in exhibitions) — when I taught a course on art crime at Yale, I was able to dip into recognized forgeries in the Yale Art Gallery’s storerooms and use them in hands-on seminars with my students. Forgeries should be noted as such, and it’s no good if they continue to fool people. Likewise, it probably is immoral, and should likely be illegal, for convicted forgers to profit from the sale of their art or image rights to them (this is why the blockbuster Scotland Yard exhibits at London’s V&A Museum never came with a catalogue — they would have had to pay the forgers for permission to use the images). But forgeries are beautiful, interesting, skillfully made objects that are a component of the history of art, culture and crime. As long as they no longer trick us, they are works that I, for one, would be delighted to collect.