Bannon is being dangerously normalized by The Boston Globe and New York Times, who call thia probing journalism 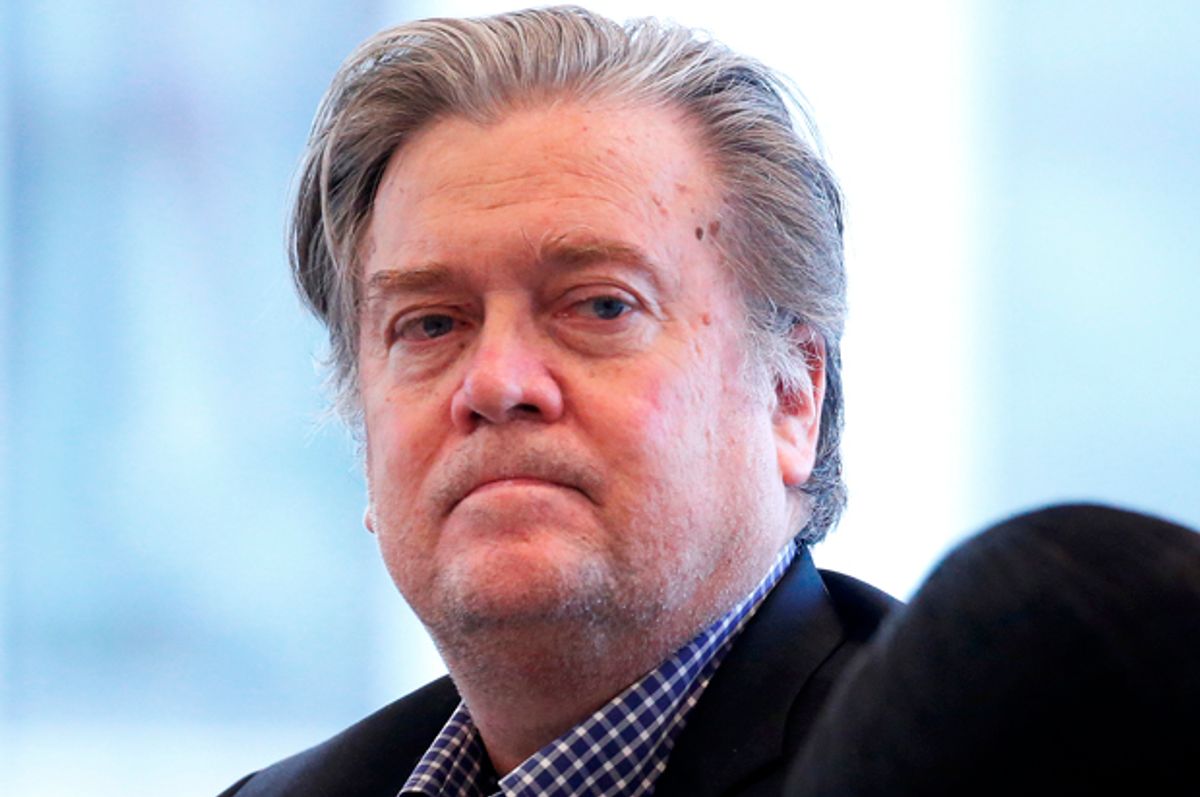 One of the challenges for the media in covering Donald Trump’s presidency — much like the challenge of covering his campaign — will lie in avoiding the normalization of his more outré policies and personnel appointments. This is no small task when almost everything the man says and does is calibrated for outrageousness and the destruction of long-held norms in politics.

Trump’s appointment of Steve Bannon, his campaign CEO and former head of Breitbart News, to the position of chief White House strategist and senior counselor two weeks ago presented an early test. Bannon may be an indispensable part of Trumpworld, but Breitbart’s years of catering to the neo-Nazis of the “alt-right” means a perceived champion of white supremacy would be working a few feet away from the most powerful office in the world.

The obvious implications of this set off howling from all corners of the political and media worlds, which subsided in less than a day when Trump started whining on Twitter about the popular vote. By the time the media had stopped gasping in shock about that, it was off chasing some new lie or possible horror of a Cabinet appointment.

The upshot is that anxiety about Bannon’s new job had subsided by the time profiles of the controversial executive started popping up in various outlets over Thanksgiving weekend. This gave the profile writers time to explore Bannon’s history and attempt to humanize him. The results do not give much faith to the idea that the news media is up to the unique challenge of covering the inner workings of the Trump administration.

The fundamentally flawed conceit here is that there is any public interest served in humanizing a man who, if not an outright racist of the sheet-and-hood-wearing sort, has profited in both financial and career terms through the promotion of vicious racism, misogyny, Islamophobia and anti-Semitism. And perhaps there is, so long as he is set to be one of the most powerful people in the nation for the next few years.

On the other hand, there is an almost institutional phobia to attaching words like “racist” or "white supremacist" to a person in Bannon’s position. Do that and you might be shamed by conservatives and even liberals who want you to “empathize” with the people who voted for Trump, not all of whom, you are told, are racists. This may be true, but they were certainly willing to tolerate a heck of a lot of racism when they cast their votes.

In terms of the media's recent profiling Bannon and seeking to understand him, this means not digging too deeply into the website he has run, in his own words, as a “platform for the alt-right” for the last few years. It means referring to Bannon’s white ethno-nationalism, reflected in Breitbart’s content, as a “dark, populist worldview.” It means digging up a cast of Bannon’s friends and loved ones to tell the reader, Why, there isn’t a racist bone in the man’s body!

Really, is anyone shocked to learn that Bannon’s siblings do not think he is a racist but are proud of how he has pulled himself up by his bootstraps from his humble blue-collar childhood? Is anyone surprised to find out that Bannon’s daughter is “nothing but proud” of him and disappointed to see him “tainted as something he’s not”? Does it throw anyone for a loop to learn that Bannon has a black friend, that his longtime executive assistant is an African-American woman?

No, nobody is shocked. But these factoids tell us nothing of value about the man, other than the unsurprising conclusion that human lives are messy.

What these profiles do is allow Bannon’s friends and loved ones to defend him without having to acknowledge the racist and misogynistic rhetoric and policies spouted by the candidate he attached himself to like a tongue-eating isopod. It lets his friends from Harvard Business School talk about how smart and ambitious he has always been without having to wrestle with the fact that their smart and ambitious buddy runs a major “news” site that has published stories glorifying the Confederate flag and its heritage.

It means his old writing partner defends him as not being racist or sexist but an opportunist, albeit one who has suggested restricting the right to vote to property owners but would consider exempting his African-American assistant because she’s like family to him, even while the majority of America’s black population would likely lose the franchise.

In the case of a profile published by Bannon’s hometown paper, the Richmond Times-Dispatch, it means allowing Bannon to deny that Breitbart has published stories that are “racially charged” and deflecting from the racism Trump pushed throughout the campaign by claiming that all the backlash against his appointment comes from liberals still “thunderstruck” by their loss. It enables Bannon to make the claim, apparently with a straight face that, according to the story’s headline, “Trump will condemn all forms of racism.”