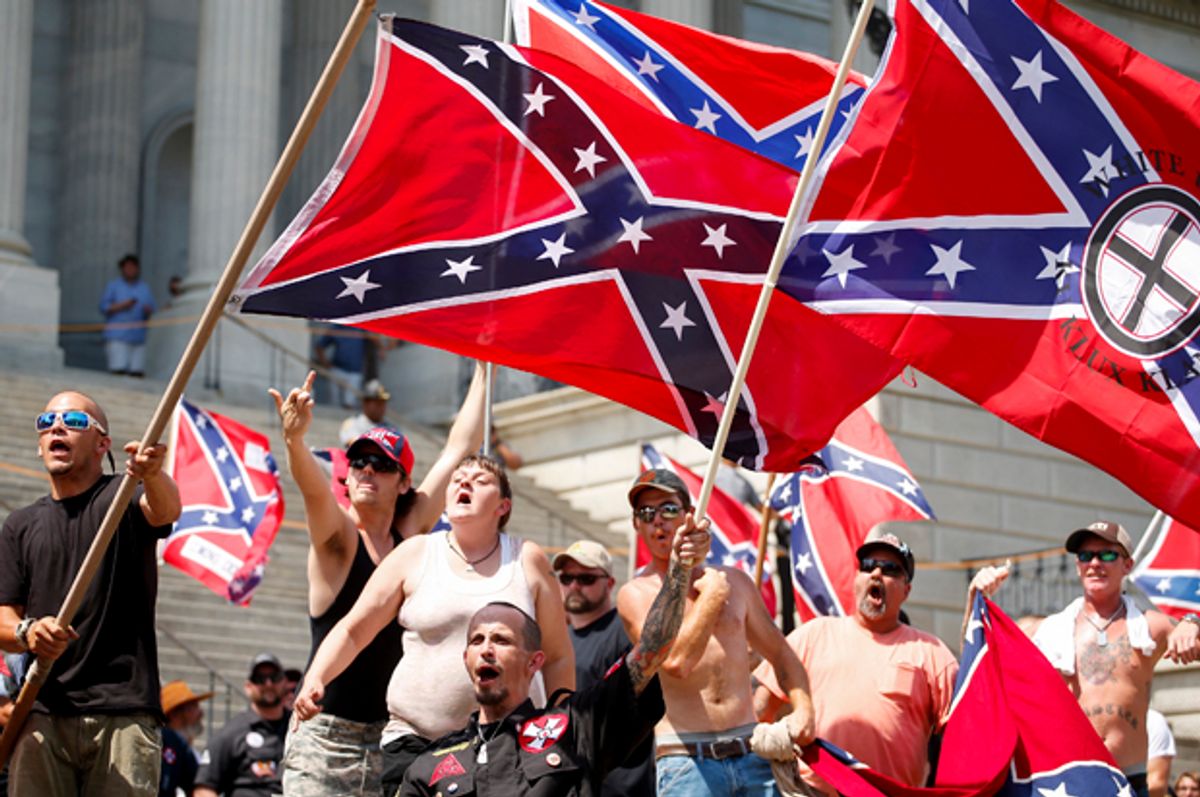 Democrats, liberals and progressives are still conducting a postmortem, trying to determine just why Hillary Clinton was defeated by Donald Trump. To that end, they have come up with several recurring questions: Did she and the Democrats focus too much on “identity politics?” Can Democrats win over “white working-class voters” and still be responsive to the concerns of people of color? Did Clinton and the Democrats’ discussions of racism and sexism alienate white voters? Was there too much of a focus on racism and sexism as opposed to economic anxiety?

Writing for Mother Jones, (the usually reliable) Kevin Drum ventured into this conversation over the weekend and how it relates to Bernie Sanders' comments about identity politics.  Sparking controversy on social media and elsewhere, Drum wrote in his “Let's Be Careful With the "White Supremacy" Label” that:

I was listening in on a listserv conversation the other day, and someone asked how and when it became fashionable to use the term "white supremacy" as a substitute for ordinary racism. Good question. I don't know the answer, but my guess is that it started with Ta-Nehisi Coates, who began using it frequently a little while ago. Anyone have a better idea?

For what it's worth, this is a terrible fad. With the exception of actual neo-Nazis and a few others, there isn't anyone in America who's trying to promote the idea that whites are inherently superior to blacks or Latinos. Conversely, there are loads of Americans who display signs of overt racism — or unconscious bias or racial insensitivity or resentment over loss of status — in varying degrees.

This isn't just pedantic. It matters. It's bad enough that liberals toss around charges of racism with more abandon than we should, but it's far worse if we start calling every sign of racial animus — big or small, accidental or deliberate — white supremacy. I can hardly imagine a better way of proving to the non-liberal community that we're all a bunch of out-of-touch nutbars who are going to label everyone and everything we don't like as racist.

In total, “Let's Be Careful With the 'White Supremacy' Label” is an example of piss poor analysis and argumentation. Drum’s errors are many and major.

White supremacy is a topic that demands serious care and attention. It is very difficult if not impossible in 500 or so words to distill down the hundreds if not thousands of books and articles that have been written on the topic. To attempt to do so, and thus write about white supremacy in a superficial manner, is at worst disingenuous and at best intellectually lazy.

Drum posed a question about the use of the term “white supremacy” — the answer to which is easily found with a minimum of effort. Of course, the application of the term "white supremacy" did not begin with Ta-Nehisi Coates. All Drum needed to do was to consider the readily available and much discussed work of freedom fighters such as W.E.B. Du Bois and Frederick Douglass. White supremacy and the color line are not riddles. But to properly begin to grapple with them requires actual work and scholarship — not flippant, quasi-informed opinion.

There are, in fact, millions of white Americans who believe that African-Americans are less intelligent, genetically more similar to beasts and animals than fully developed human beings and are more prone to violence and other anti-social behaviors than are other groups of people. This has been complemented by Michael Tesler’s work that convincingly shows how “old-fashioned” racism is resurgent in America and now has a direct impact on white voters’ political party affiliation.

Other research has also demonstrated that on a subconscious level that many whites associate images of black people with those of apes and other primates. This is a function of how white supremacy dehumanizes black people — a lesson deeply ingrained in the American psyche.

White supremacy is in no way a “fad”.  To the contrary, as historians and philosophers such as David Goldberg, Charles Mills, Nell Irvin Painter, Barbara Ramsby and many others have shown, white supremacy is one of the most powerful social, political, economic forces in modern history. I detailed this several years ago in a piece for Alternet:

Austerity, neoliberalism, globalization, and the culture of cruelty are some of the most powerful social forces in post-Civil Rights America. White supremacy does not exist separate or apart from those ideologies and practices. White supremacy involves, both in the present and historically, the systematic transfer of wealth, income, and other resources from non-whites to whites as a general group, and a white elite, in particular. There are many examples of this phenomenon.

However one parses the impact of “economic anxiety” and “racism” on the outcome, Donald Trump’s victory in the 2016 presidential election was a triumph for white supremacy. This is evident in the enthusiastic support Trump received from overt white supremacists such as the Ku Klux Klan and neo-Nazis, Trump's selection of Steven Bannon, a white nationalist, for a senior White House position and Jeff Sessions, a white racist, to be attorney general. To minimize the omnipresent power and threat of white supremacy at this moment is an act of capitulation — and one that imperils not just the safety and security of people of color but also America’s democratic institutions as well.

Drum is also concerned that the phrase "white supremacy" is somehow overused in our current political discourse and that the more word "racism" is usually more appropriate and accurate. Beyond his concerns about Bernie Sanders and "identity politics," Drum provides no substantive examples of this phenomenon. Moreover I would suggest that when the phrase "white supremacy" has been used (for example, by the Black Lives Matter movement to describe police thuggery, the dynamics surrounding the election of Donald Trump, wealth and race inequality or housing and educational segregation along the color line), such language is in many ways a corrective to a very generic and imprecise use of the word "racism." Why? because "white supremacy" more accurately captures how social systems and institutions reproduce white privilege and power.

Ultimately, Drum’s “Let's Be Careful With the 'White Supremacy' Label” is a worrisome example of the lessons about “identity politics” that the Democratic Party may take from the 2016 presidential election.

In the debate about “identity politics,” there is a problematic convergence on the extremes of the ideological spectrum. For conservatives and members of the right, identity politics is a way to demean and reject the struggles of people of color, women, gays and lesbians and other marginalized groups as somehow not being legitimate or “real” politics. By implication, only the concerns of white men over their maintaining power and affluence constitute real or “normal” politics. This logic is one of the most powerful examples of the social and political damage done by white male privilege in American society.

For many liberals and progressives, identity politics are seen as a distraction from the real politics of class and the struggle to reduce income and wealth inequality. Here, racism, sexism, homophobia and other types of social and political inequality are just masks and symptoms of a deeper problem — the way that capitalism exploits workers in the service of big business.

These two perspectives ignore how identity politics are actually part of full and equal civil rights. The concerns of African-Americans and other people of color about racism reflect how white supremacy and other types of systemic racial inequality are a threat to their (in many cases, literal) life chances. When women struggle to protect their reproductive rights, it is an acknowledgment of how control over one’s body is a necessary prerequisite for being equal to men in all ways social, political and economic. The demands for marriage equality by gays and lesbians is a claim on justice and how certain rights and privileges are exclusive to those people whose relationships are given legal standing by the state.

On a fundamental level, most political questions are about identity. As such, to mark identity politics as something unique, different or perhaps even aberrant is to both misunderstand and misrepresent the nature of politics itself. This is a failure of language that does an immense amount of political work in American society.

Kevin Drum closed “Let's Be Careful With the 'White Supremacy' Label” with the following suggestion:

Likewise, using a faddish term is not a sign of wokeness, no matter who started it. Let's keep calling out real racism whenever we need to, but let's save "white supremacy" for the people and institutions that really deserve it.

Those words will resonate with any person of color who has ever been lectured by a white person about the real meaning of "racism" or with women who have had to endure men explaining “sexism” to them.

Drum must face the realities of the current political terrain in America. The Republican Party is top-down, hierarchical, highly ideological, largely homogeneous and, on a de facto level, the United States’ largest white identity organization. By comparison, the Democratic Party is a diverse coalition of voters who come together around some shared issues of concern but who lack the ideological unity that typifies conservatives in the United States.

The Republican Party is also the past. Its base of less educated, older, white voters is an increasingly smaller part of the American electorate. Consequently, the Republican Party can maintain power only through a combination of voter suppression and other demobilization efforts.

The Democratic Party is the present and future. Its base is more educated, younger and more racially diverse. Demographic trends suggest that the Democratic Party’s base will grow and become only more powerful in the future.

As Drum's ill-conceived column for Mother Jones showed, “whitesplaining” (or “mansplaining”) about the perils of identity politics and racism is not a way to mobilize the Democratic Party’s black and brown voters. It may be a smart tactic to appease the angry white people who flocked to Trump. But pandering to them will ultimately only weaken the Democratic Party by minimizing the concerns of its most reliable supporters.