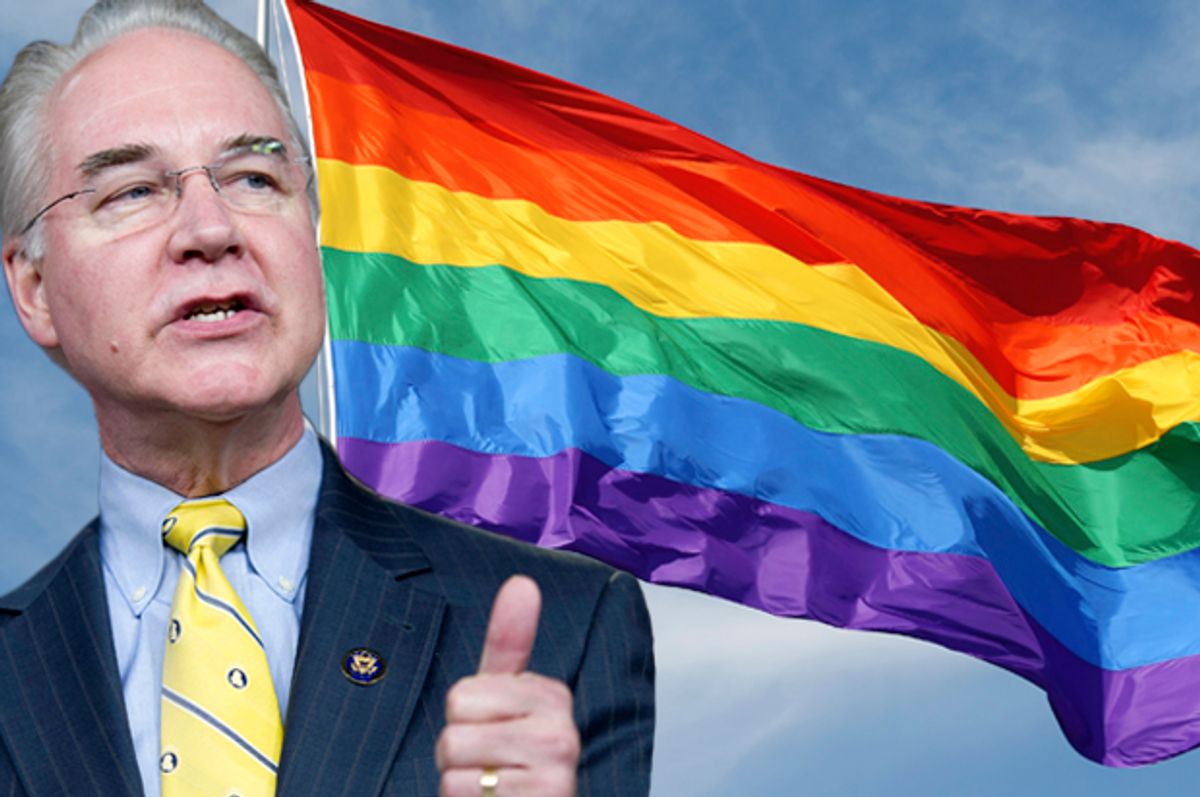 Rep. Tom Price, who was selected by President-elect Donald Trump as his pick for secretary of health and human services on Monday, has previously expressed views about the LGBTQ community that call into serious question his ability to represent its interests in good faith.

According to a RightWingWatch article in 2013, Price was engaged in a conference call with Tea Party Unity, a group created by conservative pastor Rick Scarborough, when he received a call from Rabbi Noson Leiter, who is best known for notoriously blaming Superstorm Sandy on New York's decision to extend marriage rights to same-sex couples.

"Congressman, is it feasible to consider that any legislation on the various moral issues that’s being considered, whether it be pertaining to the homosexual agenda, abortion or pornography, taking into account the fiscal impact of that legislation?" Rabbi Leiter asked Price. "In other words, when they want to let’s say promote some homosexual agenda item, that they should take into account the tremendous medical health impact and economic impact that promoting such a lifestyle will result in."

Price replied by saying that Leiter was "absolutely right," before going on to express sentiments that should send shivers down the spine of those who support LGBT equality.

"The consequences of activity that has been seen as outside the norm are real and must be explored completely and in their entirety prior to moving forward with any social legislation that would alter things," Price said.

"I’m always struck by people who wake up one morning and think that they’ve got a grand new way of doing something when as you all know that the tried and true traditions in history that made us great are preserved and have survived because they are effective," Price added. "I hear you, medical health and costs; you talk about a huge cost-driver to state pensions and other things, many of these areas would significantly alter state balance sheets."

It is widely believed that Trump chose Price to lead the Department of Health and Human Services because of his staunch opposition to the Affordable Care Act.

Price is also notorious for opposing marriage rights for same sex couples and mandatory contraception coverage. (He once falsely claimed that "not one" woman in the country cannot afford birth control.) He also repeatedly interrupting Rep. Lois Capps, D-California, by shouting "I object!" as she attempted to deliver a speech in favor of health care reform.