Fidel Castro's Cuba was accused of numerous human rights abuses — while the crimes of U.S. allies are barely mentioned

Cuba's human rights violations are nothing compared to the crimes of U.S. allies, which the media largely overlooks 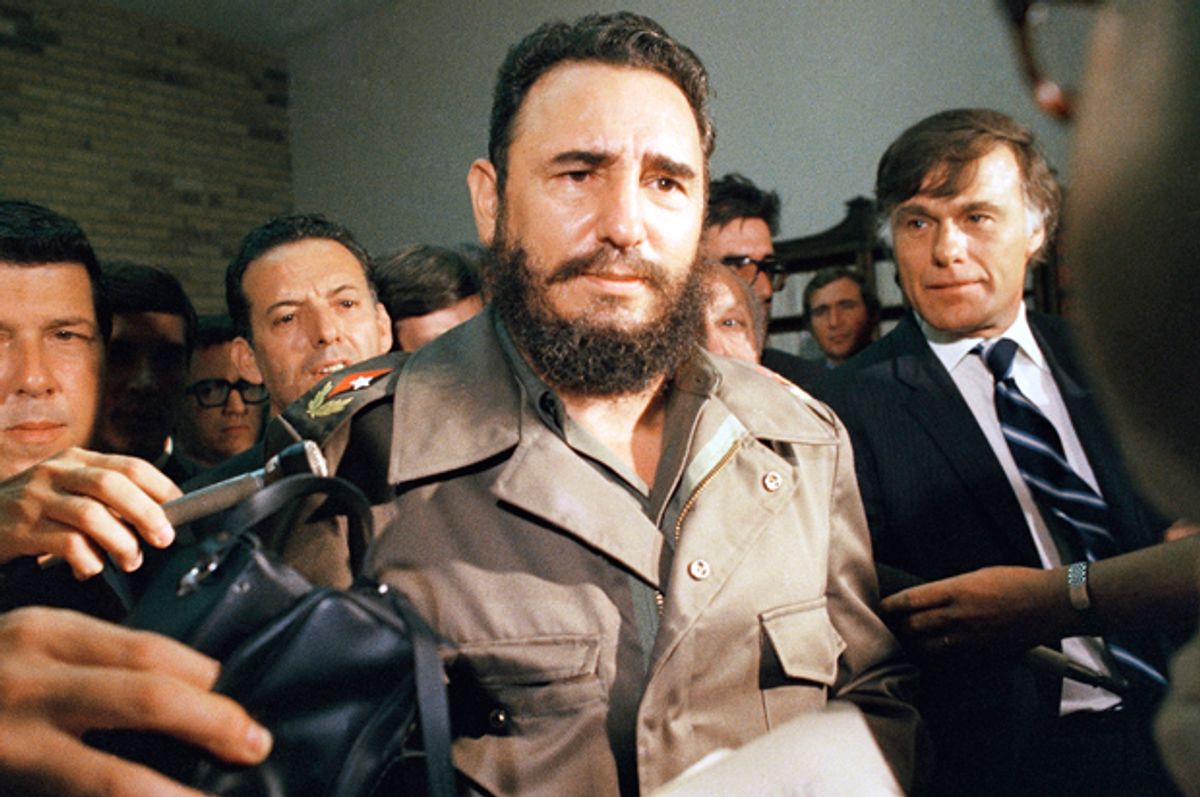 In the wake of the passing of Cuba's revolutionary leader Fidel Castro, there has been no dearth of discussion of the island nation's human rights violations.

For starters, it is the definition of hypocrisy for such criticisms to come from the United States, which for more than 50 years waged a campaign of terror against Cuba. The United States' own human rights abuses have ranged from carrying out at least 638 assassination attempts to training and harboring of right-wing terrorists, as well as staging an outright military invasion and torturing  detainees at Guantánamo Bay.

U.S. politicians' talk of human rights in Cuba is ludicrous considering our government's history of supporting far-right death squads throughout Latin America, extremist paramilitaries that have waged horrific campaigns of terror against civilians in countries like Nicaragua, murdering, torturing and raping men, women and children.

Even more outrageous is the utter silence on the exponentially worse crimes of numerous American allies. Cuba certainly does not have a perfect human rights record. But what country does? Where are the U.S. politicians condemning the much more egregious crimes of our allies?

Since Castro's death, there has been a torrent of articles published about Cuba's abuses. Where are all the think pieces on Saudi Arabia, a close U.S. ally and one of the most oppressive regimes in the world? This is a theocratic absolute monarchy that carries out mass executions of dissidents, beheads drug dealers, systematically subjugates women and has supported extremist groups like al-Qaida and ISIS and yet receives glowing support from the U.S.

A double standard is clear when one considers the extreme human rights abuses committed by America's friends. Such abuses are not just overlooked; they are often outright justified.

This double standard is reflected in the media.

When King Abdullah of Saudi Arabia died in 2015, the Western media systematically whitewashed his horrific crimes against humanity, risibly portraying him as a "shrewd" and "cautious" "reformer." This is the same media that demonized Fidel Castro for "defying" the U.S. and standing up to imperialism. (As Glenn Greenwald put it, "The amount of attention and concern a foreign leader's abuses receive in US discourse is solely determined by how much they 'defy' the US.")

Media: The absolute monarch of the Western-backed extremist Saudi dictatorship was a "reformer"—but Fidel Castro was a "murderer" & "tyrant" pic.twitter.com/cXfEMCvKnd

Moreover, where are the harsh denunciations of other U.S.-backed repressive monarchies like Qatar and Bahrain? What about NATO member Turkey? That strategic Western ally has purged more than 110,000 people and imprisoned at least 40,000 since July, jailed members of parliament without charge, killed thousands of people and displaced hundreds of thousands more in a war against its Kurdish minority.

Instead, the U.S. government and the media that for the most part obediently follows its lead fixate on the human rights abuses of Cuba — while ignoring the fact that the island nation has transformed itself from a virtual U.S. colony tormented by systematic health problems, illiteracy and uneven development into a country with one of the most respected health care systems in the world, the best education system in Latin America and a lower infant mortality rate than the U.S.

Yet there is no lack of U.S. politicians willing to excoriate Cuba's revolutionary government after Castro's death. Where, pray tell, are those with the gall to criticize Israel? This is a top ally that the U.S. State Department has admitted carries out unlawful killings and uses excessive force and torture against Palestinians, whose land it has illegally occupied for nearly 50 years.

Or, even more relevant to the question of Cuba, what about Colombia, where U.S. government's "Plan Colombia" became a "bloodbath," as historian Greg Grandin wrote?  When it comes to Colombia, he added, a bipartisan celebration "is taking place on a mountain of corpses and a sea of misery."

A look at the preposterous double standard on Colombia vis-à-vis Cuba is very instructive. "The billions of dollars provided by Washington basically turned the [Colombian] state, including its intelligence apparatus, over to the paramilitaries," Grandin explained. He continued, "Wrap your head around this number: 6,939,000. That’s the tally of Colombia’s internal refugees, the largest dispossessed population in the world, more than Syria and Iraq, driven off their lands largely by the military . . . or by settler-paramilitaries who took their property."

Colombia's right-wing regime is often cited by the U.S. as a positive model in a region otherwise full of left-wing, anti-imperialist governments. Yet Grandin noted that "between 2002 and 2008 — the heyday of Plan Colombia — the Colombian military executed at least 3,000 civilians, mostly poor peasants, then dressed them in rebel olive-green and posthumously armed them. Thus were created what in Colombia is known as 'false positives,' which helped the military boost combat statistics to prove that the government’s campaign against Colombia’s rebels was working."

If anything remotely resembling those crimes were committed by Bolivia or Venezuela, yet alone by Castro's Cuba, "the outrage in the US media and Congress would be deafening," Grandin wrote. "As it was, you heard barely a peep about this carnage, which was not only funded by the United States, but carried out to justify continued funding."

The Washington Post openly spelled out this incredible double standard in its obituary for former Chilean dictator Augusto Pinochet. With the help of the U.S. government, Pinochet overthrew Chile's democratically elected socialist government in 1973 and subsequently established a brutal regime that executed, tortured and disappeared tens of thousands of people.

In its 2006 obituary for the totalitarian Chilean despot, The Washington Post boasted, "His legacy is Latin America's most successful country."

According to the same newspaper's editorial board, however, Cuba's Castro had a "terrible legacy." The difference? Pinochet was a capitalist dictator backed by the U.S. who overthrew a democratic government that opposed American interests, whereas Castro overthrew a capitalist virtual U.S. colony and created a socialist state that opposed the U.S.

Perhaps this comes as no surprise. This is the same double standard analyzed by Noam Chomsky and Edward Herman in their opus "Manufacturing Consent: The Political Economy of the Mass Media." It is equally visible in countries like Yemen, Syria and Israel.

In the new documentary film "All Governments Lie: Truth, Deception, and the Spirit of I.F. Stone," Democracy Now founder Amy Goodman asked a rhetorical question: If major U.S. media outlets were directly controlled by the government and not large corporations, “how would it be any different?” The question is hard to answer.

The deranged media and political discourse on Cuba and the legacy of Fidel Castro suggests there would hardly be any difference.