Breaking: The Greatest Living American Writer and Fidel sittin' in a tree

We met in Buenos Aires steak house and with my help, Fidel Castro changed the word almost as much as I did 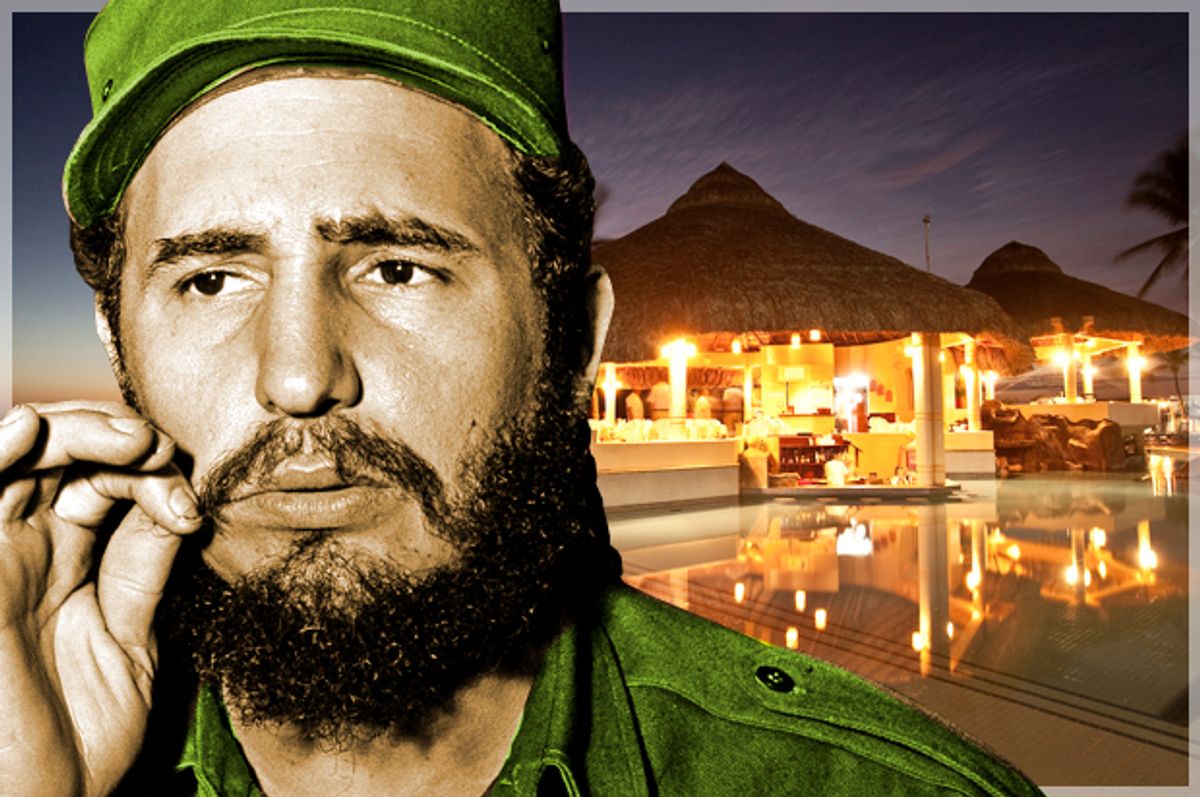 “Dictators,” I once wrote in “The Revolutionary Caudillo in Winter or Maybe Spring,” my epic study of Castroism, “are created, not born, unless they are actually born, but that is very rare.” How true that remains, even today. And no writer, not Jon Lee Anderson, not Gabriel Garcia Márquez and certainly not Jonathan Safran Foer (who hasn’t left his brownstone in seven years) had a greater hand in Fidel Castro’s creation than me. I mourn his death as though it were my own. Maybe, soon, it will be.

I first met Fidel in the summer of 1953, when I accidentally sat down at his table at a Buenos Aires steak house. Fortunately, he recognized me. I’d recently been featured in a Life photo spread titled “Lithe, Beautiful Essayist, Screenwriter Enjoys Yacht Outing with the Kennedys.”

That night, Fidel paid me homage. He was always the most flattering sort of man, with the best taste. I appreciated his attentions, which were focused and powerful and often came with cash attached.

“I admired your novel ‘Naked Up and Down the Beach at Normandy,’” he said.

“Thank you,” I said. “I dedicated it to Wally Trumbull, my long-lost love from Exeter, who vanished on Guadalcanal so very long ago.”

“A sad tale of history,” said El Jefe. “I am looking to write some history of my own.”

He informed me, off the record, of his plans to overthrow the Batista regime, which had oppressed the people for too long by allowing freedom of speech and excessive luxury hotel development.

“Soon,” Fidel said, “Cuba will belong to the people again.”

“Which people?” I asked.

We had a good chuckle. I gave him some advice.

“Grow a beard,” I said. “Wear fatigues. And always imprison thousands of dissidents for even the most minor crimes. Everyone will love you for that.”

“Huh,” he said. “I hadn’t thought of those things before. Excellent suggestions.”

Naturally, once Fidelito (as I called him secretly, when I gazed at his sepiaed picture at night) took power, he invited me to stay with him on the island once a year, except for in 1961, when he was pretty busy. He always had a limousine meet me at the airport, which immediately drove 100 miles to a private harbor, where Fidel waited for me on a 90-foot yacht attended by dozens of scantily clad lady sailors who would sit on my lap for a peso.

“You know,” I said one night over mojitos, “I would really like to see Havana some day, so I can personally bear witness to the Cuban miracle.”

“Havana is a dump,” he said, “which is why I have my private island.”

That was the kind of brusque realism I loved about Fidel. He knew how to flatter, cajole, wheedle and coax. And he always knew exactly what I’d been working on.

“Your novel 'Leon, a Man of the Streets' truly captures the plight of the American Negro like none other,” he said one balmy night in 1972.

“How would you know?” I said. “It’s not coming out until next March.”

“I have obtained satellite photographs of the manuscript,” he said.

“Well call me Nancy and throw me in the dungeons!” I said. “That’s great!”

“Who told you about the dungeons?” he said.

As Fidel grew older and Cuba became exponentially more literate and healthier, my relationship with him grew and deepened. I wrote a sequel to my previous book, this one called “The Autumn of the Winter of the Autocrat,” which was translated into 60 languages, had 16 printings in Berlin and won me my third Premio Bolivar for literary services to the peoples of Latin America. No other U.S citizen has ever come close to that level of honor. As I said in an interview with the Cartagena Daily Worker, “when it comes to literary inspiration, no world leader in history, not even Abraham Lincoln or Julius Caesar, inspires greater reveries than Fidel Castro. Truly, his life has been my greatest subject.”

One night a decade ago on his private island, after he had offered, and I’d refused, to let me “have sex with a shockingly attractive horse,” Fidel grew pensive as he puffed on a cigar. I got out my notebook and tape recorder, and he gave me the nod that indicated “I will not discuss civil liberties violations now, so you may take notes.”

Fidel sighed. “I shall die fairly soon,” he said.

“Nonsense,” I said. “You will live for a thousand years.”

“No,” he said, “even the immortal men of the people’s struggle must die. All that matters now is that my legacy is preserved so that the world will understand that I lived for the working class, and that I conquered all.”

“You can count on me, jefecito,” I said.

Now Fidel is gone. When giants cease to walk the earth, their footprints stay behind forever. What truly happened in his final days will be revealed in my next book, “The Last Days of the Revolution in Winter for Real This Time,” to be published soon in many languages but especially in French. We must remember all the good that Fidel did and forget all the bad things that he didn’t do.

And now if you’ll excuse me, Caracas is on the line.