Democracy depends on a free and independent press, which is why all tyrants try to squelch it 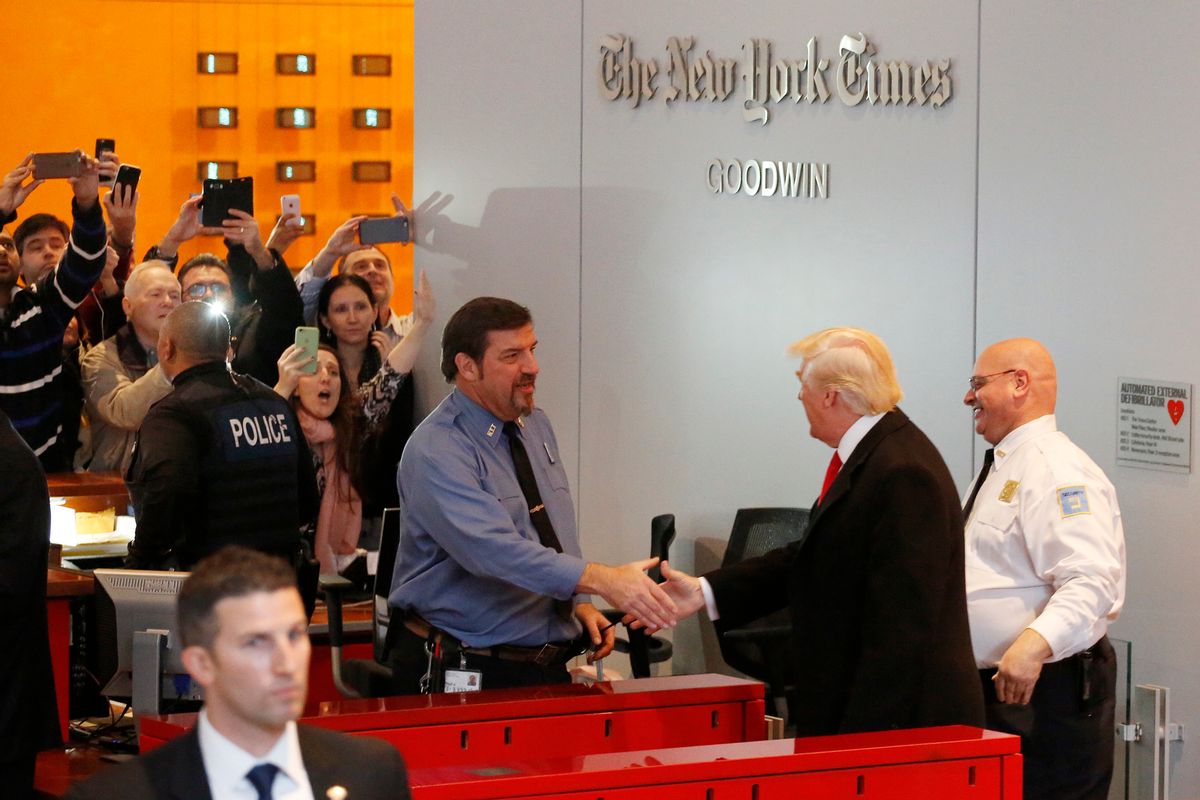 Democracy depends on a free and independent press, which is why all tyrants try to squelch it. They use seven techniques that, worryingly, President-elect Donald Trump already employs.

Last week, Trump summoned two-dozen TV news anchors and executives to the twenty-fifth floor of Trump Tower to berate them for their reporting about him during the election. For twenty minutes he railed at what he called their “outrageous” and “dishonest” coverage. According to an attendee, “Trump kept saying, ‘we’re in a room of liars, the deceitful dishonest media who got it all wrong,’” and he called CNN a “network of liars.” He accused NBC of using unflattering pictures of him, demanding to know why they didn’t use “nicer” pictures.

Another person who attended the meeting said Trump “truly doesn’t seem to understand the First Amendment. He thinks we are supposed to say what he says and that’s it.”

During the campaign, Trump blacklisted news outlets whose coverage he didn’t approve of. In June he pulled The Washington Post’s credentials. “Based on the incredibly inaccurate coverage and reporting of the record setting Trump campaign, we are hereby revoking the press credentials of the phony and dishonest Washington Post,” read a post on Trump’s Facebook page.

After the election Trump agreed to meet with The New York Times and then suddenly cancelled the meeting when he didn’t like the terms, tweeting “Perhaps a new meeting will be set up with the @nytimes. In the meantime they continue to cover me inaccurately and with a nasty tone!” (He then reversed himself again and met with the news outlet.)

3. Turn the public against the media

Trump refers to journalists as “lying,” “dishonest,” “disgusting” and “scum.” Referring to the journalists at his rallies, Trump said, “I hate some of these people,” adding (presumably in response to allegations of Vladimir Putin’s treatment of dissident journalists) “but I’d never kill ‘em."

He questions the motives of the press, claiming, for example, that The Washington Post wrote negative things about him because its publisher, Jeffrey Bezos, a founder of Amazon, “thinks I would go after him for antitrust.” When The New York Times wrote that his transition team was in disarray, Trump tweeted that the newspaper was  "just upset that they looked like fools in their coverage of me” during the presidential campaign.

Trump continues to condemn the coverage he’s received from NBC’s “Saturday Night Live.” In response to Alec Baldwin’s recent portrayal of him as overwhelmed by the prospect of being president, Trump tweeted that it was a “totally one-sided, biased show — nothing funny at all. Equal time for us?”

When Brandon Victor Dixon, the actor who plays Aaron Burr in the Broadway musical “Hamilton,” read from the stage a message to Vice President-elect Mike Pence, who was in the audience — expressing fears about the pending Trump administration for the “diverse group of men and women of different colors, creeds and orientations” on the cast — Trump responded angrily. He tweeted that Pence had been “harassed,” and insisted that the cast and producers of the show, “which I hear is highly overrated,” apologize.

Trump said he plans to change libel laws in the United States so that he can have an easier time suing news organizations. “One of the things I’m going to do if I win … I’m going to open up our libel laws so when they write purposely negative and horrible and false articles, we can sue them and win lots of money.”

During the campaign, Trump specifically threatened to sue The New York Times for libel in response to an article that featured two women accusing him of touching them inappropriately years ago. Trump claimed the allegations were false, and his lawyer demanded that the newspaper retract the story and issue an apology. Trump also threatened legal action after The Times published and wrote about part of his 1995 tax return.

Trump hasn’t had a news conference since July. He has blocked the media from traveling with him, or even knowing whom he’s meeting with. His phone call with Vladimir Putin, which occurred shortly after the election, was first reported by the Kremlin.

7. Bypass the media and communicate with the public directly

The American public learns what Trump thinks through his tweets. Shortly after the election, Trump released a video message outlining some of the executive actions he plans to take on his first day in office.

Aids say Trump has also expressed interest in continuing to hold the large rallies that became a staple of his candidacy. They say he likes the instant gratification and adulation that the cheering crowds provide.

The word “media” comes from “intermediate” between newsmakers and the public. Responsible media hold the powerful accountable by asking them hard questions and reporting on what they do. Apparently Trump wants to eliminate such intermediaries.

Historically, these seven techniques have been used by demagogues to erode the freedom and independence of the press. Even before he’s sworn in, Trump seems intent on doing exactly this.