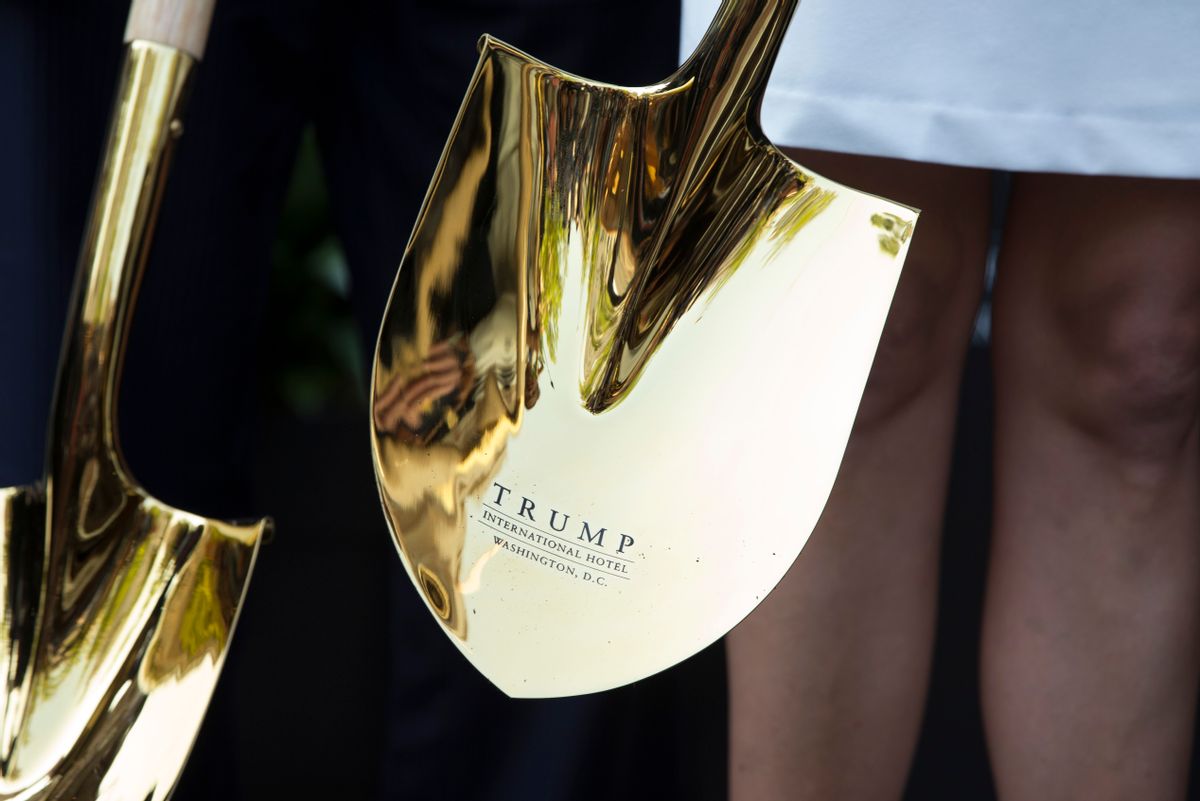 A shovel with the Tump logo is sheen during a ground breaking ceremony for the Trump International Hotel on the site of the Old Post Office in Washington, Wednesday, July 23, 2014. (AP)
--

The Heritage Foundation, one of America's top conservative think tanks, is honoring some of their politically influential group's most generous donors — at Donald Trump's Washington D.C. hotel.

As Politico reported on Monday, the event will be led by Vice President-elect Mike Pence, who will deliver the keynote address, and will celebrate those who donated at least $1,000 to the Heritage Foundation each year.

The Trump hotel where it will be held is actually a renovation of the Old Post Office Building located only a few blocks away from the White House. Politico also noted other upcoming events this month that will take place there and which could post a conflict of interest for Trump, such as Bahrain booking the hotel for a "national day reception" and the Azerbaijan Embassy co-hosting a Hannukah party there.

"The Heritage donor conference is being held across the street at the Ronald Reagan Center,” said Heritage Sarah Mills told Politico. “We had such a big response to the Pence speech, confirmed less than two weeks ago, that the only space close by that would meet our space needs and new security requirements without negatively impacting the conference schedule was the adjacent Trump hotel.”

This isn't the first time that concerns have arisen about how Trump's Washington hotel might present a conflict of interest for the president-elect. As Salon reported in November, there have already been reports of foreign diplomats taking reservations at the hotel in order to curry favor with the new administration. Although many Republican leaders are trying to downplay the seriousness of this issue, Trump personally profiting from foreign powers while serving as president could be construed as a violation of the Emoluments Clause of the Constitution (Article I, Section 9, Clause 8):

“No Title of Nobility shall be granted by the United States: And no Person holding any Office of Profit or Trust under them, shall, without the Consent of the Congress, accept of any present, Emolument, Office, or Title, of any kind whatever, from any King, Prince, or foreign State.”

As the Heritage Foundation itself explains about the purpose of the emoluments clause on its website, "the Framers intended the Emoluments Clause to protect the republican character of American political institutions. 'One of the weak sides of republics, among their numerous advantages, is that they afford too easy an inlet to foreign corruption.' The Federalist No. 22 (Alexander Hamilton). The delegates at the Constitutional Convention specifically designed the clause as an antidote to potentially corrupting foreign practices of a kind that the Framers had observed during the period of the Confederation."