The good, the bad, and the gnarly of pop culture's big flashback 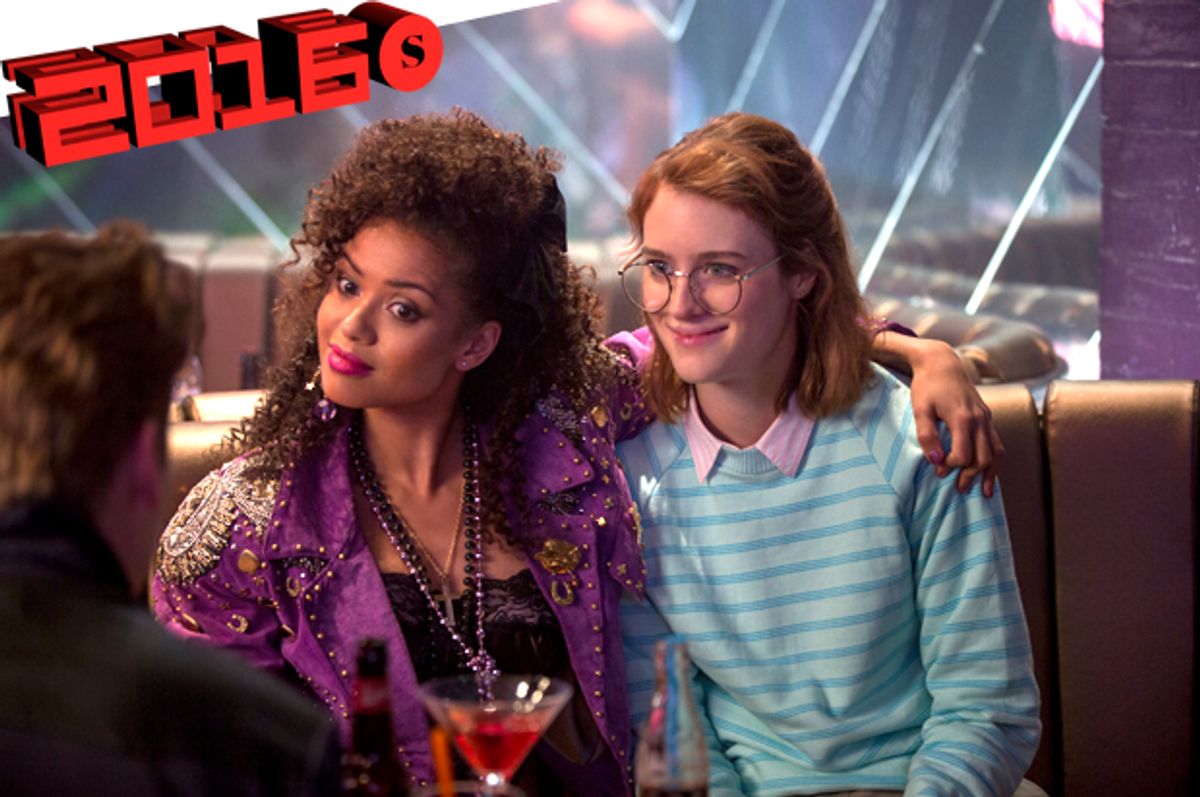 What with all the surveillance, fake news and oppression, 2016 definitely turned out to be enough like "1984" to give a lot of us nightmares. But with the return of both the Cold War and heavy-handed blusher, it also turned out to be a lot like . . . 1984. And in a year that took us back to the future on a less than excellent adventure, some Reagan-era throwback moments stood out. So pop your collar, open up a Tab, and relive our best moments of this year's eighties.

After turning up on "Master of None" last year and "Stranger Things" this summer, Toto's 1982 hit "Africa" went for the trifecta this fall via a romance-igniting, maracas-fueled duet between Jess (Zooey Deschanel) and Robby. Their sweetly nerdy collaboration turned out to be, as Jess's bestie Cece declared, "electric."

9. "Deadpool" thanks you for being a friend

The Ryan Reynolds blockbuster featured a deluge of Easter eggs and pop culture references, but it was its hero's fondness for "Golden Girls" star Bea Arthur and the movie "Weird Science" that proved its superhero's perfect woman was probably more Dorothy Zbornak than Kelly LeBrock.

Director Richard Linklater's "spiritual sequel" to "Dazed and Confused" follows a group of Texas college students during the weekend leading up to the start of the fall of 1980 semester. Capturing a moment right before the election of Ronald Reagan, the death of John Lennon, and the CDC's first alert of the nascent AIDS crisis, it's a glimpse of the eighties before it truly became the eighties.

The inventive musical series has already sent up genres from rap battles to Busby Berkeley production numbers — and it even already went back to the eighties last season with a Huey Lewis-style song about bisexuality. But its recent power ballad "You Go First" offered all the lady duet high notes and feathered hair of the heyday of Heart.

It's no accident that both television dramas, deeply steeped in the real business and political climate of the eighties, seemed hauntingly relevant right now. Confronting sexism, technology and paranoia, both shows hit their strides and felt fresher than ever.

Of all the things those of us who were alive in the eighties did not imagine ever coming back, REO Speedwagon surely tops the list. Yet Pitbull — with the help of Enrique Iglesias — flipped Speedwagon's 1981 original "Take It on the Run" and made "Messin' Around" simultaneously witty and anthemic.

4. The return of Rick Astley

Attention: You are not being rickrolled; this is really happening. More than two decades after all but retiring from the industry, the still boyish 50-year-old singer and meme hall-of-famer returned with a new album and tour, proving he's never gonna give us up.

3. The return, also, of Johnny Marr

The man who, as part of The Smiths, taught a generation that emo was a thing came back with a new memoir titled "Set the Boy Free" and announced a 2017 London performance. Life truly is sweet.

The spooky, deliriously bingeworthy Netflix series so brilliantly riffed on the films of the eighties, it somehow felt like it came from the eighties. If you ever wondered what "Alien" crossed with "The Goonies," with Veronica from the 1988 classic "Heathers" as a distressed mom, would look and sound like, now you know.

Unlike shows like "The Goldbergs," which smoosh the events and trends of an entire decade into one big punchline salad, the time-traveling episode of Charlie Brooker's series got everything right. From Max Headroom to "The Lost Boys" to the best use ever of Belinda Carlisle's "Heaven Is a Place On Earth," the "San Junipero" episode delivered all the show's trademark science fiction twists, but made them all the more potent by staying beautifully faithful to the spirit of the time.