It was a bad year for real abortion rights, but a good year for fictional ones 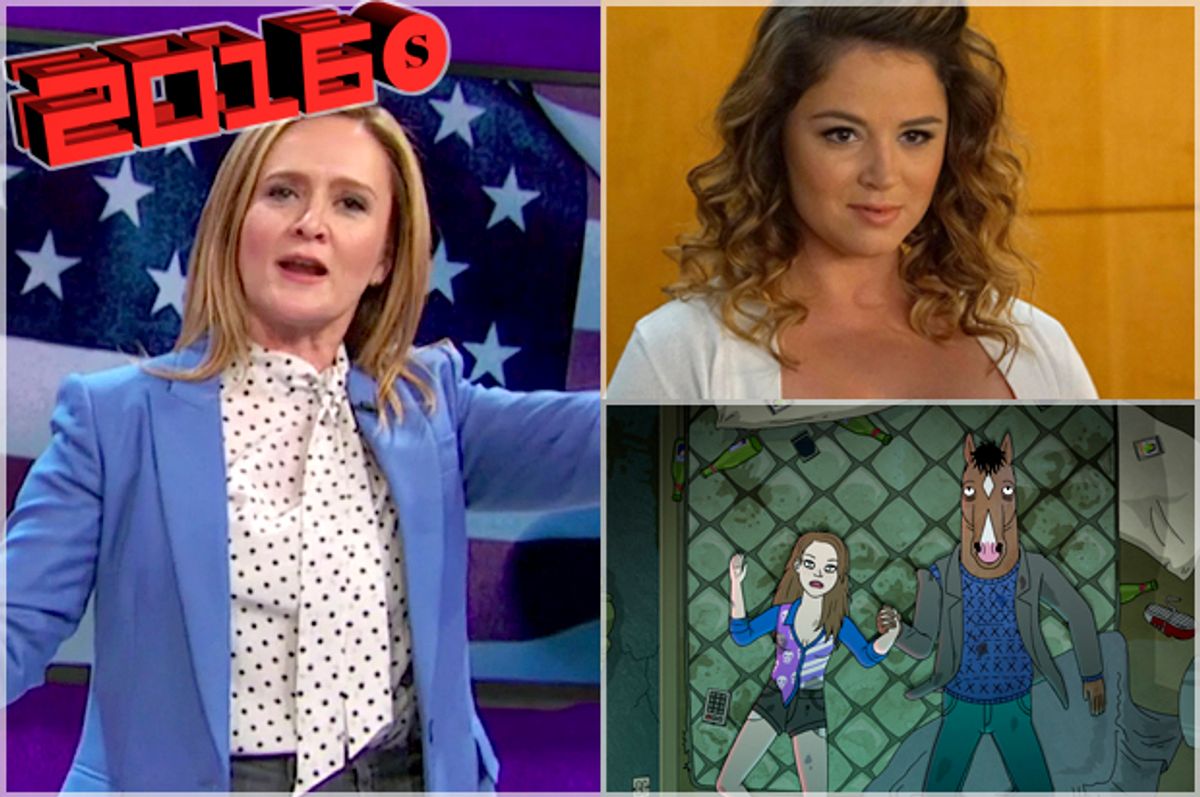 At least it's been a good year to talk about abortion. It's been such a terrible year for women in so many ways, it's difficult to see the places progress has been made. But no matter how difficult our (mostly male) conservative overlords try to make it, the fact remains that abortion is a constitutional right and a routine procedure that well over half a million real American women undergo a year. And more fictional ones than ever.

The Supreme Court's Roe v. Wade decision is now almost old enough to be in menopause, but until recently, prime time television has still had a skittish relationship with reproductive choice. Pregnancy storylines have tended to end in either conveniently well-timed miscarriages or shark-jumping babies. But in 2016, that changed. Here are our TV's best abortion moments of the year.

10. "Difficult People": Kessler Epstein Foundation
Here's to normalization. On the Hulu comedy, Julie and Billy didn't face anything near the problem of unplanned pregnancy. Instead, they accidentally escorted a young woman past protestors to an abortion clinic, and wound up getting free brownies and some really good swag. "I hope that they give these gift bags to their patients too," Julie observed. "I feel like if you leave a little something behind, you should take something home."

9. "Scandal": That's My Girl
In a pivotal 2015 episode, the show's chief protagonist Olivia Pope had an abortion. In the 2016 season finale, we saw the consequences of that choice — that she had continued to live her life, that the man who impregnated her understood and "supports your choice, not that you needed it," and that she remained, in her words, "not ashamed at all."

The show's entire premise has hinged on a titular character who was the result of an unplanned teenage pregnancy, grappling with her own spectacularly unplanned pregnancy and motherhood. So when Jane's free-spirited mother Xiomara found herself knocked up again thanks to an ill-advised one-night stand, it seemed the show was heading toward adding another baby to the mix. Instead, between the season premiere and second episode, Xo terminated the pregnancy offscreen — and the matter was honestly, supportively addressed, and then dropped.

7. "Crazy Ex-Girlfriend": When Will Josh and His Friend Leave Me Alone?

In its second season, Rachel went overboard with a pregnancy scare, but it turned out her bestie Paula was the one who should have been worried. With a new acceptance to law school and her troubled marriage back on track, the mother of two weighed her options and chose an abortion, followed by a pizza. Like "Jane the Virgin," the episode showed that plenty of women who have abortions already are mothers themselves.

But then again, some women get abortions because they don't want to be mothers, and that's fine too. On creator Stephen Falk's audacious comedy, the spoiled, immature, occasionally stabby Lindsay, who'd competitively fetishized the idea of getting pregnant, did one of the most mature, responsible things she's done yet on the show. She went out for lunch with a friend and then grabbed herself an "a-bo-bo."

In a sequence tailor made to make your right-wing family members apoplectic, the animated comedy took Diane's rational, adult decision and turned it into a musical number. Sung and danced by a dolphin. Called "Get Dat Fetus, Kill Dat Fetus." The unexpected storyline made for insightful cultural commentary, and a banger for your workout mix.

Early in the year, when the hosts sat down to discuss Ohio's attack on Planned Parenthood, Candace Cameron Bure argued that "The child has no voice." But Goldberg, who remembers what the world was like before abortion was legal, shot down that logic. "It used to be all about the hanger," she said. "And in the old days, the reason abortion became legal, just in case folks don’t remember, is because people got tired of tripping over women who gave themselves abortions in bathrooms, or went to people who gave them Clorox to drink. People said, 'We need to do this a different way because we need to take this out of the hands of women doing this to themselves and make it safe and clean.' That's how all of this began." It was a moment that drew gasps from the audience — and reminded viewers about the horrifying consequences of taking away women's access to abortion.

Bee, a beautiful gift from heaven that we truly don't deserve, has been a vocal critic of the multiple assaults on reproductive rights since the show launched last winter. She's gone deep on the insanity of Texas's abortion laws, she's explained the inaccuracies of Trump and Chris Wallace's dopey abortion commentary during the debates, and most recently, schooled America on Ohio's loathsome "heartbeat" bill — a move she rightly referred to as "about as illegal as crack."

Dawn Porter's documentary, which aired on PBS's "Independent Lens" in June, revealed the punitive and arbitrary legal obstacles thrown at women's health facilities — and the people fighting to keep abortion safe and legal. What's at risk when reproductive rights are threatened? One health worker recalled for the camera, "I remember getting a call from a patient and she said, 'What if I tell you what I have in my kitchen cabinet, and you tell me what I can do?'"

1. The final presidential debate
Proving yet again that he knows nothing about how pregnancy or babies or women's bodies operate, newly woke "pro-life" candidate Donald Trump condemned late-term abortion by declaring, "In the ninth month, you can take the baby and rip the baby out of the womb." (This is not a thing.) Hillary Clinton, meanwhile, a person who has actually given birth, told the nation, "The government has no business in the decisions that women make with their families in accordance with their faith, with medical advice. And I will stand up for that right." The outcome of the election doesn't change the truth of that statement. It only makes it more urgent.