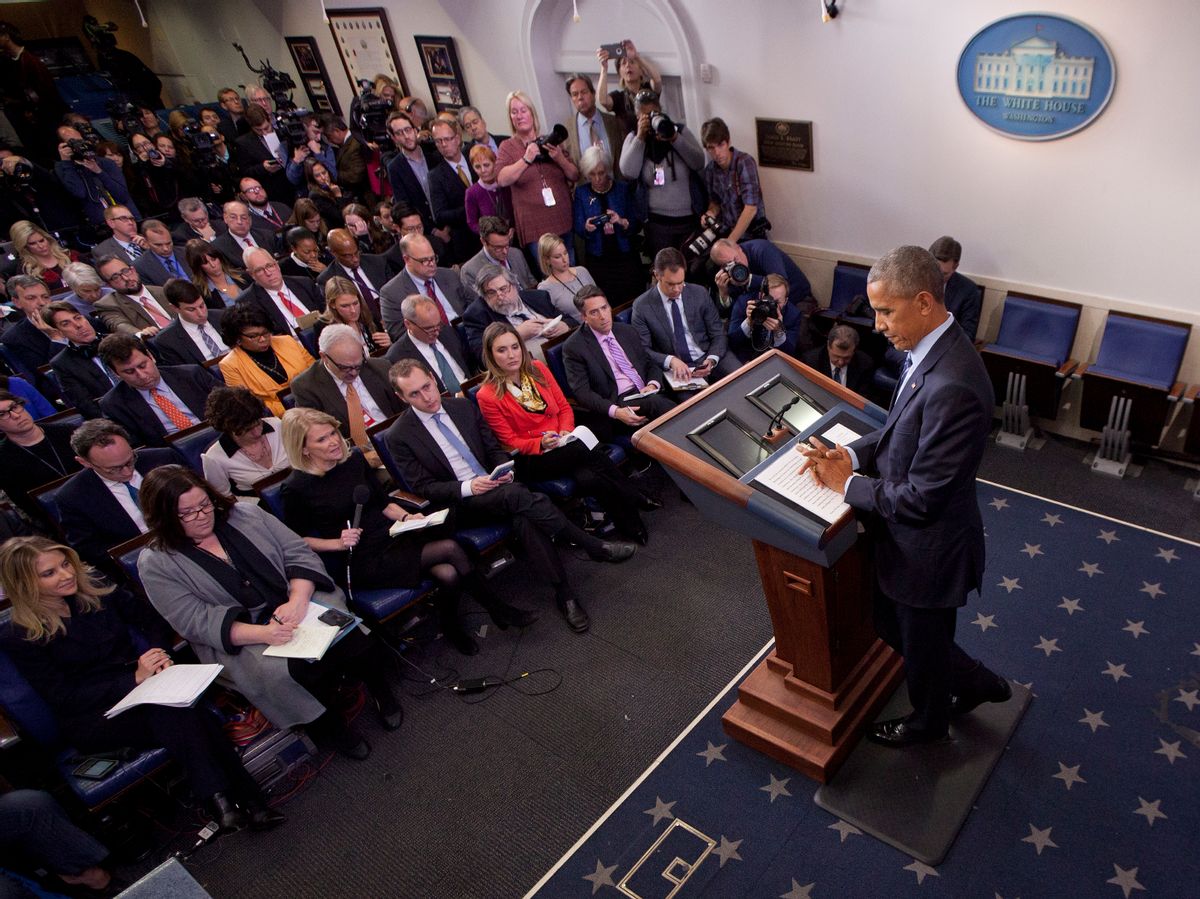 President Barack Obama pauses before speaking during news conference, Friday, Dec. 16, 2016, in the briefing room of the White House in Washington. (AP)
--

During his final press conference of 2016, President Barack Obama made it clear that he is deeply disturbed by the growing pro-Putin bias in the Republican Party.

After citing an Economist and YouGov poll that found that 35 percent of Republicans hold a favorable view of Russian dictator Vladimir Putin, Obama pointed out that "Ronald Reagan would be rolling in his grave" if he saw that the GOP had become so sympathetic to a Russian despot.

But Obama held his sharpest words for the media, who eagerly published every juicy tidbit from emails hacked by Russia.

“How did that happen? It happened in part because, for too long everything that happens in this town, everything that's said is seen through the lens of does this help or hurt us relative to Democrats or relative to President Obama?” President Obama said. “And unless that changes, we're going to continue to be vulnerable to foreign influence because we've lost track of what it is that we're about and what we stand for.”

President Obama also bemoaned the fact that Americans politics had become "so polarized and so nasty that in some cases, you have voters and elected officials who have more confidence and faith in a foreign adversary than they have in their neighbors."

The president also didn't have much use for individuals who continue to deny Russia's involvement in the hacking.

"Asked repeatedly about the intelligence assessments that the Russians were behind the hack, that Putin was personally involved, that it targeted Democrats, that it was meant to take down Hillary Clinton, Obama said it was so obvious he didn’t need to say it out loud, going instead for shrugs, big sarcastic frowns, upturned hands, eyes wide open and eyebrows almost hitting his hairline: 'Well, come on,' he said," according to a report by Politico on Saturday.
Obama also described how he pulled Putin aside during a conference in China in September and ordered him to "cut it out." According to the president, that's when the Russian hacks stopped.
Obama also promised that "we will provide evidence that we can safely provide that does not compromise sources and methods. The way we catch folks is by knowing certain things about them that they may not want us to know."