Don't go, Michelle Obama! Her Oprah interview was a powerful reminder of why she'll be missed 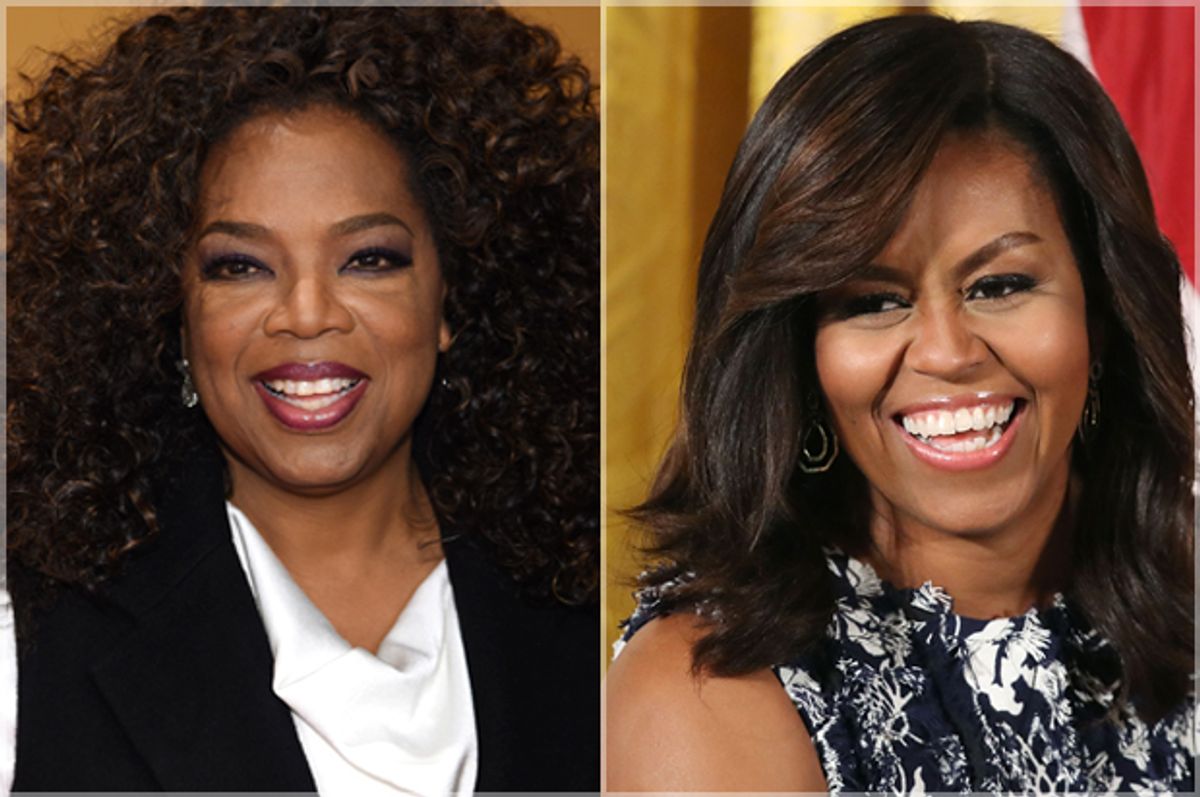 President Barrack Obama’s time in office is coming to an end. The past few weeks and the weeks to come were and will be full of critiques, from the people who will ultimately contribute to defining his legacy, on Obamacare, the economy, foreign relations and everything else that gets sliced up into ideological sections.

But his major accomplishment is not debatable, the only thing that the left and right agree on unanimously. His greatest partnership is definitely not with Joe Biden but with the beauty, the intellect and the force that is Michelle Obama. She’s so poised, so gracious and so far above anything petty — and yet still resilient and grounded, clearly showing that she understands the plight of even the poorest Americans. I normally try to not directly speak for others, but I feel many would agree that her presence has been the perfect gift for America over the past eight years.

Millions tuned in last night to watch the first lady sitting down with Oprah Winfrey and reflecting on her time in the White House. She covered her initiatives, her family and gave insight about the power of hope.

"Hope is necessary. It's a necessary concept and Barack didn't just talk about hope because he thought it was just a nice slogan to get votes," she said, sitting across from Oprah. “What else do you have if you don’t have hope? What do you give your kids if you can’t give them hope?”

The first lady went on to explain how the opposite works: Those of us who did not vote for Donald Trump have now seen what it feels like to not have hope, as we sat through a painful election cycle where hope was displaced by misogyny, racism and empty talking points. If you noticed, Trump slung mud at everyone during his campaign except Michelle Obama. He had rough language for Barack, all of the Clintons and the entire MSNBC staff — but he didn’t even think about throwing any dirt on her name.

Trump did respond to her hope comment, though. “Michelle Obama said yesterday that there’s no hope,” he told a booing crowd in Alabama. “But I assume she was talking about the past not the future because I’m telling you we have tremendous hope, and we have tremendous promise and tremendous potential.” Soft words from the biggest internet gangster of our generation.

And still, through the madness and confusion, the first lady handles the Trumps with impeccable class. She told Oprah that the doors will remain open as she cheers for them to win, because if they win, we all win. Aren’t you going to miss her, too? Remember this is all coming after Trump's campaign run on racist rhetoric and controversies over his racist appointees — not to mention watching his wife Melania steal Michelle's words for her Republican National Convention speech line for line. Time and time again over the past eight years, and especially throughout this year's horrible election, Michelle has swallowed political opponents' pettiness and remained unfazed by their lack of logic — and still had the "angry black woman" stereotype thrown at her.

“That was one of those things where you just sort of think, ‘You don’t even know me,’” she said to Oprah. “You just sort of feel like ‘Wow, where’d that come from?'"

The first lady added, "But then you sort of think, ‘This isn’t about me.’ This is about the person or people who write it, you know? That’s just the truth.”

Michelle Obama has a way canceling out the negativity these small-minded people offer without mentioning them or stepping outside her character. Watching her moves over the past eight years, seeing the work and just listening to Mrs. Obama is everything that is missing from the narrative of black women in this country and has played a role in shifting the narrative in a positive direction.

Her public persona makes me think of the women in my family and from my neighborhood. They're the strongest people in the community, the connecters, the ones who always work, finish college and challenge us to do the same while remaining sane in a society that doesn’t fully acknowledge women or people of color. From my late grandma to my youngest niece, black women have set the tone and laid the foundation for everything I’ve accomplished and aspire to be.

We all want Michelle to run in 2020, but her answer is no. Oprah played around that idea of her running for president or her political ambitions in general and the first lady quickly denied. “I don’t make stuff up and I’m not coy,” Obama said. “I’m pretty direct with my intentions.”

Those intentions apparently don’t include holding any government office. But who knows? Life is long and full of surprises; maybe we’ll get lucky and she’ll change her mind.

Meanwhile I’m pretty sure that the combined efforts of our new first ladies, Ivanka and Melania, won’t be even a fraction as impactful as Michelle Obama's. So as we watch Donald collect his electoral votes and we armor up with the emotional gear we’ll need to survive the next four years, let’s take some time reflect on the greatness of Michelle Obama and be thankful that we had a chance to follow her leadership. All praise due to Queen Michelle.