"No Sleep: NYC Nightlife Flyers 1988-1999" chronicles night life in the city when night life meant something 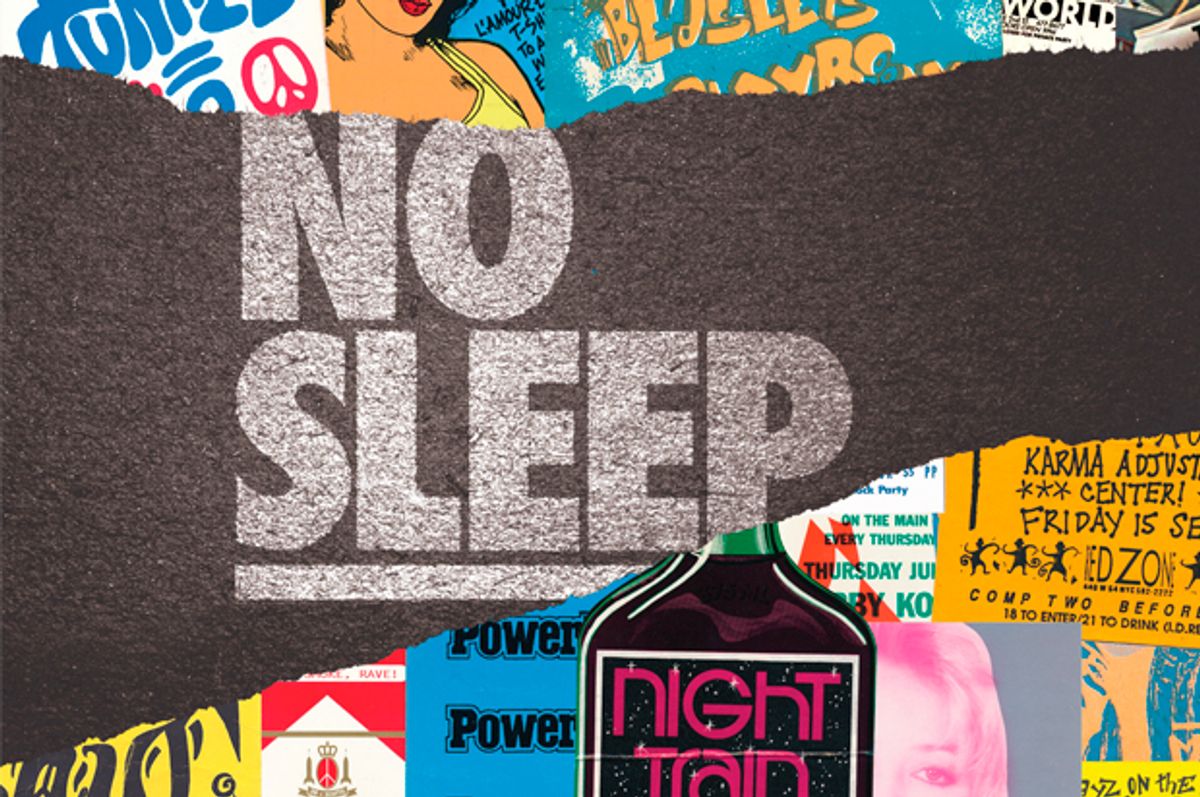 Sometimes you can tell the entire history of a city, or at least that of its after hours cohort, from what’s stuck to its walls and lamp posts. Between 1988 and 1999, arguably the last and most likely final period when downtown Manhattan felt analog and dangerous, reasonably expensive and dangerously fun, the legendary club DJ Stretch Armstrong collected and archived the flyers that advertised various club nights and parties where young artists, Yuppies, black, white, gay, straight, punks and posers mingled, got high on new drugs like Ecstasy and danced until four (or at after hours clubs, until well . . .   whenever). With co-author/Hip Hop historian Evan Auerbach, and DJ/producer Mark Ronson (who wrote the forward), Armstrong recently published No Sleep: NYC Nightlife Flyers 1988-1999 (powerHouse Books) and the response (it’s first run sold out on Amazon) proves that the City and its history remains endlessly fascinating. Here, Stretch looks back at the fin de siècle and its telling and often over-looked artifacts, finally collected for better coffee tables everywhere. Salon speaks with Armstrong about his inspiration for the “No Sleep,” and the city it describes. The interview is lightly edited for clarity.

The book begins in 1988. Did you get the sense that '88 marked a "new" New York City. Andy Warhol was dead. Basquiat was dead. AIDS was no longer whispered about. Street culture was no longer secret for most people.

That's difficult for me to answer because in 88 I was just old enough — barely — to go to clubs. Nightlife was only something I heard about or saw unrealistically portrayed in music videos. I was in tune with the art scene because my parents were in the art world. The loss of Keith Haring was particularly profound, but as a young person enjoying the novelty of nightlife and a new sense of independence and freedom, I felt that I was jumping onto a train that was already moving. 88 didn't feel like new. But it did feel as exciting and filled with possibilities as anything I had experience before or after. In that regard, 1988 was a part of "the 80s" but the city did start to change shortly after that.

What were the biggest differences from say the late 70s/early 80s generation when Hip Hop was considered a fad or an uptown phenomenon?

Well in the 70s, hip-hop was a local phenomenon, rarely breaking out of the confines of the neighborhoods where it was birthed and lived. The 80s saw the simultaneous development of an independent music industry that made it a commodity and spread Hip Hop music along with hip-hop being brought Downtown to clubs. But Hip Hop was never a fad. It has gone through many phases and trends, first as mainly party music, but eventually fragmenting into styles, including social and political consciousness, which is when it became dangerous, and also less desirable in Downtown clubs.

Did the city begin to feel safer in the early 90s and if so did it also feel like it was the beginning of some kind of crackdown? “Giuliani time.”

Somehow, at least in New York City, there seems to be an inverse correlation between "safe" and "fun." Of course, there's nothing fun about crime, but the freedom under which crime can happen more easily is also the freedom that creative people need to congregate and share ideas, often in a way that ended up being undermined by the authorities.

Punk rock fliers were intentionally crude and often binary in design. Black and white and stark. Many of these flyers in your book are colorful and some are explosions of whimsy. Was that by design? A reaction to punk? Also perhaps an expression or by product of the kind of drugs that were prevalent or starting to become prevalent, they were almost like "new 60s" druggy graphics style.

I don't think the flyers we've assembled have any kind of consistent aesthetic, and we touch on so many scenes from over a decade. But unlike the punk flyers which aimed to look like shit, these flyers typically aimed to take advantage of whatever the latest printing technologies would allow them to achieve, in color, type and graphics. But my favorite flyers are the more primitive ones that are black ink on card stock. They're probably the closest thing to the punk flyers, though I doubt there was any conscious connection.

How did drugs like E and K effect the scene? And what do you remember about the music changing during the new drug phase? Did the BPMs get super fast or slow/dubby trancey moreover?

K was more of a rave thing and doesn't really enter into the conversation with these flyers. E was certainly a part of nightlife, though it didn't catch on in hip-hop circles 'til the end of the 90s. I'm no expert in this area, but it seems like while people enjoyed using it, it didn't have as much of an impact on the music in NYC as it did in say, the U.K. rave scene.

How about fashion? What style stands out to you from this era?

Clubs have always been an incubator for fashion, and of course, where people present themselves in however they wish to be seen, freed from the constraints that people feel in the real world. But fashion meant so many different things depending on what scene you were traveling in. In hip-hop, the desire was to always look fly, like you were getting money. In house clubs where dancing was a serious affair, the goal was to dress down because the ethos was against greed and more about sharing and community, through dance and coming together. With the Club Kids, fashion was about being outrageous, shocking and provocative. They were the punks of the 80s and 90s!

Same question but applied to the topic of technology? Was DJ'ing more or less the same or were innovations starting to make it easier/faster or perhaps more of a challenge to spin?

DJing from the 80s to the 90s remained a predominantly all vinyl activity. The changes in technology really didn't happen until the 2000 when CDJs started replacing turntables.

Back to the book. Now, who kept an archive of all these flyers? Were they largely handed out or slapped on lamp posts and wheat pasted on walls? How did such a trove of  pristine flyers get preserved? And why do you think there's such a fascination with this period in the city?

The seed of the book was from the flyers that I kept from when I first started going out and first started DJing, which coincided with each other. I saved flyers that bore my name, or that belonged to parties that meant something to me. From there, we reached out to people to fill in the gaps, particularly from scenes that I wasn't a part of.

Personally, I think it was the last period of true New York bohemia. Pre /9-11, pre-gentrification, pre-Brooklynization. Do you agree?Absolutely. Downtown has been a sort of frontier in the early 80s, SoHo and Tribeca mostly inhabited by artists. This book's period starts at the end of that reality and moves into a time when real estate prices started rising exponentially and creative people were getting pushed out of Manhattan.

Can every city be NYC now thanks to the web or do you still have to get off your ass and come here?
I don't think NYC is the clubbing capital of the world. The rest of the world has figured out how to have their own fun, and with much less of the obstacles that we have always had to fight — real estate costs, neighborhood compliance, the difficulty obtaining liquor licenses, dealing with corrupt and abusive police.