Jesus Christ: Jewish radical or bathrobe Republican? The "reason for the season" remains an enigma after 2,000 years

We reverse-engineered a pagan solstice party for this guy, so he must be important. But nobody can figure him out 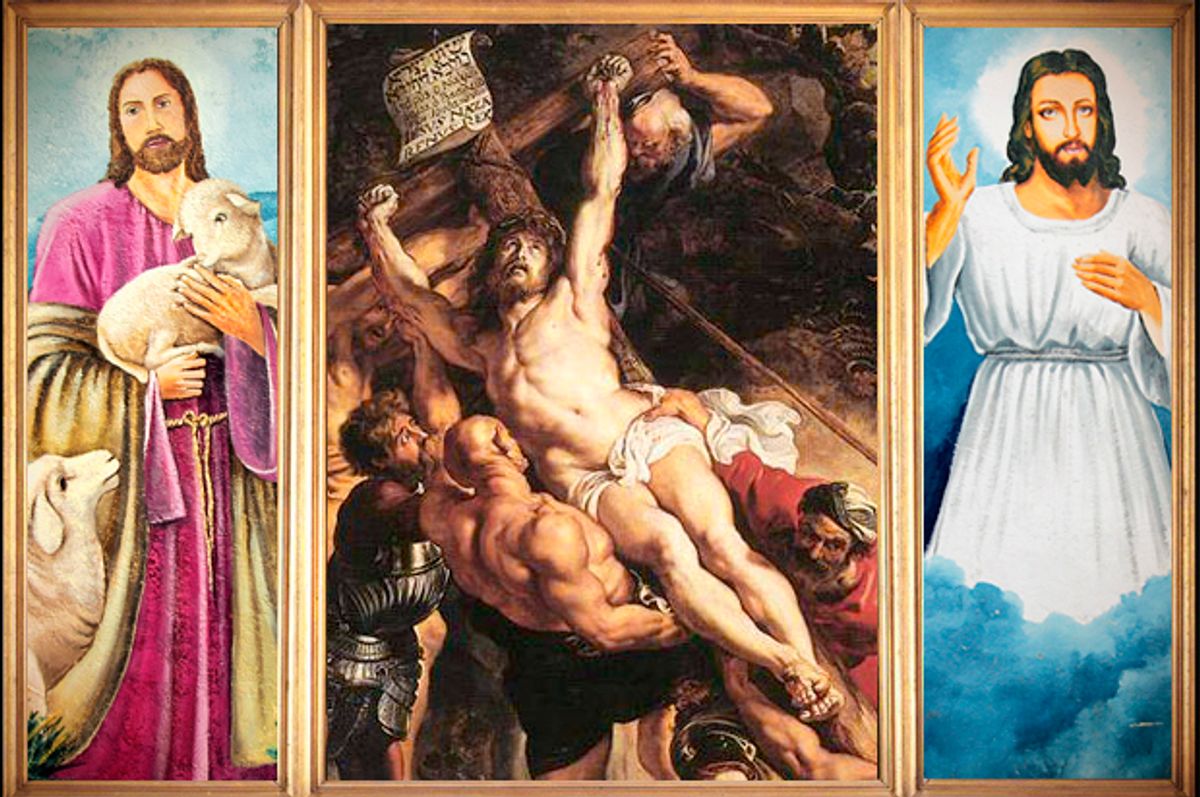 A few nights ago, on a sharp, cold evening in New York, I took my kids into St. Patrick’s Cathedral, the enormous Gothic Revival edifice on Fifth Avenue that stands at the heart of the Roman Catholic Church in America. My connection to the church is ancestral and vestigial at this point, and my children have been raised with no particular faith. Yet they both have the instinctive reverence of the young for things that are very large or very old, things that have the weight and mystery of tradition behind them. I told them that my father, their grandfather, had undoubtedly visited the same cathedral as a teenager after coming to the United States from Ireland. They helped me light a candle for the repose of his soul, although I have no clear belief that such a thing exists, and still less that giving the church a couple of dollars would offer his restless shade some peace if it did.

We were all surprised by the casualness of the crowds inside the cathedral, which has basically become an indoor stopover for Yuletide sightseers along the pilgrimage that leads from Bergdorf Goodman to Saks Fifth Avenue. People were milling around in bubbly groups, chatting in various languages and texting each other and taking selfies with the cathedral’s Christmas tree (modest) or its altar (not modest at all). Many of the younger men either didn’t know or didn’t care that you’re supposed to take off that stylish all-black Yankees cap or that retro-whimsical woolen beanie when inside a house of worship.

Hopeful signs were positioned at strategic intervals along the passageways through the nave, urging us to “Keep Christ in Christmas.” The Catholic hierarchy has tried out that slogan in recent years, almost but not quite aligning itself with “Jesus is the reason for the season” fundamentalist culture warriors or Fox News’ long-running war against the War on Christmas.

There were of course numerous images of Jesus Christ to be seen throughout St. Patrick’s. If many of the dogmatic distinctions between Protestants and Catholics that led to massive bloodshed in earlier centuries have been papered over or forgotten, the iconography gap remains as wide as ever. (Pictures of the Son of God: abomination or awesomeness?) There was no little wooden baby in the cathedral’s Nativity scene yet, however. I had to remind myself why that was so.

Perhaps only in that charming crèche, which has a simplicity and naturalness not otherwise found anywhere in St. Patrick’s, could I feel some evidence of Christ in the Christmas scene around us. As for the perplexing figure of the “real” Jesus Christ, either as a historical personage or as the centerpiece of an elaborate theological tradition, he seems more distant than ever from most of the institutions that use his name, and from the consumerist hyperdrive of the information economy.

Let me stop myself right there and admit the obvious: We know very little about the real Jesus — although most historians are inclined to agree there was such a person — and virtually all of it is open to interpretation. No one is likely to agree in total with anyone else’s take on Jesus, who has been variously depicted as an egalitarian Jewish radical, an apocalyptic cult leader, a puritanical scold and a proto-Republican who left the house in his bathrobe. (Plenty of modern-day Christians will tell you Jesus didn’t really mean to say that a rich man couldn’t easily enter the Kingdom of Heaven; surely Donald Trump could find a way to get that camel through that needle.)

Like everyone else who has ever expressed an opinion on this subject, from the disciples on down to the megachurch preachers and left-wing theologians of today, I am likely to construct my own Jesus from the available bits and pieces, leaving out the stuff I don’t want. History works like that anyway, and religion even more so. When we get to a historico-religious figure whose legacy has been vigorously contested for nearly 2,000 years, we have pretty much maxed out the dial on epistemological error and narrative ambiguity.

So, yeah, we all get to cherry-pick our own Jesus, and what any of them have to do with the actual Jesus, who definitely wasn’t born in the year 1 A.D., and almost certainly wasn’t born in December — but who quite likely did get dunked in the Jordan by John the Baptist, and was crucified by Pontius Pilate — is anybody’s guess. To me, he looks a lot like a primitive socialist revolutionary, preaching an impossible gospel that combined a vision of radical social equality with elements of deliberately contradictory self-abnegation and self-denial.

But that Jesus is unquestionably a product of 20th-century scholarship, and it’s only fair to observe that many other flavors of Jesus are available. In the Middle Ages, theologians were fascinated by Jesus’ dual status as both human and divine: Was his body like yours and mine, or did it have special qualities? Somewhat later, church thinkers began to focus on the exact mechanism by which Jesus’ death and suffering on the Cross served to cleanse all humanity of sin.

Such metaphysical obsessions look from this distance like efforts to dodge the big question that has haunted the Christian churches from almost the beginning: How the hell did we get from the Sermon on the Mount to this, with this signifying not just St. Patrick’s but Chartres and the Crusades and the suburban megachurches of Texas and the general air of closed-minded, incurious, fearful hypocrisy that characterizes a startlingly high proportion of American Christianity? Of course that’s too broad a brush: Christianity was always diverse, and as it has begun to fade from its dominant position in American life, it has become more so. I’m not religious in any official way, but I still feel the pull of the social-justice gospel that remains a dominant element of the African-American church and a potent subset of the Catholic Church, and can also be found among mainline Protestants and even evangelicals (not all of whom are sanctimonious trolls).

You can spin the purported words and deeds of Jesus in various ways to make him look like a pre-millennial lunatic, a zealot or a dispenser of sexual rules and social mores. But try as you may, you can’t make him look like someone who was comfortable with wealth and power, or who valued stability and social order. You can’t make Jesus not be a rebel outsider who stood with the downtrodden and dispossessed and against all forms of religious and civil authority. The fact that the worldwide faith founded in his name grew first immensely powerful and then increasingly irrelevant, that it has become synonymous with doddering, hidebound fortresses of calcified authority, disconnected from modern social life and devoted to defending the morality of the recent past, is so far beyond ironic there’s no word that can describe it. Blessed are those who hunger and thirst for cluelessness, for they shall be filled a thousand times over.

It’s a truism to say that if Jesus returned he would be startled to encounter the people and institutions that claim his legacy, but that doesn’t make it untrue. Religion is not unique in this, to be sure. Human history could almost be described as a chronicle of hypocrisy and failure, a record of our collective inability to live up to our ideals. Karl Marx’s vision of human liberation and Lenin’s blueprint for a worker-peasant democracy produced the most oppressive bureaucratic state the world has ever seen. The preamble to the Declaration of Independence, the single greatest action statement of Enlightenment philosophy, was written by a man who owned other human beings as property, knowing perfectly well it was morally indefensible.

It’s outrageous that Donald Trump is permitted to depict himself, in some nominal way, as a follower of Jesus Christ without provoking widespread howling and vomiting. It’s an outrage that a majority of white Americans who consider themselves followers of Jesus Christ twisted themselves into voting for a man who has promised to persecute the powerless, shun the strangers, drive away the hungry and the vulnerable. None of this is anything new, of course. Ever since the real Jesus, whoever he was, disappeared behind his symbolic death, his messianic promise of the Kingdom of Heaven has been used to build kingdoms here on earth.

Christmas is barely even an allusion to Jesus Christ. It’s a pagan celebration of the winter solstice, presided over by a red-suited elf-god. At some point it got reverse-engineered into a birthday party for a half-mythological baby whose more important accomplishment was his death. If the church asks us to keep Christ in Christmas, we might respond that he was never there in the first place. But as I stood looking at the empty cradle in the St. Patrick’s crèche, I reflected that the incoherent innocence of the Christmas story — the way it gives us Jesus as an infant, stripped of history and his tangled and contradictory afterlife — is the source of its power.

In the Christmas season we seek reassurance, repetition and ritual; we watch movies we’ve seen dozens of times before, and football teams we don’t care about. We embrace that strange sense of “Christmas Carol” suspended time that makes childhood and adulthood, past and future, seem to merge. If Christmas has nothing to do with the real Jesus, it allows us to connect, briefly and vaguely, to the idea of Jesus and to the possibility of human redemption he seemed to embody. It’s only a moment, a shared shimmering dream, and then it’s gone. But it’s a gift.